We have come to expect "big" from Yury Butusov.

We know he takes bold approaches to text, applying cuts, rearrangements and duplications to the works of no less than Shakespeare, Anton Chekhov and Bertolt Brecht. We aren't surprised when this director comes at us with thundering music and wild, almost unhinged performances.

This is Butusov's element, a swirling cauldron of outsized, "in-yer-face" theatrical devices. A tornado of sounds and images.

But I am inclined to think that Butusov's "Flight" at the Vakhtangov Theater outdoes anything he has staged up to now. The sense of abandon in this interpretation of Mikhail Bulgakov's play, about what can and cannot be escaped when Russia descends into chaos, sets the mind and, particularly, the senses reeling.

Bulgakov's play, written in the late 1920s, responded to the cataclysms that afflicted Russia during the Civil War following the revolution. Retreating with the White Army, so to speak, it takes place in Crimea, Istanbul and Paris. In it personal conflicts mix with political realities to put human beings through a meat grinder.

But "Flight" was not just a portrait of the aftermath of the revolution. It dug down into the sores that remained in society after that historical period passed. It included a vantage point that anyone might have had in the late 1920s, one stricken with a deep sense of loss and foreboding.

I will surprise no one by suggesting that current political and social trends often tend to echo events of the 1920s and 1930s, sometimes with devastating similarity. For that reason, Butusov needed do nothing to make this piece a searing commentary on the world we inhabit. He left it entirely in the 1920s and let the comparisons arise on their own.

Bulgakov's story was the least of Butusov's concerns, although most of the characters are in place. They include Serafima (Yekaterina Kramzina), the abandoned wife of a White general; General Korzukhin himself (Valery Ushakov); the White commander Roman Khludov (Viktor Dobronravov); and the sensitive St. Petersburg intellectual Sergei Golubkov (Sergei Yepishev), who follows Serafima from country to country to save her from herself and others.

Bulgakov wrote the play as a series of eight dreams. Butusov, working with designer Alexander Shishkin, presented them as nightmares.

The first is one of the simplest and most devastating.

Serafima (played by Kramzina with astonishing power and understatement) sits motionless for what seems an eternity as she stares unblinking into the hall while other characters race around her manically.

In time she begins to shake and shudder as the drama of the event unfolding affects her more and more deeply. Butusov and his actress maintain this incredible slow burn for nearly 15 minutes before shifting the tempo. 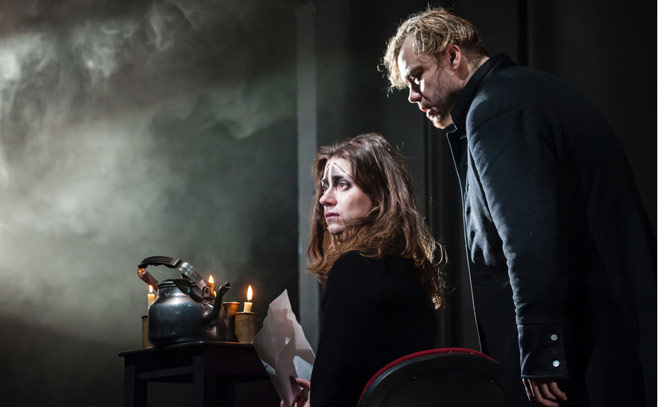 It is one heck of a challenge thrown at spectators, who, surely, by habit, expect a story to begin emerging. It never really does.

Yes, Bulgakov's dialogues are here, more or less, along with the characters who speak them. But words are pushed into the background. They are music, if you will, impulses of energy.

The "story" that we get is of a poor woman besieged by the world, driven to a frenzied rage.

The fact that Kramzina is followed by an ovation when she leaves the stage says much about the power of her performance, the ability of Butusov to generate understanding through non-verbal images, and the readiness of an audience to accept the unexpected.

Throughout subsequent scenes snippets of text resound almost out of context in ways that provide epiphanies for the play. Some, drawn from Bulgakov's stage directions, seem to have particular force.

"I am sick, only I don't know with what," Khludov declares as the world he seeks to defend crumbles around him.

"One can see fear and hope in people's eyes," another says.

"My dreams become all the more difficult," Khludov affirms at another point.

These are characters' confessions, but they are also definitions of Butusov's production.

This show is daunting and obscure. In other words, it is precisely what one would expect to encounter in a disintegrating world filled with violence and uncertainty.

Butusov's "Flight" tells Bulgakov's story, but not through narrative and plot. This extraordinary production throws characters and spectators into the same sea of chaos and lets us all experience what that feels like.