When the Stanislavsky and Nemirovich-Danchenko Musical Theater announced last September that it had picked Luigi Cherubini's "Medea" as one of its new opera productions for the current season, my reaction was that it had bitten off more than it could chew, taking on a work for which it couldn't possibly assemble an adequate cast.

But I was wrong. Not only did the theater come up with a singer splendidly suited to the enormously taxing title role, but, at least at the performance I attended, had a supporting cast almost entirely able to cope with the rigors of Cherubini's score.

Led in stylish and stylistically correct fashion by the Stanislavsky and Nemirovich-Danchenko's principal conductor, Felix Korobov, with first-rate performances by both orchestra and chorus, and offering an impressive staging by director Alexander Titel and designer Vladimir Arefyev, it all added up to what must surely be the best new operatic production so far this season in Moscow.

Italian-born Cherubini spent most of his long career as a composer and teacher in France. And it was there that he wrote "Medea," which first appeared in Paris in 1797. Based on Euripides' tragedy of the same name and 17th-century French playwright Pierre Corneille's reworking of its tale, the opera was set to a French libretto with a great deal of spoken dialogue.

Though "Medea" met with approval at its premiere, it failed, at least until recent times, to achieve lasting success. Revived in Frankfurt, Germany, in the 1850s, its spoken dialogue was replaced with sung recitative, composed by a certain Franz Lachner. In that form, and translated into Italian, it was taken up at the beginning of the 20th century by Milan's Teatro alla Scala. Half a century later, in the same form, its title role became a cornerstone of the repertoire of Maria Callas and, largely thanks to her, a long list of other distinguished sopranos have gone on to perform "Medea" on nearly every major operatic stage in the world.

Designer Arefyev has provided the Stanislavsky and Nemirovich-Danchenko with a very effective minimalist stage picture. Piled in front is an array of so-called tetrapods, three-legged (not four-legged, as the name suggests) objects of ancient design that, in cast concrete, are widely to be found today in use as breakwaters, including along the shores of the Black Sea port cities of Sevastopol, Novorossiysk and Sochi. Towering above them in the rear is a bridge that stretches across the entire width of the stage. 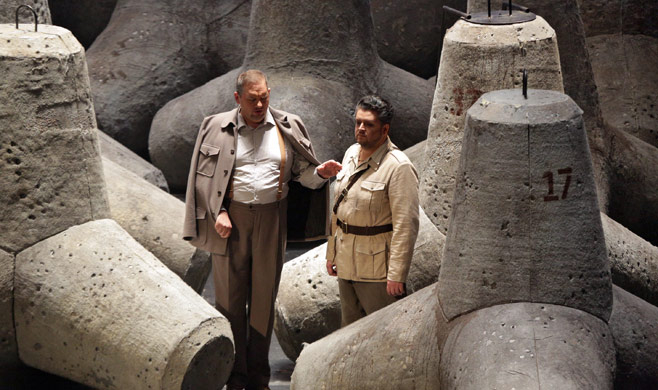 Director Titel makes full use of the setting's numerous possibilities to tell the opera's story in a straightforward manner and with extreme clarity.

For its production of "Medea," the Stanislavsky and Nemirovich-Danchenko has chosen the Italian version of the opera. And though the original French version has enjoyed a quite successful revival in recent years, the theater's choice was undoubtedly a wise one, as hearing even imperfectly sung Italian is certainly preferable to listening to long stretches of imperfectly spoken French.

At the performance I attended, the title role was taken by Khibla Gerzmava. During her two decades at the Stanislavsky and Nemirovich-Danchenko, Gerzmava has mostly been heard as a brilliant interpreter of lyric coloratura roles, notably Violetta in Giuseppe Verdi's "La Traviata" and the title role in Gaetano Donizetti's "Lucia di Lammermoor," for which she received a Golden Mask Award.

Over the past few years, however, Gerzmava's voice, like that of her very similarly gifted contemporary, Anna Netrebko, has filled out considerably in its lower register, allowing her to take on roles that call for a dramatic soprano. Medea is certainly one of those roles and what she produced in the way of tonal splendor and vocal drama on the night I heard her rivaled the recorded performances of her great predecessor, Maria Callas. Moreover, Gerzmava acted the role with absolutely overwhelming conviction, reminding me, as well as others, of the great Italian film actress of Anna Magnani.

At the theater's premiere earlier this season of Modest Mussorgsky's "Khovanshchina," I singled out for praise the Marfa of Ksenia Dudnikova. And hearing her as Medea's maid, Neris, I was once again struck by a voice, as well as a winning stage manner, that practically puts her in a class by herself among mezzo-sopranos currently on the Moscow operatic stage.

Both of the principal male members of the cast, tenor Nikolai Yerokhin, as Jason, and bass Felix Kudryavtsev, as Creon, brought voices of just-right quality to their respective roles. But both had a tendency to slouch on stage, which rather annoyingly detracted from their portrayals of a heroic Argonaut and a monarch of the ancient Greek kingdom of Corinth. Surely, that deserves some correction.

"Medea" next plays on June 21 and July 29 at 7 p.m. at the Stanislavsky and Nemirovich-Danchenko Musical Theater, located at 17 Bolshaya Dmitrovka. Metro Chekhovskaya. Tel. 495-723-7325. stanmus.ru.