On Sunday starting at noon, cyclists will begin to gather on Prospekt Akademika Sakharova in central Moscow for the 5th annual Moscow Bike Parade.

Around 20,000 participants are expected for this year's ride, making it the largest to date. If last year's partcipants are any indication, spectators can expect plenty of interesting costumes, hats, body paint and dogs in bike baskets. All types of bikes — from mountain and road bikes to cruisers and tandems are welcome.

The yearly event is organized by the Let's Bike It! project, which aims to develop cycling infrastructure and encourage road safety in the Russian capital.

"Some people say that our first cycle parade, on May 20, 2012, changed everything," said Vladimir Kumov, leader of the Let's Bike It! project. "You could say that was the day when Moscow started to seriously talk about cycling in the city, rather than just laughing it off as impossible."

The event has grown significantly since the 2012 event, in which 8,000 people participated. This year's ride will involve blocking off not only the Boulevard Ring, but also the Garden Ring around central Moscow. The city Department of Transportation told local web portal The Village that the route was not chose by chance. "In the near future, we plan to make the Boulevard and Garden Rings more convenient for pedestrians, cyclists, people on public transport and drivers. We will soon launch a bike lane on the Boulevard Ring for a trial period," the department said in a statement.

From noon until the start of the event at 2 p.m., a festival will take place on Prospekt Academika Sakharova that will include prizes, master classes and a live performance by Brazilian drummer group SambaReal.

There will also be a special "selfie zone" where cyclists can promote biking and on social media. Each selfie-taker will be given a board where he or she can write a dream about the development of cycling in Moscow before taking the picture and uploading it to social media with the hashtag #завелобезопасность (#bikesafety).

The organizers expect several Moscow city officials as well as representatives from the French and German embassies to take part along with the general public. Everyone over the age of 14 is welcome — Kumov said his 85-year-old grandfather is planning to participate.

Because of traffic restrictions, the only entrance to Prospeckt Academika Sakharova will be from the Garden Ring. The route of the parade will follow the direction of traffic around the boulevard ring, then continue on to the Garden Ring. The cycling group will be accompanied by police on motorcycles and other volunteers to ensure the safety of all participants. 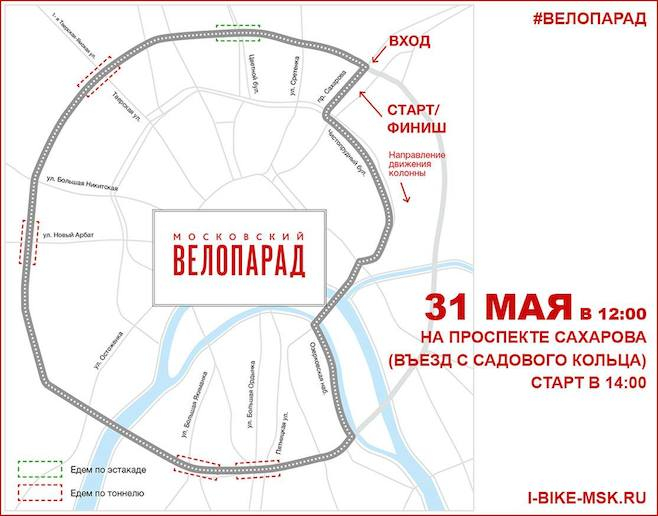 "Sure, there is still a lot to be changed in Moscow," Kumov said. "It's still quite dangerous to cycle here every day. But everyone who takes part deserves a huge thank you — they're making Moscow clearer and safer for cyclists."

For more information about the Moscow Bike Parade, check out the Facebook event page. Participants are strongly encouraged to ride safe by wearing helmets and bright colors and bringing their own bike lights.

How to Rent, Buy and Transport a Bike in Moscow

The fifth annual Moscow Bike Parade will take place on Sunday. If you would like to participate, but don't yet own a bike, check out these suggestions...
news

Moscow Running Clubs to Get You Out the Door

f you're inspired by the warm early summer weather to spend more time outdoors, there's good news, because whether you want to start training in earnest...
Moscow treasure

Our favorite chef is worried about our health, so she suggests starting the new year with beets, pomegranate and wild rice.