YEREVAN — One Russian philanthropist has just completed the trial run of a unique investment vehicle: a bus filled with clowns.

Ruben Vardanyan, founder of investment bank Troika Dialog, sponsored a visit to Armenia by clown doctor Patch Adams and 20 clowns from around the world this past week. They were joined by Maria Yeliseyeva, founder of Russian children's charity Maria's Children, who added 10 clown participants to the colorful delegation. Yeliseyeva introduced Patch, with whom she has been working on clown trips in Russia for the last 30 years, to Vardanyan at a charity event in November.

Vardanyan said he was motivated to invest in the visit by ideals he shares with Patch and a desire to affect the long-term thinking of average Armenians.

"I believe in love," Vardanyan said. "And I believe if people have a positive attitude they can change everything. I like it that Armenians who are not traveling abroad get to see other types of cultures and attitudes. I think it's important … to be successful, it's necessary to be open minded."

The tour brought clowns from eight countries to 16 orphanages and hospitals in Yerevan, Gyumri, Vanadzor and Dilijan. They made contact with thousands of children of all types — including those with Down syndrome, cerebral palsy and autism — as well as those whose parents are either too poor to care for them or have gone abroad to seek work.

The clowning involved amateurs and professionals, who dressed in garish clothing, behaved absurdly and showered children, parents and health care workers with balloons, bubbles, music and gags. Patch also lectured in Yerevan at the American University of Armenia, and in Dilijan at the UWC College, which was founded by Vardanian and his wife Veronika Zonabend.

Typically philanthropic projects by  are bigger and more tangible than a bus full of clowns, and often have an element of self-sustainability: He has funded infrastructure development in Dilijan, is a founder and supporter of the Skolkovo business school in Moscow, and financed the construction of a 6-kilometer cable car to the Tatev monastery in Armenia. The clown trip created new challenges: cross cultural and logistical, but is consistent with his reputation for favoring investments with long-term results.

Vardanyan said that at first the country's elite was skeptical. "Many people in Armenia told me, 'Don't bring Patch. Traditional Armenians will feel very bad. How can we do this?' There was strong resistance from some people saying it won't be possible," he said. "But my staff and friends convinced me it was the right thing to do."

The staff handling the hyperactive visitors expressed no regrets, and enjoyed learning a new idiomatic expression in English: herding cats. 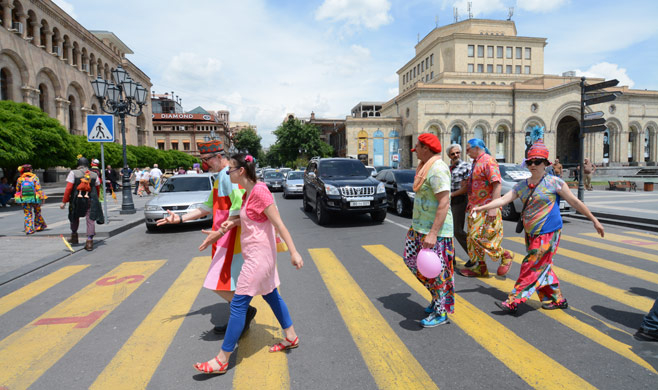 Patch, who has been leading clown trips around the world for 40 years while raising funds to build his dream hospital in the United States, said he saw immediate results from the visit to Armenia.

"People are the same everywhere: mothers squeal with joy as we entertain their sick children. Grandmothers squeal even louder," Patch said, adding that the interactions also helped parents and staff improve their loving skills.

The clown trip started with a visit to the Genocide Memorial in Yerevan. Vardanyan's grandfather was one of the 30,000 children left without parents by the time the terror had ended in 1924 and was raised in an orphanage run by American missionaries. Patch wept like a baby as he stood in front of the eternal flame contemplating the suffering. For contrast, he labeled the rest of the tour the "Love Memorial."

A man whose net worth Forbes says is approaching 1 billion dollars, Vardanyan showed no inhibitions in donning a clown suit and joining the effort to bring joy. And since this was the first international clown tour to Armenia, Patch rolled out the big guns — "playmates" as he likes to call his inner circle of veteran clowns — who have done an average of 27 years each of clown globe-trotting with him.

Ginevra Sanguigno is based in Milan, Italy and had clowned in 12 countries before joining the Armenia tour. She said the speed at which clowns and Armenians connected was faster than other countries due to the natural sense of musical rhythm the people have.

"The Armenian national instrument, the duduk, which is said to mimic the sound of a mother's voice that the fetus hears in the womb, could be why they quickly responded to our efforts to make contact," Sanguigno said. "We accompanied our clowning with a variety of instruments, including a West African drum, two accordions, a kazoo and several harmonicas."

Cees Kranen, a tall man from Holland whose clown idiom wears an aviator cap and drags a rubber chicken behind him wherever he goes, said that to really maximize the value of the clown tour, the effort has to be repeated.

"We are like a drop of joy that creates a ripple which can turn into a tsunami of love, transforming loneliness and misfortune into something beautiful," Kranen said. "But coming back again is key to making it work. In Russia, where I have clowned for many years, the children in the orphanages talk about our visits for six months after we leave, then begin to build excitement in anticipation of our next visit six months before it happens."

Vardanyan is convinced the seed has been sown.

"We went with the clowns to one orphanage and when the staff saw what we were doing they said, 'OK, we could be doing this also, once a month, being not serious, laughing, doing more for the kids, making them relax,'" he said. "They realize it doesn't require a lot of investment …just being in a good mood and the willingness to act a bit childish."

Zonabend, who is chairman of the board of UWC Dilijan College, saw the same effect.

"Patch's visit to UWC Dilijan was very meaningful and had a huge impact on the students," she said.

"Some plan to participate in clowning activities during the summer."

The extreme dedication of the clowns was typified by another Dutch chicken-bearing clown, Marleen van Os. A health care worker at a center for the disabled, van Os also volunteers in her free time to help individuals with disabilities and spends much of her vacation time on clown trips. When she does take time off from helping others to go to a restaurant, for example, she says she inevitably winds up sitting next to a table of children with Down syndrome. 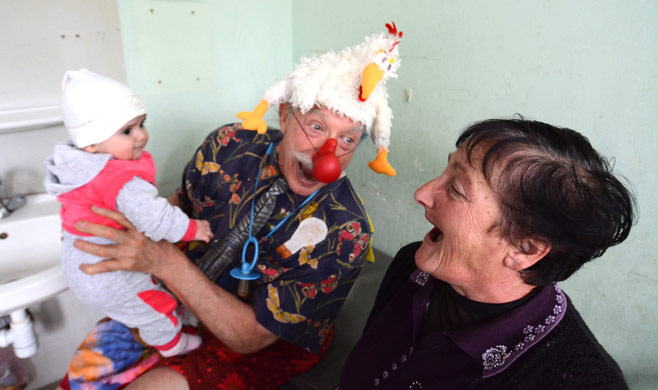 "Trips like this one give me perspective, and I share that with my colleagues back home," said van Os. "They complain about a lack of funding and staff and I describe the difficult conditions in other countries and that makes them more appreciative of what they have."

Yeliseyeva of Maria's Children decided to help the health care workers in Armenia by including prominent child psychologist Alexander Kolmanovsky in her Russian delegation. While the clowns were doing their shtick with the children, he ran seminars for parents and care givers to raise their understanding, share experiences and help build confidence.

Zhorik, a first-time clown in the Russian delegation, who was unable to provide a last name because he doesn't have one, was mostly impressed by the instantaneous return on investment.

"I spent a week dressed and behaving in a way I never would have before," said Zhorik, "but my clown personality gave me the power to instantly connect with adults and children. I'll savor the memory of the smiles and laughter I created."

By the end of the trip, Vardanyan confirmed the broader effect of the effort.

"Everybody received the clowns positively," he said. "It's been really good for Armenians to see that adult people can behave differently."