There are many reasons to be intrigued by "Revolt" at Praktika Theater.

It is the latest production to involve the Dmitry Brusnikin Workshop, a group of now-former students who have officially formed a new, professional Moscow theater troupe.

It is staged by Yury Muravitsky, one of Moscow's most interesting directors, who loves to tweak spectators' expectations.

And, in what is arguably the most convincing reason, "Revolt" is built primarily around two radio plays by the well-known poet Dmitry Prigov, a central figure in the cross-genre artistic movement generally known as conceptualism. Prigov is not someone whose work we see on Moscow's stages.

The title of "Revolt" could be translated any number of ways. Were it a show about a political event, it would be "Coup." It could also be rendered as "Upheaval," "Rebellion," "The Overthrow," or even "Revolution." In fact, the title of the second piece played out during this performance is just that, "Revolution."

But the notion of rebellion and revolt is what comes closest to what the show is about.

Prigov wasn't writing about political turmoil. He had in mind the overturning of opinions and preconceptions of art. Most of his works sought to undermine comfortable notions of literature, poetry, painting and performance, and — most importantly, perhaps — our way of seeing and perceiving them.

That is part of the irony embedded in "Revolution," a short piece that plays with the notion of a Soviet-era "demonstration," that is, celebration, of the Revolution.

A bunch of young people carry signs and shout slogans commending freedom, while offering up lusty "Hurrahs!" to flatter the ego of the state.

The point Prigov presumably was working toward was that there was nothing revolutionary at all in this act of marking the anniversary of a decades-old revolution. Revolution by this time had become rote. A struggle for ideas had become a struggle against them.

Muravitsky and his crew of young actors put the revolt back into this tongue-in-cheek "Revolution."

They turn Prigov's verses into songs played and sung by the entire company. As the evening advances, the music and the passion it is played with increases manifold. Light ditties become furious musical attacks. Parade music transforms into Fascist marches.

Bellicose chants of "Freedom!" intertwined with frenetic shouts of "Beat!" turn everything transpiring on stage into a searing, even off-putting theatrical onslaught.

This show goes way over the line of propriety. I saw plenty of uncomfortable spectators sitting around me, looking down or aside to avoid actors' gazes. That only made the actors crank up their rage. 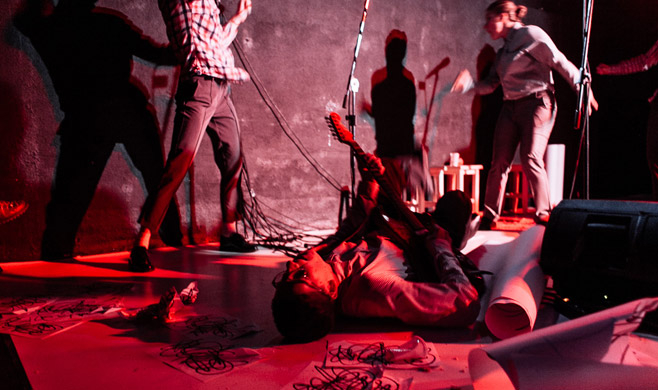 "Revolt" made audience members feel uncomfortable. That was the idea.

When rehearsing this production, Muravitsky was quoted on the Teatral website as saying there was little in this work to laugh at.

That is precisely what the second half of "Revolt" is up to. It is there to mock, to cause revulsion in an audience sitting comfortably in the cushioned seats of a theater hall.

By comparison, the first half of "Revolt" is milk and cookies.

Titled "I Play the Accordion," it is a screwy, tongue-in-cheek piece about some young people on stage trying to goad an audience into participating in their performance.

It reaches its apogee as the main performer ostensibly drags a reluctant girl on stage and begins to ridicule her, making her undress, and shouting abuse at her when she escapes and runs out of the hall.

You see what Muravitsky was up to — setting the stage, literally, for the theatrical attack he would mount a little later. But I found myself hearing Prigov's text as old-fashioned and riddled with cliches about the humor of violence.

The actors, locked into the mockery, to which their director pointed them, did a fine job of running roughshod over propriety here as well.

But if I thought the second half of "Revolt" was the most scathing example of political ferocity unleashed on stage this season, I thought the first half remained trapped in the limits of its stereotypes.

Let that take nothing away from "Revolt," however. At its best, this show throws lightning bolts.