This article first appeared in the online magazine The Calvert Journal, a guide to a creative Russia.

Based on Alexei Tolstoy's novel of the same name, "Aelita" is considered a classic not only of Soviet filmmaking but world cinema in general. It tells the story of an engineer, the unusually named Los, who creates a space craft capable of flying to Mars. Los sets out for the Red Planet in the company of Gusev, a Red Army soldier, and the sleuth Kravtsov. On Mars, the trio encounters an alien humanoid civilization. While Gusev plots a revolution, a love affair blossoms between Los and Aelita, the daughter of the Martian leader.

The novel "Aelita" is regarded as an original work of fiction with strong topical resonances, alluding as it does to the real-life Yuzef Dominikovich, a rocket engine developer, while also featuring an ideological dimension (encapsulated in the uprising of the planet's downtrodden denizens) and referencing the proto-transhumanist teachings of Konstantin Tsiolkovsky. Watching the film today, however, you can't help but think of Georges Melies' "A Trip to the Moon," whose identical plot conflict and comparable visual realization predated Protazanov's creation by 22 years.

Initial attempts at a moon landing end in failure. A rabbit launched into space perishes en route. A second rocket, this time with a cat on board, vanishes without a trace. The third, manned by a small party of scientists, proves a success. The moon — which, in contrast to Mеliеs' film, turns out to be devoid of alien life — is colonized by the U.S.S.R. And on the way back, they even find the cat, long presumed dead, alive and well.

This naive Soviet pop-sci-fi flick makes for impressive viewing even today. And for good reason. It is this very film that gave rise to the practice, now standard in sci-fi filmmaking, of employing real-life scientists as on-set consultants (with Christopher Nolan's "Interstellar" being a notable case in point). The scientific aspects of Cosmic Voyage were supervised by none other than Tsiolkovsky, who created 30 technical drawings of the rocket for the film.

A seminal proponent of the Soviet documentary-meets-sci-fi genre, it was actually Klushantsev who pioneered this hybrid, combining elements of pure documentary (popular science) with fantasy (sci-fi). His films juxtapose "talking heads" documentary and laboratory footage with carefully choreographed scenes set on alien-inhabited planets. Klushantsev's Planet of Tempests made such an impression on US filmmakers that it ended up spawning two American adaptations. The first of these, called Voyage to the Prehistoric Planet, was produced in 1965 by Roger Corman; the second, actually an adapted version of Corman's film, was directed by Peter Bogdanovich and released in 1968 under the title Voyage to the Planet of the Prehistoric Women. According to a story that sometimes does the rounds in film circles, George Lucas, who regarded Klushantsev as the godfather of Star Wars, desperately wanted to meet the Soviet director, but ultimately the two sci-fi pioneers never crossed paths.

Tarkovsky's film tells the story of Kris Kelvin, a psychologist who has travelled to the space station Solaris to evaluate whether the scientific mission being conducted there should continue. The scientists on board the station have been driven to the verge of madness, and soon Kelvin finds himself haunted by a manifestation of his beloved, who had committed suicide back on earth.

Needless to say, no overview of the Soviet sci-fi tradition would be complete without mention of Tarkovsky and his films "Solaris" and "Stalker," both classifiable, to some extent, as science fiction. Like the rest of Tarkovsky's filmography, these two works have received extensive analysis in a plethora of articles and research papers, and it's difficult to add anything new here. Coming on the heels of the shelved "Andrei Rublev," long withheld from release by the Soviet government, "Solaris" enjoyed such a degree of success that Tarkovsky was effectively given carte blanche for any future projects. Exploiting these newfound opportunities as he saw fit, Tarkovsky made "Mirror" the most unusual and personal film in his filmography. 2002 saw the release of Steven Soderbergh's eponymous, almost shot-by-shot remake of Tarkovsky's work, with George Clooney in the starring role, but Soderbergh's "Solaris" lacks the artistic and conceptual power of the original. 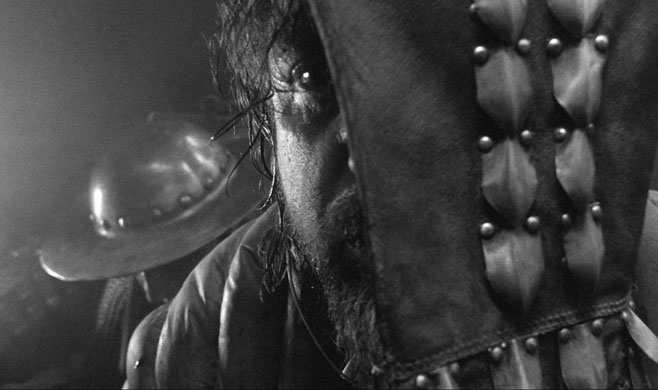 Hard to be God

Leonid Yarmolnik, above, stars in Alexei German's film "Hard to be God."

This joint Soviet-Polish production revolves around a mission to Saturn. A big corporation  succeeds in creating humanoid robots, and, paying no heed to the skeptics, decides to put them into mass production. A crew of robots and humans — headed by a captain named Pirx — is sent out into space to launch two satellites into Saturn's rings. But, true to the finest traditions of the genre, things don't go quite to plan.

Even today, this film feels contemporary — and all because its Polish director, Marek Piestrak, strived to achieve maximum artistic realism. Costumes and models were devised on the basis of existing American and Soviet prototypes. Another element contributing to the contemporary feel of the film is its electronic soundtrack, written by progressive Estonian composer Arvo Part, which was an influence on Prodigy's "Smack My Bitch Up."

The action of this film, whose Latin title translates as "Through the Thorns to the Stars," is based on a screenplay by cult Soviet sci-fi writer Kir Bulychev and is set in deep space and on fictional planets. A reconnaissance craft — named Pushkin in homage to Russia's greatest poet — encounters a derelict starship. Inside is a humanoid woman with inhuman abilities — teleportation, telekinesis, and so forth.

Richard Viktorov directed the original 1981 version of this film. He died soon afterward in 1983 while shooting "The Comet," another sci-fi movie. Richard's son, Nikolai Viktorov, released a new version of the film in 2001, having remastered the sound and special effects and shortened the running time by cutting several set pieces laced with Soviet ideology.

Destination: the city of Arkanar on an unnamed planet

On a planet mired in its own Middle Ages, chaos, darkness and degradation reign. The situation is carefully monitored from Earth, and when it finally appears that a renaissance is imminent, an operative named Don Rumata Estorski is sent to the planet to investigate. Don Rumata must remain a detached observer of events, but, witnessing instance after instance of rabble-rousing and lawlessness amongst the local inhabitants, he breaks his neutrality and interferes in the historical process of an alien civilization.

This adaptation of the Strugatsky brothers' novel was due to become Alexei German Sr.'s directorial debut. But when Soviet tanks rolled into Czechoslovakia in 1968, the story of how power in the city of Arkanar is seized by the "black brotherhood" took on an overly anti-Soviet cast. It was only in the late 1990s that German reprised work on the film, and continued to do so until the end of his life. His son, director Alexei German Jr., put the finishing touches to the project.


This article first appeared in the online magazine The Calvert Journal, a guide to a creative Russia.