Nine months after Russia imposed a ban on food imports from most European countries and the United States, Brad Farmerie, executive chef at upscale eatery Saxon + Parole, has only a few complaints.

In Moscow last month to develop a new spring menu for the Moscow branch of the New York restaurant, Farmerie said that the sanctions have served to reinvigorate one of his main goals for Saxon + Parole, which is to source ingredients locally.

When the restaurant first opened in November 2013, Farmerie said that he used more imported ingredients than he would have preferred, partially because the clientele expected it. "We saw that a lot of our guests wanted imported, they wanted European, they wanted American, and so we drizzled some of that in," Farmerie said, but now the restaurant has to use ingredients made in Russia.

Not that it isn't a challenge. "In New York it's very easy. You meet the actual farmers who are providing it, the butchers who are getting meat direct from the farm. That connection is much easier there than it is here," Farmerie said.

The differences in growing seasons and product availability means that the menu of Saxon + Parole Moscow is slightly different from the New York branch, although the look and feel of the restaurants is for all practical purposes the same.

"With food, we've realized that we have to have the same intentions, but the dishes can't necessarily be exactly the same. The seasons are different, availability is different, cost is different," Farmerie said.

He also relies heavily on the experience of Alexander Poroshenkov, the chef at Saxon + Parole Moscow. The two work closely together, with Farmerie visiting Moscow every couple of months and Poroshenkov spending some time in New York. They also have weekly Skype calls where they discuss availability of products and what produce is in season.

"Before I come over, for instance, I send Sasha a list of new dishes I want to work on and he gives constructive feedback based on his experience as a Russian chef, and then we go to the market and we look at the vegetables, look at the meat, sometimes we go off in a different direction just based on what that influence is."

That influence lately has included finding ways to replace products that are no longer available.

"We've had some challenges since last summer when the sanctions were enacted," said Poroshenkov. "The things you can buy in the market are the same, but there are things like Italian cheese, Italian meats, fish from France, Italy … there's no stability in the market for ingredients of the same quality."

Beef is not generally a problem, Poroshenkov said, noting that quality Angus beef cows are being raised in the Bryansk and Voronezh regions, but seafood is another story.

"Fish, now, we have fish from Russia, but they are different kinds [than those from France or Italy] and the quality — it's not the same, and the availability isn't stable."

Farmerie added that an additional problem with fish is the way it has to be treated. "It's so delicate that if it's mishandled at any stage along the way, it's ruined. Whereas beef and lamb are a little hardier and have a longer shelf life." 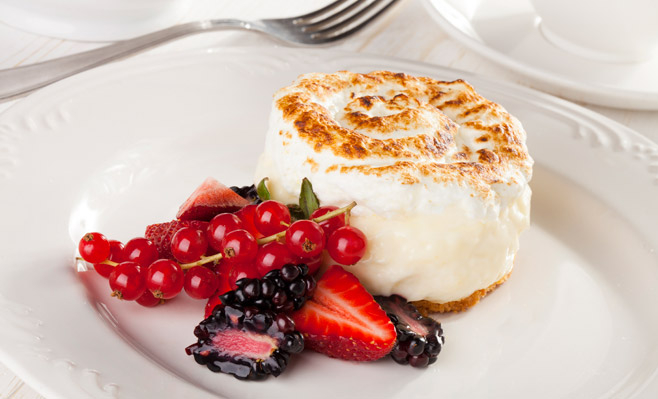 Fresh, lighter desserts with seasonal fruit will feature on the new menu.

But these logistical difficulties do not mean that Saxon + Parole is cutting fish from its menu entirely. They have just forced the chefs to think outside the box.

"We've tasted a lot of local smoked fish, which I think is a great application, could be good for an appetizer. We said we almost want to do like a charcuterie platter, but with fish," Farmerie said, noting that finding the best dishes for the Moscow restaurant means "knowing what the strengths and weaknesses are of the local market and being able to apply those."

The Moscow Saxon + Parole was the first branch of a high-end American restaurant to open in the Russian capital, capping a wave of expansion by American fast-food companies into the Russian market. When the restaurant opened in fall 2013, it was impossible to get a table. Reservations had to be made weeks in advance.

Now, nearly two years after its opening, getting in at Saxon + Parole may no longer require long-term advance planning, but on a recent sunny afternoon, the dining room was crowded, with tables spilling out the open doors onto the sidewalk.

Farmerie says that the restaurant is hitting its stride, and that he is happy with the clientele Saxon + Parole is reaching.

"We were aiming for the same audience we get in New York, which is locals — we want to feed the people who are right down the street — but we also want to be a destination for people who are traveling, for them to come and see what is happening here. What's nice now is that we have a big, big collection of regulars — a lot of expats, a lot of locals — and also tourists, so we're getting the kind of crowd we would like."

And keeping the offerings fresh is one way to keep them coming back.

Saxon + Parole's new spring menu, which will be launched May 18, will keep some old favorites, but also highlight the flavors of the season with fresh salads.

"I'm never a fan of doing a whole menu change," Farmerie said. "It's kind of like throwing out the baby with the bath water. We have a lot of rock-star dishes so those will stay on, but we're always looking to update the sides, the salads, the garnish. We can really get asparagus, peas, ramps, rhubarb, all those beautiful spring flavors can be highlighted."

The new menu will also respond to changing food trends, which in New York has meant a shift away from the emphasis on meat and whole-animal butchery seen in the past few years toward vegetarian main courses and lighter, healthier options. In Moscow, it involves moving away from molecular gastronomy and back toward what Farmerie called "rustic food."

Fortunately for Saxon + Parole, these shifts, like the sanctions, serve to reinforce Farmerie's philosophy of creating dishes that are innovative but simple while using locally sourced ingredients.

Said Farmerie, "It just kind of brings more attention to again what we can get locally and how we can celebrate that."