After graduating from high school in the summer of 1944, my maternal grandfather, Kendall Churchill, walked around his hometown of Corydon, Indiana in a sailor's hat singing "Anchor's Aweigh." He knew he was going off to fight in World War II, and he was sure he was going into the navy. But when he arrived at the recruiting center, the navy had taken its number of recruits for the day. He was headed for the army instead. He became part of the 86th Infantry of the 10th Mountain Division and in December, he sailed for Italy. The 10th Mountain Division's push through Italy began in Naples, but the most serious fighting was further north, in the Apennines and the Po Valley.

Although my mother said that my grandfather never talked about the war when she was growing up, by the time I knew him, he talked about it a lot. He told funny stories, like when he was in basic training and took half a watermelon from the cafeteria line before being told the rules were "take all you want, but eat all you take." And he was honest about how scared he was, sleeping in a foxhole on the side of a mountain in the Apennines.

On Victory Day, he was in a small town in northern Italy and although I never heard him tell this story, in a memoir he wrote in the 1960s, he recalled how happy the people were and how the people in the village fed the soldiers scrambled eggs. He said he had never tasted anything so good. 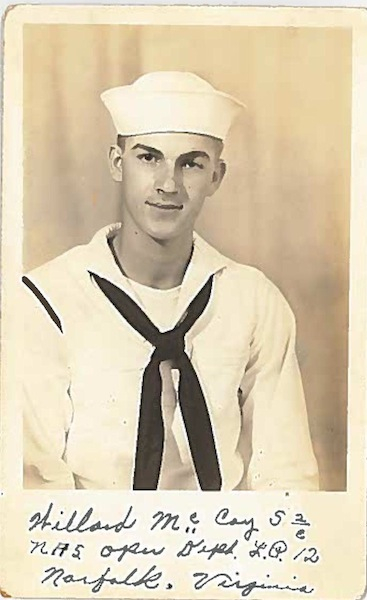 On that day in early May 1945, my paternal grandfather, Willard McCoy, was on the destroyer U.S.S. Wiseman anchored in Manila harbor, where the ship was providing electricity to the Philippines. He had joined the navy in May 1943 and was part of the first crew of the U.S.S. Wiseman, which was commissioned into the navy in April 1944. The ship escorted convoys in the Atlantic for most of 1944 and was crossing the Straits of Gibraltar on D-Day. In December 1944, the Wiseman was refitted as a floating power station and in January 1945, it sailed through the Panama Canal, headed for the Pacific.

My grandfather McCoy also didn't talk much about his war experience. He told me that the sailors would paint a picture of every ship they sank on one of the Wiseman's towers, and he was fond of telling the story of how once they fired a torpedo at what they thought was a submarine but turned out to be a whale. They painted the whale on the tower, too. He talked about selling shoes and cigarettes in the Philippines, where the Wiseman was stationed for several months. He didn't smoke, so he was able to make some pretty good deals trading the cigarettes from his ration.

In early August, the ship set sail headed for the Sea of Japan ready to take part in the final assault on Japan. While en route, the sailors learned that a big bomb had been dropped on Japan; they didn't know at the time that it was an atomic bomb. On August 15, 1945, my grandfather was sleeping on the deck of the ship when suddenly the horn started blowing and flares started going off, not only from the Wiseman, but from all the ships in the fleet. He told my father that at that moment he thought "Well, this is it. We are invading Japan." But instead, over the loudspeakers he heard: "The war is over. Japan has surrendered."

In the run-up to Victory Day on May 9, when Russia commemorates 70 years since the Allied victory over Nazi Germany, staff members at The Moscow...
opinion

In the run-up to Victory Day on May 9, when Russia commemorates 70 years since the Allied victory over Nazi Germany, staff members at The Moscow...
opinion

In the run-up to Victory Day on May 9, when Russia commemorates 70 years since the Allied victory over Nazi Germany, staff members at The Moscow Times...
opinion Andrei Pertsev