"Boys and Girls," which tracks the ups and downs of a Dublin night out, won the 2013 Fishamble New Writing Award in Ireland and was taken to New York last summer.

A short guide to some of the Irish slang you may hear if you go to see the Irish plays this week.

Unreal: amazing
Filthies: dirty looks
Bold: a little badly behaved
Culchie: someone from the country
Deadly: awesome
D4: posh area in Dublin
Eejit: massive idiot
Gas: funny
Headwreck: someone or something tiresome
Mot: girl
Yoke: ecstasy pill
Yer one: he/she
Yer man: he
Yer wan: she
To get the ride: to get lucky
Shift: kiss
To get binned/wrecked: to get drunk
Grand: OK; fine

"Boys and Girls" is a play about wordplay, stripped back to show the streams of consciousness of a group of four young people, and their range of conflicting emotions, on a night out as two get lucky and two don't. There isn't any scene change, and there aren't any costume changes. It's all in the words.

"I always feel that our show essentially deals with universal themes of youth, uncertainty and expectations," said one of the show's actors, Ronan Carey, in a Skype interview. "If they've ever been young and unsure of where they stand in the world, or can acknowledge the arrogance of youth, they will most likely find a bit of themselves in one member of the cast, even across language and cultural barriers."

"'Boys and Girls' is my attempt to show a Dublin that's familiar in a form that isn't," said director and writer Dylan Coburn Gray. "The mixture of honesty and silliness as the four characters talk in sometimes painful detail feels like a conversation with a best friend, the person with whom you can say what you think, be it sublime or ridiculous.

Actor Carey's one worry is about the language, which makes much use of Irish slang, with words like culchie, which means someone from the country.

"I think the nature of the show with its very Dublin vernacular, plus some made-up words, will make it a very hard job for the translator," he said.

Coburn Gray is more confident. "I really got on with our Russian translators in Omsk, who were my age, because we had a shared sensibility and sense of humor. Hopefully that bodes well for our debut in Moscow."

It is the first time the Irish Week festival has brought over theater shows. "Theater is so strong in Russia. When I'm bringing over indie music, I know we'll wipe the floor," said Johnny O'Reilly, festival organizer, "But I'm so interested in fringe because the level of theater in Russia is so high but they've never seen this kind of theater before. … We've selected new fresh material that hopefully will make people think."

All three plays are performed in English with Russian surtitles.

The other two plays showing are "Pondling" and "Human Child." 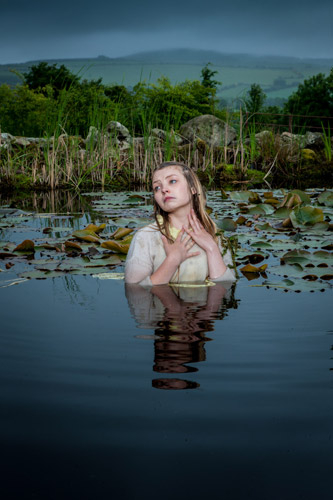 "Pondling" is about a girl who is "creepy and too weird for other people."

"Pondling," written and performed by Genevieve Hulme-Beaman, imaginatively explores the effects of a solitary life in rural Ireland. Hulme-Beaman describes the lead as "a bit mental, a bit of a baddy, she's frightening but she's an 8-year-old girl." Although she told website theprowlster.com that she was worried it would be "too creepy and too weird for other people." The play won best female performer at the Irish Fringe festival in 2013.

"Human Child," is about the need to maintain the child within. Actors morph into a variety of different characters as they lead Leila, the lead character, on her journey home, away from the 'fairies' she so often gets carried away with. Irish Theatre Magazine wrote: "We walk into the theater as adults. … We leave as the child we long left behind."