Moscow will get a huge fix of Celtic culture starting Wednesday as Irish week begins. Indie bands, famous stand-up comedians like "Father Ted's" Ardal O'Hanlon and top Irish films will be some of the highlights in the huge range of events and activities from the land of green and gold.

Irish Week started out as a small film festival and now, in its third year, has evolved into one of the biggest national culture festivals held in Russia.

"Embassies always try to push this historical and cultural link between Russia and Ireland but to be honest, the links aren't that strong and that's the reason we want to do this, because a lot of people here don't know about Irish indie music or Irish comedy so we're showcasing this to them" said Johnny O'Reilly, the festival's main organizer and co-founder.

The St. Patrick's Day parade, a Moscow tradition since the early 1990s, will also take place, but the week has many other events.

Live comedy stand-up acts are some the most popular events during the week. This year, O'Hanlon and Tommy Tiernan have been given the challenge of making the Russians roar with laughter at Irish Week's MIC Fest.

Tommy Tiernan, a veteran comedian who has appeared on the "Late Show with David Letterman" a number of times, is excited to finally make it to Russia.

"I'm intrigued by the culture. Russia's not afraid to be gloomy compared to the forced optimism of American cinema. It's such a relief to watch," Tiernan told The Moscow Times in a phone interview.

"There haven't been many jokes in the movies I've seen. There's been lots of vodka and complicated women but no jokes."'

The comedians will be speaking in English without translators, but there is little doubt that the humor will be understood by the Russian audience. 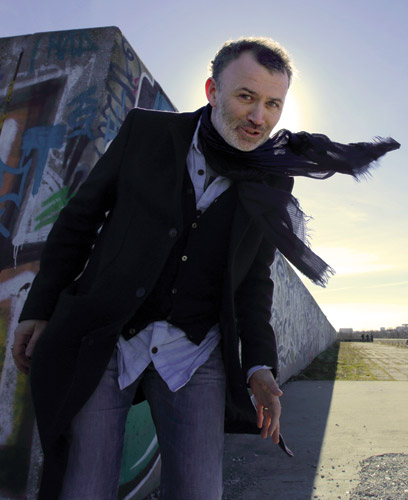 Comedian Tommy Tiernan is one of the big attractions during Irish Week.

"When we started bringing the comedians out we were a bit worried that the comedy would be a bit too vernacular, the language used might not translate well, but English-language comedy works really well in Moscow, it's probably our highest-selling event,"said O'Reilly

The Irish Film Festival is celebrating its eighth year in Moscow and has screenings of nine award-winning Irish films including the Oscar-nominated animated film "Song of the Sea," and "Jimmy's Hall," directed by Ken Loach, about a political activist who is deported from Ireland in the 1930s.

One of the more intriguing films, though, is a showing of "Rocky Road to Dublin," a documentary look at what Ireland was like in 1967 by Irish-born journalist Peter Lennon and French cinematographer Raoul Coutard, which is now hailed as a classic.

O'Reilly is most excited about the three plays that the festival will show as part of its fringe fest.

"The three plays we've selected are completely new and fresh, very new provocative themes that are not usually explored in contemporary Russian theater. And people here have such high opinions about theater I'm hoping it will provoke a lot of conversation, a lot of dialogue among the Russian audience" he said.

The New York Times described one of the plays, "Boys and Girls," a 50-minute play about Dublin nightlife, as "frivolous, lyrical and a fresh production."

"I think many of the themes of 'Boys and Girls' are universal. At its core it is about sex and love and life, and how these are negotiated on a night out … but I do worry about them keeping up with the Irish slang pace!" said cast member Maeve O'Mahony in a Skype interview.

It would hardly be an Irish Festival if there wasn't also some folk music on offer and the Bards of Bedlam, a collection of ten Irish and Russian musicians and groups, will play in Moscow as part of a Russian tour which will eventually take them on to Yakutsk and Vladivostok. The Ticket to Dublin festival features more upcoming indie, rock and rap acts more suitable for the hipsters of the Russian capital.

The traditional St. Patrick's Day Parade will process through Sokolniki Park on Saturday, so don't be dazed by the seas of green which are sure to amass on this park to the north of the city center. Over 15,000 Muscovites are expected to attend the event bearing shamrocks, flags and leprechaun-themed attire. The parade will then be followed by the gala festival Day and Night.

So whether you're a whisky lover or a Guinness guzzler or more of a James Joyce fan, be sure to get your fix of Irish culture this week.