Oil paintings and graphic art with simple subjects line the walls of Vauxhall Center at Rizhsky railway station, the fourth exhibit of an artist who has never been to her own shows and whose main fame does not come from the canvas.

Yevgenia Vasilyeva’s exhibition “Eva in Wonderland,” timed to open on Lewis Carroll’s birthday, has pieces painted by her alter ego “Eva,” showing drawings of abstract nouns such as struggle, fear and love, which are a mile away from her previous show featuring portraits of former British Prime Minister Margaret Thatcher, opposition politician Alexei Navalny and former Defense Minister Anatoly Serdyukov.

The opening last week was much the same as any other opening — the wine flowed, speeches a tad too long were made and people shuffled around to look at each of the 60 works — except for the absence of the artist, because she is under house arrest after being accused of large-scale fraud worth 3 billion rubles.

A video of Vasilyeva was shown at the opening showing her daubing paint onto a huge canvas in what was presumably her large flat in central Moscow. Tabloid papers reported that her flat had 13 rooms but Vasilyeva later denied that it was that big. Judging by the video it is still larger than your average flat. 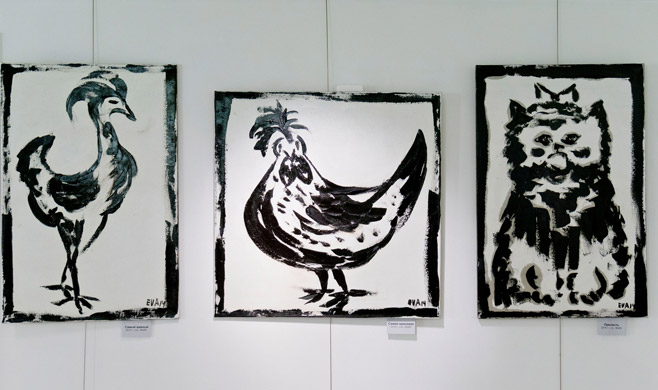 Igor Dudinsky was so impressed he called Vasilyeva "Picasso in a skirt."

Vasilyeva was arrested in 2012 at that flat in an early morning police raid, where her alleged lover Serdyukov was also reportedly present.

She is accused of selling off Defense Ministry property on the cheap for profit and is currently on trial. Serdyukov spoke up in her defense at the trial last month. He received a presidential pardon last year.

Vasilyeva said that “the charges are … unfounded, baseless and biased,” in an interview with the Vedomosti newspaper. She faces up to 12 years in jail on 12 counts of fraud, money laundering and exceeding and abusing her authority.

But back to the art. At the opening her lawyer, Hasan-Ali Borokov, was on hand on her behalf saying that Vasilyeva is “a great woman with authentic works whose art has a new style, a new direction. Whatever it is you want to see [that] is how Vasilyeva wants her work to be received.”

“Many people ask aggressive questions about the nature of her past but this is not related to her art,” said Natalya Medvedeva, owner of Dresden Gallery, which has shown Vasilyeva’s work before. “It could even be suggested her current state has improved the work she has produced. She represents a woman overcoming struggle through creative expression.”

Vasilyeva’s “creative expression” has not been limited to painting since she was placed under house arrest.

Apart from her four solo exhibitions, she has sung and appeared in a pop video, shaking her hips next to a BMW full of scantly clad back-up dancers, and published a small collection of love poetry and had a book of her paintings released .

The latest exhibition was completed in only three months, but there were only fans with a distinct lack of skepticism at the opening. 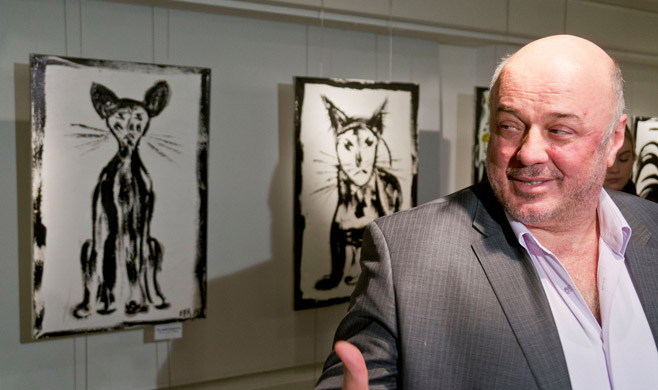 “We are simply happy she has discovered her talent in painting,” gushed one of the exhibit curators Yelena Kameneva. “There is such energy and emotion in her work and I hope this will continue. She is quickly forging a new path in life.”

Still, this new path may be cut off soon if she is found guilty and sent to prison, where she is unlikely to get ­access to an easel and palette.

The series of quickly painted works are very different from previous exhibits, which provoked some fans to bold words.

“Her energy demanded an immediate release or else her emotions threatened to tear her apart from inside,” said Nadezhda Musyankova, an art historian at the Tretyakov Gallery.

“All art is subjective really, of course people are going to look at it and say, well, I don’t think it’s art but isn’t that the same for every artist?” said Yekaterina Kuklis, director of Black Dog Gallery.