George Costakis must rank as one of the most amazing embassy workers who ever lived. His apartment on Prospekt Vernadskogo in the south of Moscow was an Aladdin's cave of avant-garde art, full of works by Kazimir Malevich, Marc Chagall, Wassily Kandinsky and many more — all bought on the salary of a humble embassy employee.

Costakis spent 35 years at the Canadian Embassy in Moscow, building up a stunning collection of 20th century art, most of which he eventually donated to the State Tretyakov Gallery when he left the Soviet Union in 1977.

In honor of the centenary of his birth, the Tretyakov Gallery now has an exhibit "Georgy Costakis. Departure from the USSR…" devoted to Costakis and his glorious collecting spree.

Costakis was born in Moscow, where he lived for the first 64 years of his life. With Greek parents, he was that rarity in the Soviet Union, a local "foreigner." His Greek citizenship gave him "more freedom" said Irina Lebedeva, head of the Tretyakov Gallery.

When Socialist Realism became the only officially approved art in 1934 under Josef Stalin, avant-garde art became anathema and often dangerous for artists and for art lovers.

But as a foreigner, Costakis was able to purchase works from some of the Soviet Union's most talented artists or from their relatives — and for very affordable prices. Costakis bought some artworks for around $100 — works that today would costs millions of dollars.

Costakis had long been a collector, but initially focused on Russian silver, porcelain and 16th and 17th century Dutch paintings while working at the Greek Embassy. His obsession with modernist art only began in 1946 when he bought a painting by abstract artist Olga Rozanova.

"I brought it home to my flat, with the silver, the carpets and so forth, and I realized that I had lived until then with closed windows,'' he said in an interview, the New York Times wrote in their obituary for Costakis in 1990.

Costakis then scoured the country for modernist masterpieces, tracking down famous artists like Alexander Rodchenko and Varvara Stepanova, who had fallen out of state favor. 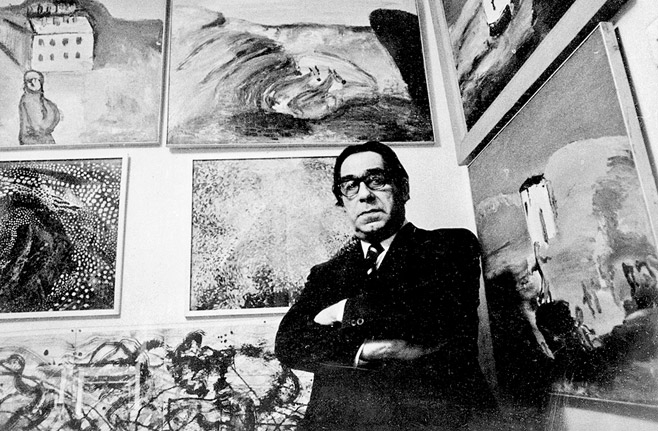 Costakis in his apartment, where he kept his collection of avant-garde art.

"It's clear there was a kind of goal: to create an avant-garde panorama," said Lebedeva, "Every time period has its own personality. If [Pavel] Tretyakov, [founder of the gallery] was famous in the 19th century, then Costakis was in the 20th century."

Costakis was able to afford the art he bought because of an unusual agreement he made with the Canadian government: He was paid not as local staff, but as a Canadian, with a bank account in Ottawa. Costakis also benefitted financially from buying his Canadian colleagues' extra rubles, which were purchased at a rate subsidized by the Canadian government, Peter Roberts wrote in his book "George Costakis: A Russian Life in Art."

Costakis' work with foreigners also gave him the chance to make valuable connections. In the 1950s a French diplomat, who was a friend of Marc Chagall's, told the artist that Costakis might be interested in collecting his work. Pleased and flattered, Chagall, who had already emigrated to Paris, began a multi-year correspondence with Costakis.

Eventually, Costakis purchased a number of Chagall's paintings. Costakis' daughter Aliki recalled that her father once bought a portrait of Chagall's wife, "A Portrait of Bella," for 8,000 rubles —an extraordinarily small sum.

"Costakis has a good eye … he knows all my work. He is really an amazing man," Aliki recalls Chagall saying to his second wife Valentina in the Tretyakov Gallery's accompanying book to the exhibit.

Costakis' collecting became an obsession and his flat in Moscow was packed with thousands and thousands of pieces of art.

"Some people think collecting is a kind of hobby. But it's a kind of sickness," Costakis said in archival footage from the wonderfully titled 1996 Greek documentary "When Chagall was Worth Less Than a Pound of Potatoes."

In 1962, the Costakis family moved from central Moscow to Prospekt Vernadskogo, where Costakis combined three apartments into one and his home became an increasingly popular venue for contemporary art shows.

The Tretyakov exhibition begins with family photos of Costakis' apartment and the friends he hosted there — diplomats, musicians, curators, and artists.

The show then moves through the art he collected from early avant-garde from the 1910s onto cubism, constructivism, suprematism, and experimental art. The exhibition ends with Costakis' own paintings.

Costakis and his family were granted permission in 1977 to leave the Soviet Union for Greece. To leave, he had to donate the majority of his collection to the State Tretyakov Gallery and was only allowed to take about 1,200 artworks out of the country.

"The life of a person is short," his daughter Natalia recalled him saying. "There will be another ten, maybe twenty years and I won't be here, and after I'm gone I will want something to remain—at the very least a good name."