Bouquets of roses and brightly colored gerberas, interspersed with candles and dozens of "Je suis Charlie" signs, protrude from under a layer of snow by the railings of the French Embassy in Moscow.

"I came to the embassy on Thursday, the day following the attack [on Charlie Hebdo satirical weekly in Paris that left 12 dead]," France's ambassador to Russia, Jean-Maurice Ripert, told The Moscow Times.

"I immediately noticed that dozens of people had gathered in front of the embassy to lay flowers, candles and leave messages. We were very touched by this, but not surprised. Russia, just like France, has been a victim of terrorism for many years now. We know that we have this common enemy."

The tragedy that darkened the City of Light is a reminder that Russia and the West, which continue to feud over the conflict in Ukraine, may have more in common than it seems. Yet tensions over Russia's annexation of Crimea, the ongoing conflict in Ukraine and the mutual imposition of sanctions have come to overshadow extensive cooperation between France and Russia.

Russian Foreign Minister Sergei Lavrov attended a 1.5 million-person solidarity march in Paris on Sunday, along with representatives from 83 foreign states, to honor the victims of last week's vicious attacks at Charlie Hebdo and a kosher supermarket in the French capital. Critics questioned Lavrov's presence at the march, complaining that foreign delegates from states with poor human rights and press freedom track records had no place at the event. Russia ranked 148th out of 180 countries in Reporters Without Borders' 2014 World Press Freedom Index.

But French Ambassador Ripert, who has headed the European Union's delegation to Turkey and also served as ambassador to Greece prior to taking up his post in Moscow in October 2013, dismissed the notion that certain foreign leaders and ministers were more welcome than others at one of his country's largest demonstrations.

"The fight against terrorism is international. It's a war. This is the word that French President Francois Hollande has used," Ripert said. "It's important for us that all countries are united against terror. The march demonstrated the willingness to reaffirm the importance France gives to its model of the co-existence of cultures, republican integration and positive laicity as the acceptance of all forms of religious expression. In this context, there was a place for all countries at the march. It expressed a willingness to be fraternal, to stand tall against terrorism."

As Ripert sat in his elegant office on Monday evening, an official portrait of Hollande hanging above his head, the foreign ministers of Russia, France, Ukraine and Germany were holding talks in Berlin aimed at resolving the crisis in Ukraine. The ministers postponed plans to hold a heads of state summit in Kazakhstan later this week because of repeated violations of the cease-fire agreement in Ukraine.

Ripert argues that the major impediment to peace is the failure of Ukrainian authorities and separatist leaders to agree on a cease-fire line.

"The [peace] process is blocked because of a few kilometers along the cease-fire line," he said. "[Ukrainian] President [Petro] Poroshenko, Prime Minister [Arseniy] Yatsenyuk and the separatist leaders must talk — and agree. Heads of state will not meet to discuss the cease-fire line. This has to be done by the different sides in Ukraine."

The ongoing clashes in Ukraine have been at the heart of high-level international diplomatic exchanges, including between Russia and France.

Between January and July 2014, Putin and Hollande discussed a range of issues in 14 official phone calls, Russian media reported. The only foreign leader with whom Putin communicates more frequently is German Chancellor Angela Merkel.

Hollande also did something no other Western leader has done since the outbreak of the Ukrainian crisis: pay a visit to Putin, on Putin's territory. On his way back from Kazakhstan in early December, Hollande's plane stopped at Moscow's Vnukovo Airport, where he met with Putin.

Ripert attended the meeting, which he said lasted for two hours instead of the scheduled one-hour time slot. The ambassador said the tone of the encounter was both "warm and extremely serious."

"During this talk, they [Hollande and Putin] did not simply repeat their positions," Ripert said. "They were really working to find a solution to the crisis in Ukraine."

Hollande's visit, although it came as a surprise to observers, had been discussed with the two other leaders involved in the "Normandy format" talks on Ukraine — Germany's Merkel and Ukraine's Poroshenko — according to Ripert. The French ambassador dismissed theories that Hollande's visit to Moscow was a political maneuver to present France as a leading country in the resolution of the crisis in Ukraine.

"Things are much more simple," he said.

Hollande's tarmac diplomacy, he said, was just another element of the Normandy format talks, which date back to June, when the heads of France, Russia, Ukraine and Germany met in the French coastal region to mark the 70th anniversary of the allied landing in France. 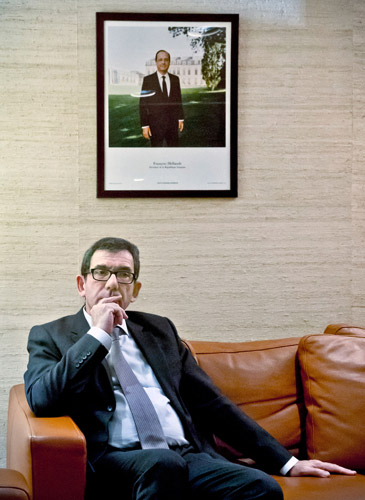 The ambassador has witnessed major changes during his time in Russia.

Vnukovo Airport, the location for Hollande and Putin's impromptu encounter, is also where Christophe de Margerie, the CEO of French energy giant Total, was killed in October when his private jet caught fire after colliding with a snowplow. De Margerie, whom Ripert described as a "personal friend," was a strong advocate for business interests to prevail over politics in his country's relations with Russia, and had lobbied the highest echelons of the French and Russian governments to that effect.

"He [De Margerie] had his positions, of course," Ripert said. "He spoke to the head of state in France and to President Putin here. He did a lot to develop French-Russian relations. But enterprises remain enterprises. The elected authorities of democracies are those who are in charge."

Ripert said that De Margerie's tragic death — along with that of three French crew members on board his private plane — has not affected French-Russian relations. The incident nonetheless adds to the long list of instances in which France and Russia have made the headlines for controversial reasons.

Another bone of contention in France's relations with Russia is Hollande's decision to indefinitely suspend the delivery of the first of two Mistral helicopter carriers to Russia on account of the situation in Ukraine. The 1.2 billion euro contract for the construction of two Mistrals for Russia was signed in 2011, when former presidents Nicolas Sarkozy and Dmitry Medvedev were in power. The first of the vessels, the Vladivostok, was to be handed to Russia in 2014.

"President Hollande has explained this very clearly," Ripert said. "He said that current conditions [in Ukraine] do not allow him to permit the ship's delivery to Russia. We will see when the time comes. Of course there needs to be progress toward peace in Ukraine. I think Russia has understood the message."

But it seems that Hollande's position is not in fact clear to the Russian government. Russia's Federal Service for Military and Technical Cooperation sent an official request to France's Defense Ministry asking for an explanation for the ship's non-delivery, RIA Novosti reported Tuesday. An unnamed Russian official quoted by the state news agency said that Russia required an official response from France in order to take further action: either to "appeal to a court or give the French side more time."

The progress in Ukraine that Ripert and Hollande talk of refers to the Minsk Protocol, whose requirements include adherence to the currently tattered cease-fire, the release of hostages and illegally detained individuals, the withdrawal of military equipment, humanitarian access to the war-ravaged Donbass region, and a national dialogue that will guarantee the rights of minorities, including Russian-speakers.

Like his president, who told France Inter radio station earlier this month that Western sanctions on Russia should be lifted if progress was made in talks on Ukraine, Ripert is an advocate for lifting some sanctions against his host nation. But other sanctions, he said, will likely endure even when the situation in Ukraine normalizes.

"Europe and France will never recognize the annexation of Crimea, which we consider illegal," he said. "In any event, certain sanctions will remain in place because of the situation in Crimea."

Although 2014 has arguably been one of the most trying years for French-Russian relations of the post-Soviet era, Ripert confidently enumerates the instances in which the divisive demarcation between East and West faded for France and Russia in the past year.

"Ukraine may dominate the headlines, but we have also worked with Russia, as our European partners and other countries have, on current issues of the day," he said. "These include nuclear proliferation, turmoil in Iraq, the crisis in Syria, the fight against terrorism and the fight against climate change. Russia supported France, within the framework of the UN, in Mali and in the Central African Republic. We are now working together to fight the Ebola virus, notably in Guinea, a country where France and Russia have a strong influence."

Ripert has witnessed colossal changes during his 15 months as France's representative in Russia. He arrived on the eve of the street protests in Kiev, the prelude to today's crisis. He was a powerless observer of Russia's annexation of Crimea and the deadly clashes in Ukraine. He saw at first hand the souring of the long-standing cordial ties between France and Russia, and the disappearance of French cheeses from Russian grocery stores under an import ban.

He also lost a friend.

But amid the turmoil, Ripert remains calm on the surface.

"The French and Russians have many things in common," he said, smiling. "We have natural empathy. We are impulsive, emotional. We like to talk, drink, eat, laugh. For a French ambassador, it's great to be in Russia. It's fascinating. But it is also difficult in times like these."

In Russia, Tears and Jeers After Charlie Hebdo Massacre

A mixture of genuine grief, petty political pandering and condemnation of a vaguely defined notion of blasphemy have dominated a broad array of Russian...
Wargames

Putin has made Russia's Arctic region a strategic priority and ordered massive investment in military infrastructure and mineral extraction.