A mixture of genuine grief, petty political pandering and condemnation of a vaguely defined notion of blasphemy have dominated a broad array of Russian reactions to the massacre at French satirical weekly Charlie Hebdo that left 12 dead.

As much of the world commiserates with France in the aftermath of the Wednesday attack, the Russian population and state officials — who tend to adopt a conservative interpretation of words and actions that constitute blasphemy and religious offense — made clear the fact that the country has not reached a consensus with the West about what can be said, written or drawn without consequence.

Konstantin Dolgov, the Foreign Ministry's commissioner for human rights, democracy and the rule of law:
"We strongly condemn the barbaric attack of extremists on the staff of the Charlie Hebdo weekly in Paris."

Natalya Poklonskaya, prosecutor general of Crimea:
"After what happened, how can one be surprised at the behavior of some European politicians? Europe has long been a red-light district, not a place of honor."

Vladimir Pozner, renowned journalist:
"My sincere condolences to the families and friends of those killed in Paris at the hands of terrorists. There are no excuses or forgiveness for murderers."

Armen Gasparyan, journalist and author:
"Poroshenko is still such an idiot. When expressing condolences to the French Embassy, he wrote 'Charie' instead of 'Charlie' [in the book of condolences]."

Russian Foreign Minister Sergei Lavrov was among the dozens of international delegates and heads of state to take part in Paris' solidarity march in honor of the victims on Sunday, the turnout of which Agence France-Presse estimated at about 1.5 million. Lavrov, like President Vladimir Putin, swiftly offered his condolences to France following the attack. Dozens of Muscovites also laid flowers and paid their respects at the French Embassy last week. A group of French expatriates marched through Moscow's Gorky Park on Sunday, where they honored a moment of silence, according to French newspaper Le Monde.

Yet no high-ranking Russian officials have spoken out about the imperative of protecting freedom of expression, a leitmotiv of Western observers' commentary on the attack. Notably, Russia ranked 148th out of 180 countries in Reporters Without Borders' World Press Freedom Index in 2014.

Alexei Pushkov, head of the State Duma's Foreign Affairs Committee, notorious for his anti-Western tirades, was among those who used the attack on Charlie Hebdo to absolve Russia over the ongoing crisis in its relations with the West and finger-point terrorism, a common threat to feuding powers.

"The tragedy in Paris shows that Russia does not threaten Europe and its security," Pushkov tweeted in Russian last week, adding that "agents of terror" were in fact genuine threats to European security. Pushkov later tweeted in French that both Russia and France were fighting the same sources of terrorism and that their common battle was "another reason to cooperate and not be in conflict."

But uncouth speculations about the forces behind the attack and calls to restrict media reports potentially offensive to religious believers have tainted Russia's sympathies.

LifeNews, a sensationalist news channel known for its alleged ties to Russia's security services, broadcasted segments Thursday suggesting that U.S. intelligence could have been behind the attack on Charlie Hebdo.

A political analyst named Alexei Martynov, head of an obscure Moscow think tank, offered LifeNews an elaborate explanation for the cause of the massacre, insisting that the U.S. could have orchestrated the attack to dissuade France from easing sanctions against Russia. 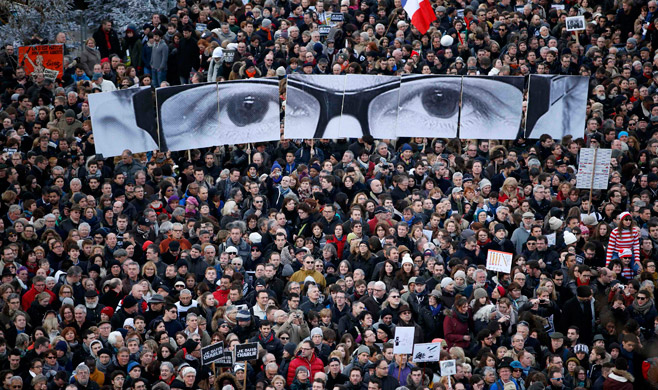 Hundreds of thousands of French citizens taking part in the solidarity march in the streets of Paris on Sunday.

"I want to note that in the past years and decades, so-called Islamic terrorism has been in the hands of one of the world's leading intelligence agencies, that of the United States," Martynov said.

In stark contrast, official Russia and increasingly popular conservative social movements seem to have little patience for those who offend the views of religious believers, regardless of whether the offense was intentional. This situation imposes certain restrictions, including self-censorship, on Russia media, including the country's few remaining liberal publications.

"Media outlets like [the liberal-leaning] Dozhd and Ekho Moskvy are much more careful [than in French media outlets] when it comes to material that could be insulting to religious believers," said Igor Bunin, head of the Moscow-based Center for Political Technologies think tank. "It's not that they are afraid. It's just that they don't feel the need to broadcast material that would be insulting to believers."

Yet for Chechen leader Ramzan Kadyrov, who has been making statements with increasing frequency that appear to go beyond his mandate as a regional leader, Ekho Moskvy has not been careful enough. Kadyrov berated the radio station's editor-in-chief, Alexei Venediktov, for polling listeners about whether publications should publish cartoons depicting Muhammed in response to the attack.

"The question itself is provocative," Kadyrov on Friday wrote via Instagram, his preferred method of disseminating mass information. "It is an attempt to offend Muslims in Russia and around the world, to spark enmity between peoples, to sow chaos and disorder."

Kadyrov added that if authorities fail to hold Venediktov accountable, "people will take him to task." Venediktov later said Kadyrov's statement constituted a direct threat. The Chechen leader also referred to former oil tycoon Mikhail Khodorkovsky as a "personal enemy" and "enemy to all the Muslims of the world," after the long-time Kremlin critic called on international publications to follow in Charlie Hebdo's footsteps and publish satirical cartoons of Prophet Muhammad in solidarity, TASS reported.

Meanwhile, not everyone who turned up to the French Embassy in Moscow did so to express support for the fallen cartoonists. A handful of Russian Orthodox activists also rallied in front of the embassy last Thursday, accusing the victims of the Charlie Hebdo massacre of having brought their tragic fate upon themselves by insulting religious views. Russia's Council of Muftis condemned the attack but suggested the massacre had been prompted by the publication's "sin of provocation."

"Like for Pussy Riot [three members of which were jailed after having performed a 'punk prayer' in Moscow's Christ the Savior Church in 2012], support for actions that were deemed blasphemous by a large portion of the population only came from Europeanized Moscow," Bunin said. "The rest of the country tends to find these kinds of actions offensive."

Law enforcement officers in Moscow have likewise shown little patience for even modest manifestations of popular support for the victims of the Charlie Hebdo massacre. Two lone demonstrators were detained on the capital's Manezh Square on Saturday — the locale for recent opposition protests — as they were holding "Je suis Charlie" signs, according to OVD-Info, an independent human rights media project focusing on protest activity in Russia. The demonstrators have since been released.

Russian President Vladimir Putin has expressed his condolences to those affected by an attack on the offices of French magazine Charlie Hebdo on Wednesday...
news

Russian Orthodox activists rallied outside the French Embassy in Moscow with signs blaming this week's massacre at the offices of Charlie Hebdo on the...
stream of letters