In the outskirts of Donetsk, close to the airport, where fierce fighting between Ukrainian forces and Russia-backed rebels has been ongoing for months, shelling has become a part of everyday life. Local residents refer to rolls of industrial plastic wrap as "glass panes" — having once replaced the glass in shattered windows only to see it destroyed in the next blast, they now resort to pulling plastic over the windows to keep them sealed "till better times."

Plastic wrap is even more in demand in the Luhansk region, where the damage to infrastructure in rebel-controlled territories is even more severe. When I visited the town of Pervomaisk a few weeks ago, the first question the self-proclaimed town administrator asked my colleagues and me was, "Have you brought any plastic wrap?" Apparently, they had mistaken us for long-awaited aid workers.

The scope of the disaster was shocking even to our experienced eyes. When a journalist headed in the same direction a few days later, I suggested that he bring some food or a few rolls of plastic wrap. Not because it was his job, but because he would feel awful arriving empty-handed. 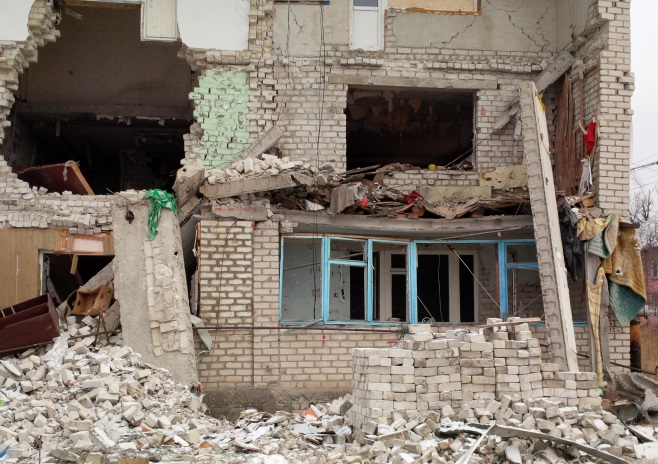 The level of damage to housing in Pervomaisk is staggering.

Pervomaisk, 50 kilometers west of Luhansk, used to be a vibrant and densely populated town, with close to 39,000 residents, several industrial plants, over a dozen schools and a few colleges. Rebels took over the town this past spring and resolved not to relinquish it to Ukrainian forces, despite intense, deadly shelling that continued from late July through the end of August. Most residents fled early on, but some stayed behind, seeking safety in basements. Many died when they ventured outside for food or water — how many, no one knows for sure. People buried family members in their yards for lack of other options.

When things quieted down in September, the level of destruction was so staggering it reminded me of the Chechen capital of Grozny in 2000, the most iconic image of post-Soviet war wreckage of the 21st century. Some neighborhoods were razed completely; others were barely inhabitable. Nevertheless, with the Minsk accords signed by Ukraine, Russia and the separatists on Sept. 5 supposedly ending the fighting, residents, including families with children, began trickling back in. Having spent a couple of months in other parts of Ukraine or in Russia, they had exhausted their financial resources and did not want to be a burden to relatives and friends. Then in November shelling resumed, and it hasn't stopped since.

Ukrainian forces are stationed just a few kilometers from Pervomaisk. Rebels fire on them from their numerous positions inside the town, next to schools and hospitals and in between apartment buildings, putting civilians at great risk. Ukrainian forces return fire, using even notoriously indiscriminate Grad multiple rocket launchers and paying no heed to civilians' safety. As both sides engaged in the war fail to respect their obligation to minimize civilian harm, at least 10,000 civilians in the devastated town take the brunt of the fighting. Several residents of a wrecked nine-story building told us how the building was shelled in late November, and how when a repairman tried to fix the electricity in the parts of the building still standing the next morning, he was killed in a new wave of shelling.

Medics at the local maternity hospital told us that on Nov. 15 the hospital was stuck by a mortar shell and five more shells landed in its courtyard. Shell fragments flew into the neonatal intensive care unit, where a premature baby girl was hooked to an artificial lung. The nurses said the baby's incubator was showered with shreds of glass and the child "survived only by a miracle."

People whose homes have been left without water, gas or electricity from the shelling now live in underground shelters. I interviewed a family with four small kids — the youngest just two years old — in one of those cold, damp basements. They've been living there for three months now.

The luckier residents have either electricity or gas, so they can keep their quarters just barely warm and livable. The elderly, however, cannot manage to go for water — just try lifting two buckets full of water from the tap in the yard to the ninth floor with the elevator not working — and so they depend entirely on the kindness of younger relatives or neighbors. A woman who works in a mercifully undamaged boiler house told us that, though unpaid, she keeps working for two things — the chance to wash in warm water and the free meals the rebel leadership provides to workers. 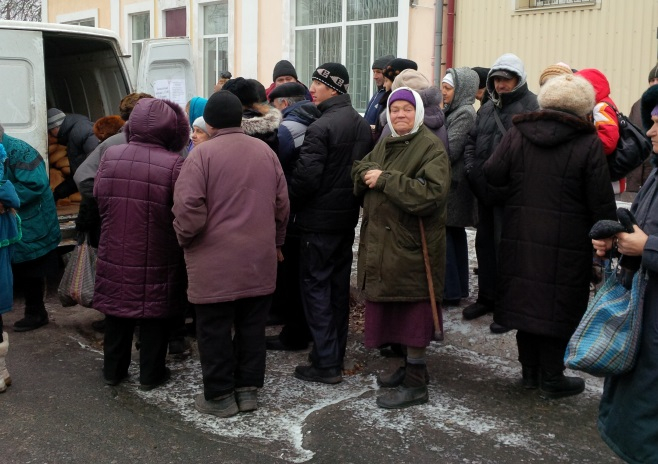 People line up for free bread in Pervomaisk.

Many local residents might have starved if not for the bread distributed in the streets by the Cossack armed forces in control of the town, whose own food supplies also appear to be dwindling. Although viciously anti-Ukrainian, the Cossacks do not see eye to eye with the insurgent authorities in Luhansk, and the latter apparently don't find it necessary to share the humanitarian cargo they receive from Russia.

Pervomaisk is not the only town in eastern Ukraine entirely wrecked by the war. Khryaschuvate and Novosvitlivka, just 2 and 7 kilometers southeast of Luhansk, respectively, have suffered just as much devastation. Whereas the destruction in Pervomaisk was mainly caused by Ukrainian government shelling, Khryaschuvate and Novosvitlivka suffered most of their damage from intense rebel shelling between Aug. 13 and 27, when the rebel forces were regaining control over these villages. Just like in Pervomaisk, numerous civilians lost their lives in artillery attacks, schools and medical care facilities were severely damaged, and much civilian housing was destroyed beyond repair. No matter which side carries out the actual shelling, civilians appear to suffer the most.

As the armed conflict continues, Russia and the Russia-backed rebels accuse Ukraine of not abiding by the Minsk accords and of a range of human rights abuses while Ukraine accuses its adversaries of the same. But mutual accusations and attributions will not relieve the suffering of civilians. All forces in this conflict need to meet their obligations to minimize harm to civilians and to ensure that the people of eastern Ukraine get the humanitarian assistance they desperately need.

Do Russians support the war in Ukraine? This question has been discussed intensely since the invasion in February. According to surveys from major Russian...
opinion Konstantin Skorkin

Ukraine’s successful counteroffensive in the Kharkiv and Kherson regions means that a large chunk of the country’s Russian-speaking southeast...