Both statements are true. Which one suits your purposes at any given moment depends on what you are talking about.

If you have in mind Teatr.doc's famous basement location on Tryokhprudny Pereulok the word is definitely goodbye, be gone, skedaddle. The small, independent theater lost its appeal of a decision by the Moscow Property Department to end a 12-year rental agreement. It will play out its December schedule, concluding on the 28th, and then Teatr.doc, as we know it, will no longer exist.

Aye, but there's the rub, as Shakespeare surely would have said. For the end of Teatr.doc as we know it only means that Teatr.doc is now prepared to be reborn as we have never imagined it.

Doc, as Muscovites call the theater, already has 12 new shows scheduled to open in the near future. In case you were speed-reading and you missed that, let me repeat: While still in search of a new home, Doc has begun development of 12 new productions that will redefine the 12-year-old playhouse in new circumstances.

The first of the new entries will be "In Search of Holy Gifts," a play being written by Doc co-founder Yelena Gremina at this very moment. According to the playwright, the piece will tell the story of the Russian Old Believers, who, in the middle of the 17th century, found their mode of faith outlawed by reformers in the Russian Orthodox Church. 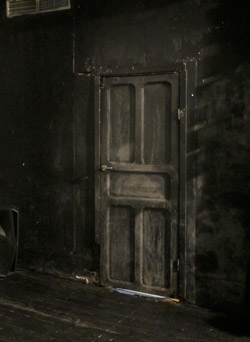 The theater will reopen on Feb. 14.

"For 10 years," Gremina told me in a phone conversation, "the Old Believers wandered throughout Orthodox enclaves in Europe looking for a home. No one would give them shelter because everyone feared Moscow."

That sounds curiously like Doc's own experience of late.

After receiving the eviction notice some two months ago, Doc made several attempts to find a new space that it could afford and that would suit its purposes.

"Four times we thought we had found a new home," Gremina said, "but each time something happened and these places fell by the wayside. Some people have even said there was no coincidence in that. I prefer to believe it was just the chaos theory at work."

At present it looks increasingly like Doc will reopen on Feb. 14 in a small detached building at 3 Baumanskaya Ulitsa.

"We can't say for sure this will be the place, but we are in negotiations," Gremina confirmed.

To defray the costs of renovations that will be necessary no matter where Doc moves to, the theater Monday opened a crowd funding account on Planeta.ru. Despite the financial perturbations of the week, the theater raised almost 40 percent of its target figure in just the first few days.

There was never any shortage of people and organizations willing to lend the temporarily homeless theater a hand. Gremina, who is officially the theater's managing director while husband Mikhail Ugarov holds down the position of artistic director, has had offers to set up shop in various cities all over Russia and even from some foreign countries.

"I wrote on Facebook that we were looking for a new space, and I got calls from all kinds of people, including spectators, strangers, a realtor and various galleries and theaters," Gremina explains.

One such call came from the YuVS art gallery on Ulitsa Pokrovka, which informed Gremina that she and Teatr.doc would be welcome to perform among the gallery's exhibits. As such, from Jan. 31 to Feb. 3, at 8 p.m. each night, Doc plans to premiere its production of "In Search of Holy Gifts."

In fact, Gremina is calling January Doc's "wandering about Moscow month." They expect to perform in various venues, including the Meyerhold and Gogol centers and clubs Masterskaya and Dom 12. Most of these performances will be drawn from the theater's existing repertoire. But don't be surprised if, aside from "In Search of Holy Gifts," a couple of new titles show up as well.

Some of the more intriguing new shows include pieces about: actors who have quit the theater and are now making a living in other spheres; a version of Plato's "The Feast," rehearsed with homeless people; the realities and aftermath of the notorious protest on Bolotnaya Square on May 6, 2012; the myths and legends that have grown up around some of Russia's most prominent provincial cities.

For those who have never experienced a performance in Teatr.doc's famous basement there are 11 glorious days left to catch such influential shows as "BerlusPutin," "Light My Fire," "The Soldier," "Akyn Opera 2" and more. Don't pass up the chance.

But then, with the New Year, it's on to bigger and brighter horizons. Nobody here really thought Teatr.doc was going to roll over and die, did they?