Summer before last, the Bolshoi Theater presented the enormously popular ballet "Onegin," created nearly half a century ago for the Stuttgart Ballet by South African choreographer John Cranko.

Last March, Neumeier's almost equally renowned "The Lady of the Camellias" came to the Bolshoi and proved a resounding success.

Among those assuming the principal role of Tatiana at the Bolshoi's initial performances of "Onegin" was Vishneva, who not long before had also danced in the Bolshoi premiere of Swedish choreographer Mats Ek's stunning one-act ballet "Apartment." November a year ago and again last month found Vishneva both producing and dancing in a week-long festival of contemporary ballet called "Context." And last March, she was seen again at the Bolshoi in an evening of dance, titled "On the Edge," performing in works especially created for her by Frenchman Jean-Christophe Maillot and American Carolyn Carlson.

Early last month "Eugene Onegin," Neumeier and Vishneva came together at the Stanislavsky and Nemirovich-Danchenko Musical Theater in Neumeier's brand-new ballet "Tatiana" (to use his preferred transliteration of the name), co-produced by the Stanislavsky and by the choreographer's own Hamburg Ballet, where it made its initial debut last June.

Vishneva returns to the Stanislavsky on Monday to again take on the title role in "Tatiana." And whatever reservations I and many others have about the ballet itself, Vishneva's performance is one not to be missed.

I came away from "Tatiana" thoroughly puzzled by what I had seen and in the hope of attending another performance, with the second of its two casts, before attempting to come to any serious conclusions. Unfortunately, an obligation elsewhere prevented that from happening. So the best I can do for now is offer a few rather general impressions of what took place on stage.

"Tatiana" is certainly a far cry from Cranko's "Onegin." Cranko's version pretty much tells the story as related in Pyotr Tchaikovsky's ever-popular opera "Eugene Onegin," places it in its original early 19th-century setting and accompanies it with music by Tchaikovsky (though not that of the opera).

As its title makes clear, "Tatiana" centers on the heroine of Pushkin's novel and attempts to delve deeply into her thoughts and character. Onegin himself plays a major, but nevertheless what seems a subsidiary role. Neumeier brings the action forward in time by a century and more, with scenes that appear to take place from the days of World War I up to the mid-1940s. For his score, the choreographer called upon Russian-born American composer Lera Auerbach, with whom he previously collaborated in "The Little Mermaid," one of his most enchanting creations and a part of the Stanislavsky's repertoire over several recent seasons. 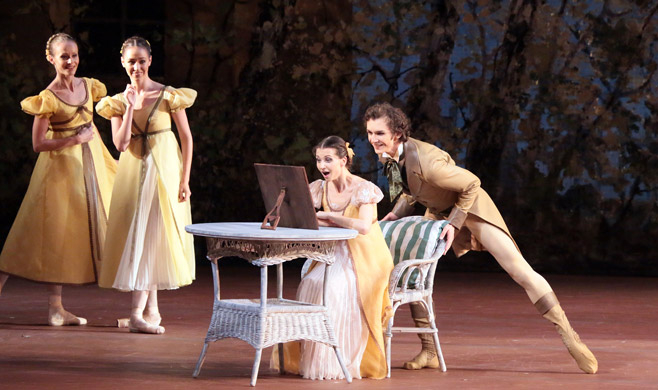 Prior to the premiere, Neumeier made it quite clear in interviews that his ballet was based on a very personal reading of Pushkin's novel. And from what I heard of comments at the premiere, that reading certainly ruffled the feathers of many in the audience. For my own part, I need at least a second look at "Tatiana" if I am ever to begin sorting out the many threads of Neumeier's interpretation.

There is much to admire in Neumeier's choreographic invention, though very little of the tender, impassioned dance such as that found, for example, in the duets that lie at the heart of "The Lady of the Camellias." Indeed, "Tatiana" has about it a rather savage and rough-hewn quality.

Auerbach's score struck me as the ballet's least successful element. Though drawing heavily on the musical styles and sounds of Dmitry Shostakovich and Alfred Schnittke, it never seemed particularly appropriate to the story and much of it could best be described as downright ugly.

Whatever one may think about the Neumeier's vision of the work or Auerbach's music, Vishneva and the members of the Stanislavsky's own troupe who appeared at the premiere danced it to the hilt. The title role must almost certainly rank among the most challenging the ballerina has ever undertaken, requiring enormous stamina and a range of complicated, athletic movement far removed from the standard classical dance vocabulary. But never for a moment did she falter. Simply stated, her Tatiana was one of the most outstanding examples of virtuoso dancing that I have ever had the privilege to see.

"Tatiana" requires an exceptionally large cast. And on opening night at least, the Stanislavsky managed to fill it with an exceptionally strong group of soloists. Certainly deserving special praise were the Onegin of Dmitry Sobolevsky, the Lensky of Alexei Babayev, the Olga of Olga Sizykh and the Prince N. (Tatiana's eventual husband) of Alexei Lyubimov.