This article was taken from the Moscow Times archive and was first published on Aug. 13, 2003.

Less than a month after the last guests left, the vast hulk of the Moskva hotel at the end of Tverskaya Ulitsa is being stripped bare in what could be the biggest junk giveaway in the city's history.

Carpets, sofas, chandeliers, vases and even the hotel aquarium are up for grabs as the city, which owns the hotel, prepares to tear down the Stalin-era landmark.

The massive restaurant on the second floor, with its magnificent 8-meter-high malachite pillars, now stands empty like a haunted ballroom, with clocks at each end permanently stuck at 10 past 10. The parquet floor is almost intact except for a small hole where work has begun. Someone wants the floor as well.

For weeks the hotel on 7 Okhotny Ryad has been taking inventory, counting how many sheets, pillowcases, chairs, grand pianos and marble staircases are on the 24,000-square-meter property. At last count, hotel officials had tallied up 15 grand pianos, 10 ordinary pianos and two marble staircases. On the walls are 250 paintings, 108 of which are from the renowned art collection at the Tretyakov Gallery.

Letter after letter has poured in from ordinary people, churches, monasteries, charities and -- most of all -- from government agencies such as the Moscow police, the Emergency Situations Ministry and the Labor Ministry asking for a share of the Moskva's spoils.

"Some write in detail, some in general," said Boris Yevseyev, the deputy director of the hotel.

A children's home in the city of Kimovsk in the Tula region has made a modest request for sheets, plates, furniture, a television and a typewriter. The Labor Ministry has sent in a two-page list of items that suggests ministry officials have never stayed at the Moskva. Apart from notebook computers and Xerox machines, the ministry asks for color televisions and potted flowers.

"They've confused us with a warehouse, not a hotel," Yevseyev said.

The hotel even got a letter from a man who said he was a sick war veteran in need of a bed and a billiards table.

"Why he needs a billiard table as an invalid, I don't know," Yevseyev said.

A commission of Moscow city officials started deciding Tuesday who will get what from the hotel.

"All of the [charitable] organizations and orphanages will get something. Maybe not everything they asked for, but something," Yevseyev said. 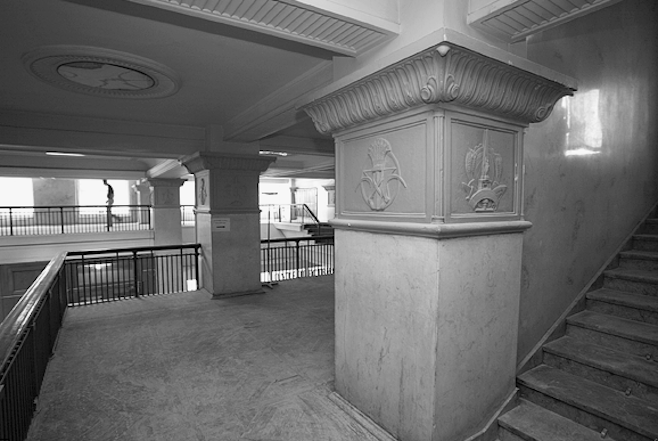 The hotel's elite status in Soviet times made it a regular spot for Party conferences.

Yevseyev has an office on the second floor with a view onto Okhotny Ryad. Above his head hangs an 18th-century Italian painting and various pieces of decorative plaster from the 15th-floor restaurant veranda that once looked over Manezh Square.

That painting will eventually go to the Shchusev Architecture Museum, located a few hundred meters from the hotel on Ulitsa Vozdvizhenka, for an exhibition opening Aug. 20 of some of the hotel's best paintings.

The museum has a special interest in the hotel as Shchusev was one of the architects behind the Moskva's interior and facade. It is especially interested in hotel furniture designed by Shchusev in the 1930s and placed in the hotel when it was built, museum official Diana Zhdanova said. The hotel's elite status in Soviet times meant it was a regular choice for Party conferences, and the original furnishings were later ditched for a newer style.

The museum also hopes to get the wooden ceiling from the banquet hall, parts of some of the stairs and some of the glorious Soviet mosaics and chandeliers. The two grand staircases, which are said to have been built with marble from the original Christ the Savior Cathedral, which Stalin destroyed, will be removed and later installed in a replica of the Moskva hotel built on the same site.

Items from the small hotel museum, including plans and photographs, will go on display in a Shchusev museum exhibit titled "Impossible to Destroy Moskva."

The hotel had fallen into disrepair in recent years, and the city, despite much opposition and the fact that the building is a registered landmark, decided to tear it down and rebuild it rather than try to repair it.

"Only people who don't care about the history of their own people can destroy the Moskva for purely commercial reasons," Alexei Komech, the director of the State Institute of Art History, said on the museum's web site.

Workers will start pulling down the hotel in mid-September.

Now, a thin layer of dust covers the hotel's lower floors, disturbed only by the odd caretaker and security guard. Piles of wood, torn from the hotel floors above as the building is slowly gutted from within, wait to be lugged away.

In the second-floor restaurant, caretaker Olga Markova sadly wanders around. "I have worked here for 10 years. I know every inch of the building," she said.

Markova plans to take a small piece of the building as a souvenir of her time.

"When they knock it down, you should take this part," she said jokingly, indicating two malachite pillars.

Hotel Moskva, finished at the height of Stalin's power and demolished a decade ago under Moscow's construction-happy former Mayor Yury Luzhkov, will...
news

From the Archive: Mini Sub Attracts Max Attention From KGB

Back in 1987, when the police discovered Mikhail Puchkov floating on the Neva River in what is probably the world's smallest submarine, they were...
news

From the Archive: Thousands Mourn Murder of Russian Reporter Kholodov

Twenty years after investigative reporter Dmitry Kholodov was killed by a booby trap bomb — the first high-profile assassination of a journalist...
no entry