Misty nighttime views of Moscow, sepia stills of sailboats floating on a calm sea, and monochrome shots of nude women posing awkwardly on rocks are just some of the remarkable shots by Yury Yeremin in the exhibit "Old Moscow, Favorites" now on at the Multimedia Art Museum.

"We decided to take his collection and show who Yury is and what it really means to be this brilliant photographer," said curator Yelena Misalandi.

Yeremin was renowned for using a pictoralist style in his works. Pictorialists strove to equate photography with painting using soft-focus lenses and sophisticated printing techniques. It took off in Europe in the late 19th century and found devotees in Russia in the early 20th century.

"He studied to be a painter. It wasn't until the 1920s that he turned to photography. He combined his interest for painting and photography in his work," Misalandi said.

His subjects are wide-ranging, from expansive roaming landscapes and nudes to Islamic architecture in Samarkand.

Yeremen along with other Russian pictorialists, such as Alexander Grinberg, Nikolai Andreyev and Nikolai Svishchov-Paola, sought to evoke emotion and feeling of the individual in their photography in contrast with Soviet photography, which looked to state ideology rather than aesthetics.

In 1928, Alexander Rodchenko, one of the most famous and influential artists and photographers of the 1920s, wrote: "It is not so much painting we are struggling with (it is dying anyway), but rather with photography 'a la painting.'"

By the mid-1930s, as the idea of socialist realism was foisted upon artists and photographers, the pictorialists' time was over. Those who did not conform were labeled bourgeois idealists or enemies of the state.

Multimedia Art Museum head Olga Svliblova, in her book "Quiet Resistance: Russian Pictorialism of the 1900s to 1930s," lamented about how, by the 1930s, nearly all the pictorialists had been forced or coerced into embracing the ideology of the community rather than the individual. 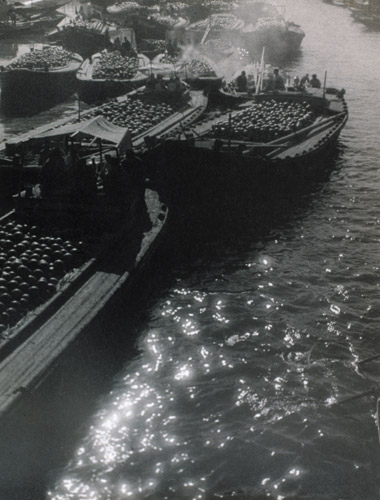 Boats packed with melons on the Kutum River in southern Russia, 1929.

Pictorialists were fond of the nude form, and Grinberg was sent to the camps for the "dissemination of pornography."

"Yeremin was different," the curator Misalandi said. "Despite constant pressure, he never lost sight of what he wanted to express. His art never conformed. He was a pictorialist in the '20s, '30s and '40s."

There was no option of being a pictoralist in public, but Yeremin locked himself in the bathroom of his communal apartment, where he developed pictoralist photos in miniature format.

"Any one of the images that Yeremin printed would have been sufficient to condemn him," the museum wrote in an essay about Yeremin.

Three other exhibitions have also opened at the museum recently.

"Best of Elle," a retrospective of some of the best photographs from the Elle magazine's photo archives. The show displays works from the likes of designer Karl Lagerfield, U.S. music-video director and celebrity photographer Melodie McDaniel and German fashion photographer Federike Helwig.

"A Marvellous Carmen" is an exhibiition by Finnish photographer Stefan Bremmer, documenting the production of "Carmen, Bird of Prey" at the National Finnish Opera, which used actors and dancers with Down syndrome.