"Of all my offspring, this composition caused me the greatest birth pains and later the greatest grief, and therefore I value it more dearly than any of the others," Ludwig van Beethoven wrote late in life about his one and only opera, "Fidelio."

Beethoven labored over "Fidelio" for more than a decade. It first appeared in November 1805 at Vienna's Theater an der Wien and lasted there for a mere three performances. No doubt contributing to its lack of success was the occupation of Vienna just a week earlier by Napoleon's army, which resulted in audiences made up largely of the invading French, most of them unable to understand the opera's German text.

In somewhat revised form, it reappeared the following March, and though quite well-received, it again had only three performances, owing to a dispute between the composer and the theater's director.

"Fidelio" returned once more to the Vienna stage in 1814, with a revised and shortened libretto and considerably reworked score. This time it proved an overwhelming success and eventually went on to become a standard part of the international operatic repertoire.

The Pokrovsky Chamber Musical Theater has brought to its stage, for the first time ever in Russia, the very seldom performed original "Fidelio" of 1805, commonly known as "Leonore."

Among the somewhat eccentric choices of repertoire made in recent seasons by the Pokrovsky's distinguished musical director Gennady Rozhdestvensky, including Wolfgang Amadeus Mozart's "Idomeneo," revised by Richard Strauss, Carl Maria von Weber's "Die drei Pintos," as completed by Gustav Mahler, and Franz Schubert's "Lazarus," as completed by Russian composer Edison Denisov, "Leonore" seems to me the most worthwhile and the most successfully executed.

Beethoven's opera is set in 18th-century Spain and tells of how the Leonore of its title disguises herself as a prison guard, assuming the name Fidelio, and saves her husband Florestan from certain death in a political prison under the control of his bitter enemy, the evil and corrupt Pizarro. For Beethoven, the story provided a perfect opportunity to express on the stage his oft-stated views concerning the struggle for justice and liberty.

Somewhat to my surprise, it proved a great treat to hear Beethoven's first thoughts on what he eventually transformed into an operatic masterpiece of the first order. The Pokrovsky's staging is of unusually high quality, and the cast I heard proved almost fully capable of coping with the composer's often daunting vocal demands.

"Leonore" tells the opera's story in much less compact and dramatically coherent fashion than does the final version. And missing from it are some of the latter's most powerful moments, such as Leonore's denunciation of Pizarro in the great aria "Abscheulicher! Wo eilst du hin?" and the scene of rejoicing at the opera's very end. Other important passages, such as the profoundly moving prisoners' chorus, remained yet to be fully realized.

Nevertheless, I came away from "Leonore" convinced once again that, like practically everything Beethoven ever wrote, it fully deserves to be heard and to be treasured. 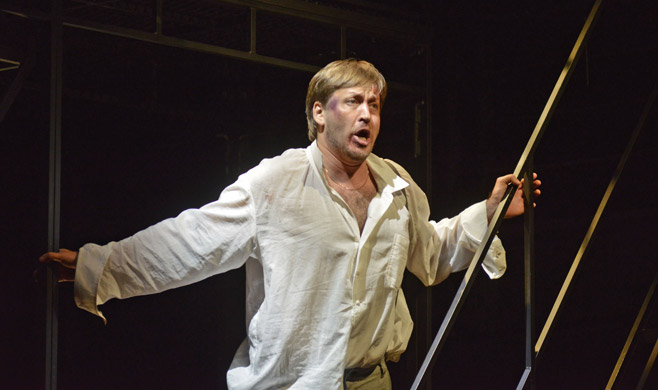 Florestan is played by Igor Vyalikh, a perfect fit for the role in this staging.

As a setting for the opera, veteran designer Viktor Volsky has created a complex array of steel girders, cages and stairways that provide a forceful prison atmosphere. Director Mikhail Kislyarov makes full use of its resources and tells the story in clear, straightforward fashion.

"Leonore" calls for some superb singing on the part of its three most important characters: Leonore, Florestan and Pizarro. And that is what the Pokrovsky managed to come up with, at least on the evening I attended.

In writing his initial version of the opera, Beethoven seems to have had in mind a lighter voice for the title role than the one for which he wrote the music of Leonore in the final "Fidelio." He also incorporated more than a few touches, missing later on, that might have come straight from the pen of Mozart. Soprano Irina Kurmanova brought to the role all the vocal power required, sang it with beauty and elegance, and proved equally adept at playing both a fetchingly feminine Leonore and a convincingly masculine Fidelio.

The solid tenor voice of Igor Vyalykh was a perfect fit for Florestan and could no doubt have done justice to the more demanding music Beethoven eventually added to the part. Baritone Alexei Morozov absolutely reeked of evil as Pizarro and sang the role in uncompromisingly solid fashion.

At the performance I attended, Maestro Rozhdestvensky was replaced by his young assistant, Alexei Vereshchagin, who handled the score with much skill and drew playing from the theater's undersized orchestra that nicely compensated in quality for its deficit of string players.