The Moscow English Theatre launches it's new season this weekend with two one-man comedies — "Bond: An Unauthorized Parody" and "The Only Way Is Downton" — that were hugely successful at this year's Edinburgh Festival.

"Bond" and "Downton" are each hourlong parodies — one of Ian Fleming's super-spy creation "James Bond" and the other of the hit television show "Downton Abbey" — that play with essentials of both but don't depend on any audience familiarity with the originals.

"Don't worry if you've never seen a 'Bond' film," Gavin Robertson, who wrote and performs in the show, told The Moscow Times. "It's a story. … You'll understand it the same as you would any new movie release."

The Moscow English Theatre was set up in spring 2013 with the aim of bringing professional English and American productions to Moscow. It debuted with a well-received production of Willy Russell's comedy drama "Educating Rita."

The two new one-man shows reflect what is "popular in the U.K. and U.S. at the moment," said Jonathan Bex, founder of the Moscow English Theater.

This will be Robertson's second foray onto a Moscow stage under the auspices of the Moscow English Theatre after last year's well-received and attended space-movie parody "2013: A Space Oddity." It proved that the language and culture gap could be bridged, Robertson said, and he thinks he will get a similar response this time around.

"The point of 'Space Oddity' and 'Bond' is that I'm using cliches from a whole movie genre," he said. "Hopefully those are familiar signposts to any audience," he said.

"In the same way that one can follow a story in a different language without subtitles, the narrative should be clear," he said. "I probably will slow the pace a fraction … but the style uses the language of film to tell the story. There are puns and in-jokes, of course, … but by and large, I'm confident. 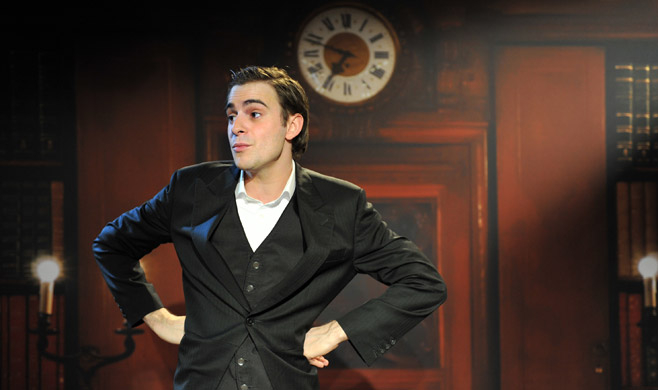 The Only Way Is Downton

Kempner was called the "Energizer Bunny of impersonators" for his show.

"'Bond' is a comedy," he said. "Relax and don't worry about treating me as something sacred. It is not Chekhov!"

Robertson has already taken his "Bond" show around the world since he created it in July 2013 to much acclaim.

"There is real pleasure in seeing Robertson use his low-key physicality to tell a high-gloss story," wrote Britain's Fringe Review.

The Moscow dates will be the first time he has performed it before a predominately non-native English-speaking audience, but he has no worries. On the contrary, he says: "It's a gift … to be coming to Russia with love."

"The Only Way Is Downton" is performed by Luke Kempner, a British actor who has appeared in the musicals "Les Miserables" and "Avenue Q" in London. The show, written by Kempner and Jeremy Limb, has already done well in England with Stephen Fry calling Kempner "a fine impressionist giving a splendid display of 'Downton-ry.'"

A clip of Kempner running through a host of "Downton" characters on YouTube has had more than 100,000 views. Kempner uses more than 30 different voices in the one-hour show, which was a hit on London's West End and at the Edinburg Fringe festival. The Huffington Post called him the "Energizer Bunny of impressionists," with the Daily Telegraph calling it a "remarkable tour de force."

Bex said the play is accessible even if you have never seen a second of the series, which follows the lives of British aristocracy and the servants below the stairs at the start of the 20th century.

Luke was mindful, Bex said, "to appeal to as wide an audience as possible and therefore gave it a storyline that stands independent of knowing the series."

"There may be laughs of recognition at times from those who do know the series, but an understanding of the piece won't be lessened [for those who don't]."

"He also throws in a few other popular British characters, and it'll be interesting to see how many of those are recognized. … It's all good fun."

"The Only Way Is Downton" is on Friday at 7 p.m. and Saturday at 8 p.m. Mayakovsky Theater, Small Stage. 19 Bolshaya Nikitskaya Ulitsa. Metro Pushkinskaya, Arbatskaya. 495-290-4658. moscowenglishtheatre.com

Solyanka is one of Russian dishes that has a very convoluted and confusing history. Is it a soup or a main course of stewed cabbage? Is it spelled &nbsp...