Artist Vladimir Dubossarsky has long lived and worked in a boathouse on the bank of the Klyazma River and now has opened a special exhibit "The Artist's Home," in a hangar-like building in the Moscow region.

"This is an exhibition about myself representing different periods, and different searches I pursued, and different mindsets," Dubossarsky said at the opening of the exhibit last Saturday,

The exhibition features more than 50 works, many created specifically for the project and others made back in the 1980-1990s before the artist's collaboration with Alexander Vinogradov, which brought the duo, who specialize in huge Socialist realist-style canvases, much fame.

The building, which is used by Dubossarsky as his summer residence and studio, was built as a boathouse to store yachts in winter seasons and is now part of the plush Pirogovo resort. Dubossarsky's love for the place goes back to before the place was so elite. He was one of the people behind the famous Art-Klyazma festivals that took place there in the early 2000s.

"There are rooms dedicated to artists, to my family, to Soviet childhood, to my works derived from Facebook shares by my friends. 'The Artist's Home' is about the universe an artist lives in. There is the past, the present and some ideas of the future. It is not a static thing," Dubossarsky said.

The exhibition space is divided into improvised rooms with DIY-style walls of pallets painted in white. Some chambers feature interiors that he and his assistants lived in during the experiment. An observation tower with a staircase inside — all built of pallets — offers a view of the art from above.

Apart from wandering around rooms where the artist and his assistants have lived, you can see an area that imitates the interior and life in a squat on Tryokhprudny Lane in central Moscow, where Dubossarky worked with other artists in the early 1990s. 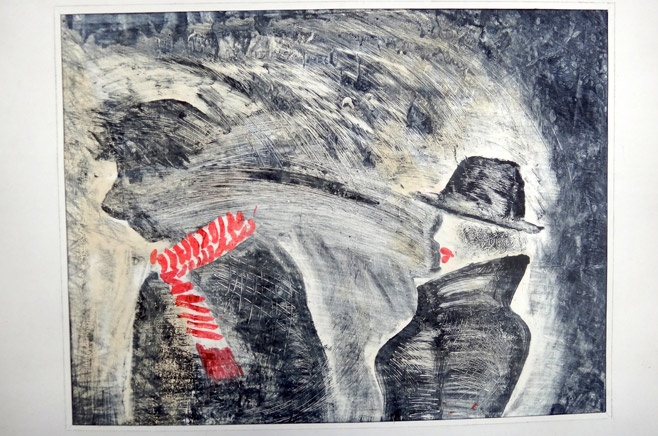 Visitors to the exhibit can see where the artist lives and a 1990s squat.

"The space was transformed for the exhibition by architect Yury Avvakumov, who built the walls of painted pallets and an observation tower," said Olga Chuchadeyeva of the Vladey company, a co-organizer of the event. "It is quite unusual, though this approach fits well with the surroundings, as it is not a conventional exhibition space, but a unique ground in a resort with beautiful landscapes."

Paintings are not arranged by periods or styles, or genres. Self-portraits dating back to the 1990s appear next to abstract works and genre pieces from 2014. A painting of a gas ring is close to "Gas Partnership," which shows President Vladimir Putin and his Chinese counterpart shaking hands over the recent gas deal with a bear and a dragon by their sides.

Other rooms are occupied by illustrations for kids' books, paintings inspired by Facebook shots shared by friends, older portraits and self-portraits. One of Dubossarsky's experiments is a five-part series based on Marina Abramovic's "The Artist Is Present."

Poster-style pieces in one of the central rooms reflect on the passing of time: "The 1990s are gone, the noughts are gone," is written on paintings. Everything will pass, and we will pass away.