ST. PETERSBURG — Queerfest, an annual LGBT rights festival in St. Petersburg, was forced to cancel most of its events following attacks, pressure from authorities, bomb threats and last-minute cancellations.

A group led by anti-gay lawmaker Vitaly Milonov tried to get into the venue where the invitation-only opening event was held last Thursday, one of a series of obstructions the festival has faced over the last week. Anti-gay protesters blocked the entrances and attacked the audience with an unknown gas and green dye.

The festival's opening event had already moved to a new site after a business center — the Queerfest's scheduled main venue,  — canceled the opening 90 minutes before its announced time.

About 200 people, including foreign diplomats, were gathered when Milonov and 15 to 20 protesters tried to stop the opening.

Showing his city deputy identification,  Milonov, who thought up the city's anti-gay law in 2012 tried to get in but was stopped by security guards. He ended up standing near the door, swearing and shouting insults while telling the guards that ethnic Russians should not protect LGBT people. He described the audience as "pedophiles who rape children." Attacks started minutes after Milonov left the building.

Having thrown vials containing a gas that smelled of rotting fish under the door, anti-gay attackers prevented visitors from entering and leaving, spraying green dye from syringes on them.

"Milonov left just a couple of minutes ahead of the attacks," organizer Anna Anisimova told The Moscow Times. "They met in the stairwell, or he passed the baton to them, but I can't say for sure because the fact was that thugs came just after Milonov had left." 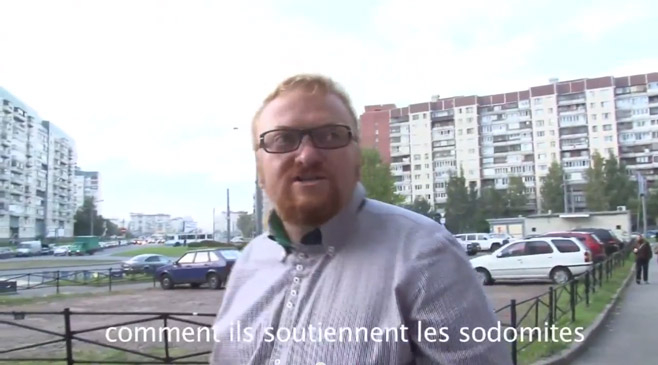 Vitaly Milonov speaking to channel France 24 whilst protesting outside the LGBT festival in 2013.

A number of people felt sick because of the gas, and one or two were taken away by ambulance. According to Anisimova, some 20 to 30 members of the public had their clothes spoiled by green dye, including two representatives of the St. Petersburg ombudsman, Alexander Shishlov.

The police that were stationed in large numbers outside the building did not intervene until Shishlov arrived and urged the officers to protect the festival's audience.

Othere events were also sabotaged. An art workshop organized in cooperation with the Manifesta biennale and a conference titled "Queer or What Is the Art of Being Yourself" were both canceled after the art space Loft Project Etagi refused to host the events an hour before the scheduled start.

The underground music club Zoccolo 2.0 canceled Queerfest's "Independent Music Night" event, which was moved  to the LGBT club 3L. The police then evacuated the venue due to a bomb threat.

Parents Day, a meeting with parents of LGBT people scheduled to be held on Monday, was also canceled "due to the inability to ensure the safety of participants. We fear for our parents. While we can cope with the situation, they don't have such strong nerves," Anisimova said.

The festival's closing event, the "Stop Homophobia in St. Petersburg" concert Saturday featuring Swedish rock singer Jenny Wilson, will be held Saturday, but the organizers may move it into another venue that is less likely to be pressured by authorities and anti-gay activists.

See www.queerfest.ru for more information about the festival.