The Gogol House Museum has opened a new wing with an interactive art installation imagining what author Nikolai Gogol's apartment may have looked like in the modern era.

The exhibition, which is entitled "#AVTORZHZHET," was created by artists Anna Rumyantseva and Alexei Tregubov, who have previously worked together on projects at the Moscow Museum of Modern Art and Mayakovsky Theater.

"We tried to gather everything that we could, even incompatible things, for the creation of some kind of effect or atmosphere," said Rumyantseva, who is also the curator of the new wing.

"What we ended up with was an experiment of sorts. This always happens in different ways, there is no recipe," she continued.

The director of the Gogol House Museum, Vera Vikulova, told The Moscow Times that they were looking for young artists who would create "some kind of explosion, something new, something unusual."

The exhibition consists of five apartment rooms in the museum's coach house. Vikulova feels that it is as though "Gogol has taken up residence" in the new wing of the museum.

The exhibition's entrance is through a wardrobe, which leads into the hallway. There, a telephone rings, which viewers are encouraged to answer. A stairwell is visible through an eyehole, and the author's fading footsteps can be heard.

"The key to this exposition is that we do not enter the space through a door, but specifically through a wardrobe," said artist Alexei Tregubov. 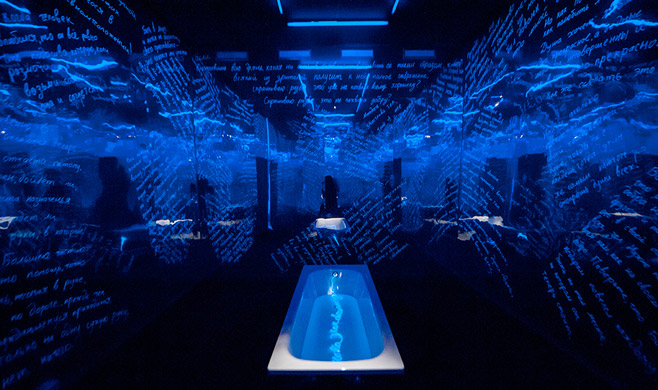 A neon quotation floats eerily in the water as visitors hear Gogol speak.

"For us, it is very important that we are spying on him — we have come in, but he has just gone out, and the sound of his footsteps can still be heard," he continued.

Nikolai Gogol, a 19th-century Russian-Ukrainian writer, is most famous for his gothic short stories, his satirical novel "Dead Souls" and play "The Government Inspector." The elements of surrealism which often feature in his works were used as a source of inspiration for the exhibition.

"We used aspects from all of his creative works," said Rumyantseva about the original texts, "we tried to take the deepest ideas which would heighten the atmosphere in each room."

The rooms in the exhibition include a lounge, dining room and bathroom. A multitude of quotations have been incorporated into the decor, such as words on the mirrored walls of the bathroom which only appear when the door is shut.

Likewise the television in the lounge plays a series of modern clips where, if you listen closely, it becomes clear that the dialogue has been taken from Gogol's works.

Despite the fact that Gogol was active in the 1800s, Rumyantseva commented that "it is surprising that the 19th-century texts are so compatible with our modern-day life."

The title of the installation, "#AVTORZHZHET," is a play on words on the fact that Gogol famously burned a collection of his manuscripts, among which was the second part of "Dead Souls."

Rumyantseva explained that the use of a hashtag in the title is "an attribute of this ultra-modern reading of his texts" and "also somewhat emphasizes the fact that Gogol is very modern."

The artists' intention was to present Gogol as a real person who is living and working in the space they have created.

"We began to be able to imagine how he could have lived, where and in which conditions," said Tregubov, who also focused on the way in which "creative ideas and thoughts emerge." 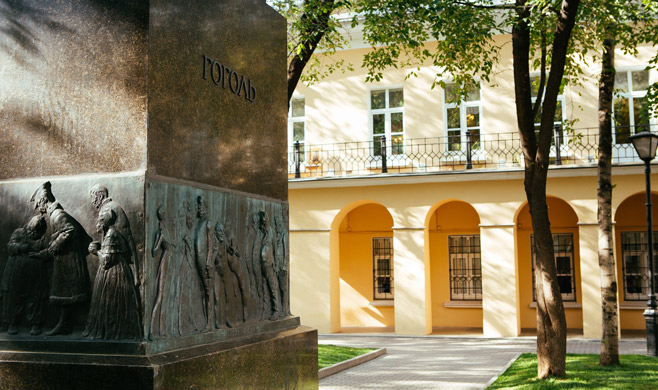 A statue of Gogol stands in the courtyard of the house near Novy Arbat.

This emphasis on the creative process is present throughout the installation. In the dining room, letters appear to be crawling over the food. Gogol's shadow can be seen on the wall, yet mysteriously there is no one sitting in the chair.

In the bathroom, a neon quotation floats eerily in the bathwater, and we hear the voice of the writer echoing around the room. He seems to be always thinking about his work, even in the most mundane of situations.

"The viewer finds himself in a situation where he himself happens to be both looking and solving riddles," commented Tregubov.

"All kinds of effects add to the atmosphere," he said of the technical aspects of the installation, which "create this impression of time, and the presence of the author, and also of his absence."

The final room is darkened, except for an illuminated door and a printer, which stands in the centre.

"Perhaps it is only in the final room that we understand that this is Gogol," said Rumyantseva, "otherwise, it is just a modern author, a modern writer."

When the viewer looks through the eyehole of the door in the final room, a motion-sensitive camera activates the printer, and the viewer receives a personal printed message.

For Tregubov, this finishing touch is important because "finally the viewer himself unexpectedly comes into contact with the story, as up until this point he has been an observer, then in the end he literally receives a message."

In this way the exhibition concludes with "these almost prophetic phrases," according to Rumyantseva.

Vikulova hopes that the new wing will become a platform for "a new direction of work, exploring new boundaries", by means of which they will be able to "build a bridge with the future generation."