"The New International," an exhibit currently on at the Garage Museum of Contemporary Art, takes a look at art that appeared in the 1990s.

The 1990s saw the fall of communism, the rise of the Internet and the social impact of late capitalism, said Kate Fowle, curator of the exhibit, and the show aims to portray how the decade was a turning point not only for the political and economic world but also for the art world.

The artists on show, from all over the world, are of two generations: those who rose to fame during the '90s, and those who came of age in that decade.

Talking about the layout of the exhibition Fowle said,"I tried to create the effect of going from dark to light through the pieces used."

The exhibition starts and ends withpieces of "We the People" by Danh Vo, a life-sized model of the Statue of Liberty that Vo created using the same metalworking technique, "repoussage," that was used in the late 19th century to make the original. Designed to show the arbitrary nature of how freedom is granted, the statue has been taken apart and lies in pieces around the museum. The piece will never be assembled again.

"The only place where you can still find this technique in use today is China, as they still use it to make Buddha statues," Fowle said. 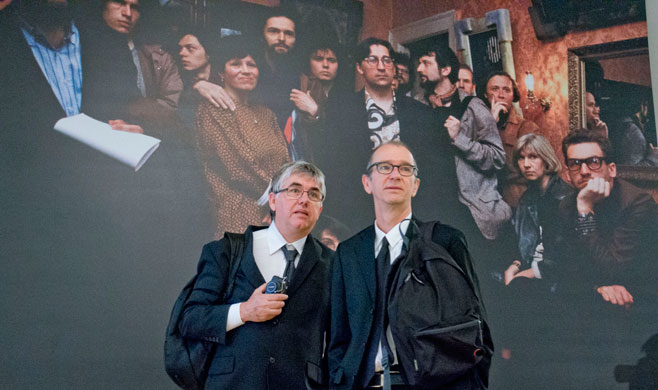 A work by Slovenian group IRWIN.

Two works document events of the 1990s. Johan Grimonprez's film essay "Dial H-I-S-T-O-R-Y" is a history of airplane hijacking. Revolutionary when it was made in 1997, four years before 9/11, it has a very different feel these days.

Also in 1997, Russian artist Alexander Brener walked into the Stedelijk Museum in Amsterdam and spray-painted a dollar sign on the Kazimir Malevich painting "Suprematisme." "The New International" looks at how this art action, or perhaps act of hooliganism, was perceived.

"I found it fascinating that so few people had actually seen the act, yet there was such a huge debate on the topic," Fowle said.

Santiago Sierra's "250-cm line tattooed on the backs of six paid people" is a black-and-white photo of six men each with a straight line tattooed across their backs. Sierra paid each of the men $30 to participate and to be branded for life. It is an uncomfortable and sad image to look at, with the men all hanging their heads. "It is a piece that enables you to question your values," Fowle said.

One of the most moving pieces of the exhibition is the nine-minute video "Turbulent" by Iranian-born artist Shirin Neshat.

Neshat, who was involuntarily exiled from Iran during the 1979 revolution while studying in California, only returned to her homeland in the early '90s. This piece from 1998 explores the role of women in the Iran that she returned to.

Two videos are projected onto opposing walls; one of a man singing a 13th-century love song. When he finishes, the opposing screen plays a woman singing a wordless song that is powerfully tragic and painfully sad.