“A scourge of obfuscating politicians, Mr. Paxman is renowned for his refusal to accept waffling or platitudes from lawmakers” is how The New York Times described British television news presenter Jeremy Paxman in June as he left the BBC’s flagship current affairs program “Newsnight” after a quarter of a century.

Beyond his regular stints on “Newsnight” and as host of the BBC’s intellectual quiz show “University Challenge,” Paxman is also a historian of British life in print and on screen, exploring subjects as diverse as the English, the Victorians, royalty and the British Empire. His latest, “Great Britain’s Great War,” comes as both a television documentary and book.

Paxman’s “Newsnight” career began in 1989 at the beginning of the end of the Cold War and a supposed new dawn of relations between the West and Russia, and it wraps up at the height of a new rift in relations.

He has had a front-row seat to the events of the last 25 years, and he reflected on the changing nature of the West’s relationship with Russia.

“I don’t think we do have much of a relationship,” he pointed out. “There is a chasm of misunderstanding, and I don’t suggest there is some easy way to get over that. By and large we are pretty self-contained, I think. There is insularity about the way we have looked at the world. Russia is a very, very big country which has a lot of interests. We, by comparison, are an island which really wishes the rest of the world would go away.”

Speaking to Hillary Clinton for one of his final “Newsnight” interviews in June, Paxman asked her: “Is Putin a dangerous man?” She replied: “He can be.”

Does he agree with the former U.S. secretary of state? “What I think about Putin is based upon a very limited apprehension of what he is about. It is neither here nor there, really, what I think.”

Though on the president’s image as the hard man of Russia standing up to the West, Jeremy concedes: “He is clearly a great nationalist.”

The social and cultural and economic relationship between Britain and Russia is very different to anything that existed in the past. Oligarchs have bought up Mayfair and football clubs such as Chelsea, and Russians are the third-largest group of foreign students at British boarding schools. But Paxman is not especially enamored of the presence of the new Russian money evident in London nowadays.

“I just observe that hot money moves around wherever it can find itself a home,” he noted. “So, is this a good thing or a bad thing? It is a very bad thing if you are a young person trying to buy a house in London. One sees all over West London, for example, Russians buying property and digging up the basements and generally driving the property market in a rather, I think, undesirable fashion. One sees them buying football clubs — this is basically hot money, most of it.” 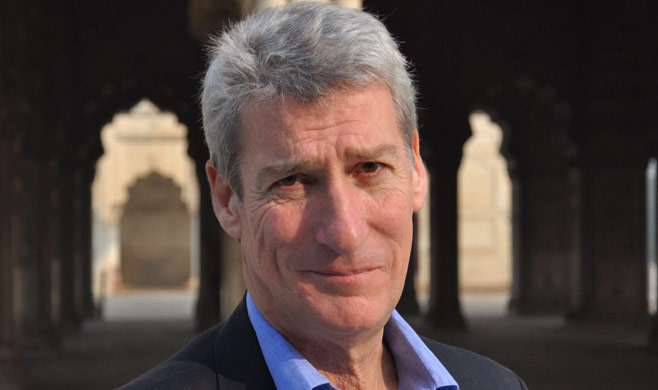 Paxman became known for a combative style on the BBC's "Newsnight."

Paxman defines “hot money” as “money that is acquired in questionable circumstances.”

Paxman is dubious about the origins of the Russian money. “In the days of communism there were not a very small proportion of Russians with vast amounts of money they needed to find a home for,” he added. “These people are essentially robber barons, and the fact that they choose to try to secrete their money in London, that they choose to send their children to private schools in this country, well good luck to those of them who have got the resources to afford those schools and institutions which benefit. But I don’t necessarily think it is that significant.”

In his 2007 James MacTaggart lecture in Edinburgh, Paxman declared: “In effect there are two estates that count, the popularly elected and the self-appointed.” He was referring to politicians and the British media. However, independent journalism struggles to survive in modern Russia and it is something Paxman regrets.

“There is no great toleration of independent journalism in Moscow, and I wish there were. I wish we were looking at a situation in which the country had changed, where journalists enjoy the same sort of freedoms they enjoy in the better parts of the West. But that is not the situation, as Anna Politkovskaya’s family could tell you.”

Paxman is forthright in his views of the Ukrainian crisis. “I think the European Union behaved very, very irresponsibly in the case of Ukraine,” he says. But it is the events in Europe of 100 years ago that form the center of Paxman’s latest book, “Great Britain’s Great War,” though he explains the significant differences between the Russian experience and the British experience as typified by the outbreak of trench Bolshevism in 1917 — mutinies in the trenches, with Russian soldiers refusing to obey orders and deserting.

“There was a serious fear, as you know, that once the Russian Revolution had happened that something similar might happen in Britain,” he acknowledges. “And those fears were not borne out. Why were they not borne out? I think a number of reasons, one of them being that by and large, the British army was run — though the war was, of course, brutal everywhere — it was run in a slightly more enlightened fashion than the Russian army. For example, soldiers were regularly rotated through the frontline trenches; they were not there for long periods of time. There was a better relationship between the officer class and the ordinary serving soldier. There was, I think, a greater empathy, a greater sense of ‘we’re all in this together’ than there was in the Russian army.”

In regards to Russia’s contribution to World War II, he believes there is really no argument that the war was essential and that “ the decisive element in all of that was the involvement of the Russians, and while the West has tended to go on about the contribution made on the Western Front, the key element is what happened on the Eastern Front, and I am slightly appalled that we very often tend to forget that.”