A giant crane towers over the Moscow stadium where Russia will stage the 2018 World Cup final and mounds of earth, pipes and cables are piled up where the soccer pitch should be.

Little is left of the Luzhniki Stadium except its outer walls and a statue of Communist revolutionary Vladimir Lenin outside as Russia sets about converting the Soviet-era relic into a state-of-the-art arena.

Perched beside the River Moskva, it is a symbol of a bigger transformation President Vladimir Putin wants to showcase at the World Cup — Russia's development since Soviet days into a modern state worthy of a seat at the table of top nations.

It is a risky gamble.

Brazil's experience of hosting this year's World Cup has proved sobering, with the focus on building soccer stadiums instead of national infrastructure causing street protests and the national team's failure on the pitch leaving a hangover.

While the Kremlin was able to ban protests in Sochi during the Olympics, tolerating them only in a designated area far from the sporting action, a blanket ban will be harder to enforce in 11 cities during the World Cup finals.

Putin will be particularly vulnerable to demonstrations in Moscow and St. Petersburg, scene of the biggest rallies during a wave of protests against him in the winter of 2011-12.

"It's a double-edged sword. These state events attract attention and are a good chance to showcase a country, but there is no end of downsides in terms of bad publicity," said Allison Stewart, associate fellow in the BT Centre for Major Programme Management at the University of Oxford's Saïd Business School.

Although he is less directly associated with the World Cup than he was with the Sochi Olympics, Putin's own personal and political prestige will be at stake. This is particularly important as his six-year presidential term ends in 2018 and he could run in an election a few months before the finals.

Putin was in Brazil for this year's final and sent officials to the tournament to prepare for 2018, but it is not clear whether Moscow has learnt lessons from its experience of hosting the Sochi Games and Brazil's problems in staging the World Cup.

"There doesn't seem to have been any soul-searching in Russia to really understand why the cost of the Games was so much more significant than it was originally meant to be. If they have done it, they certainly haven't communicated it," said Stewart, who conducts research on events such as the Olympics.

Although winning the right to host the Winter Olympics and the World Cup in quick succession stirred national pride, Moscow has faced calls for the finals to be played elsewhere because of its role in the Ukraine crisis and media allegations that the World Cup bidding process is marred by foul play.

Republican U.S. senators Dan Coates and Mark Kirk cited Yugoslavia's exclusion from the 1992 European Championship and 1994 World Cup over the wars in the Balkans when they pressed such demands in a letter to soccer's governing body FIFA.

"It's absurd! Russia has a stable social and political system. There is no point in putting forward this argument. Russia won the right to host the tournament fairly and is a faithful partner," Sports Minister Vitaly Mutko told Reuters. 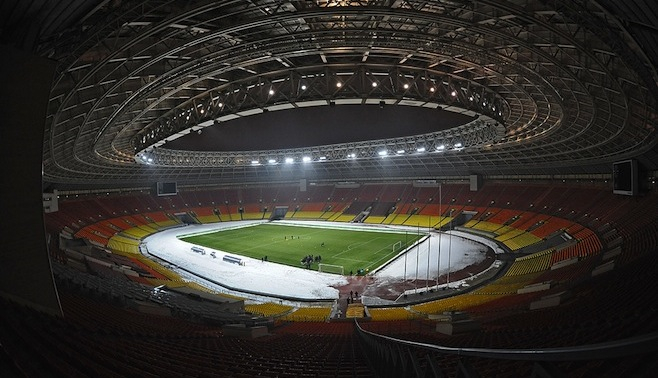 Only the outer shell of Moscow's Luzhniki Stadium will be kept intact for the 2018 World Cup.

Russia will host the 2018 World Cup in 12 stadiums in 11 cities, with Games being played at two stadiums in Moscow.

The most westerly venue is Kaliningrad, the main city in an exclave next to Poland and Lithuania, and the furthest east will be Ekaterinburg, the city in the Ural mountains where the last tsar was shot dead shortly after the 1918 Bolshevik revolution.

Others are Volgograd, which was hit by two suicide bombings that killed 32 people plus the bombers in December, Kazan, Samara, Sochi, Saransk, St. Petersburg, Nizhny Novgorod and Rostov-on-Don, near the border with Ukraine.

The Sports Ministry said in March that hosting the World Cup would cost 620.5 billion rubles ($18.16 billion), with 172.6 billion being spent on building and upgrading sports facilities and the rest of the sum going on infrastructure development.

But Prime Minister Dmitry Medvedev has said the World Cup will probably cost Russia more than $20 billion and critics say costs are likely to spiral, as they did for the Sochi Games.

Russia has not said how much the Winter Olympics cost in the end but the figure of $51 billion cited by media is more than four times the $12 billion price tag of Russia's initial bid.

Boris Nemtsov, an opposition leader, said the costs could be unsustainable for a country already on the verge of recession, with capital flight of $75 billion in the first half of 2014 and possibly facing more Western sanctions over the Ukraine crisis.

"All of these factors, the geopolitical madness and sanctions, are of course a path to Russia's bankruptcy," Nemtsov said.

He also said contracts for the stadiums and other infrastructure were open to corruption following critics' accusations that Olympic deals went to Putin's allies.

"What is most important now is public control over the money. Putin has not instituted any big criminal case over theft at the Olympics," he said.

The Kremlin has denied criticism over the handling of the construction contracts for the Sochi Games.

"Our country has a rich history of holding major sports tournaments, and this will be something special," Mutko said. 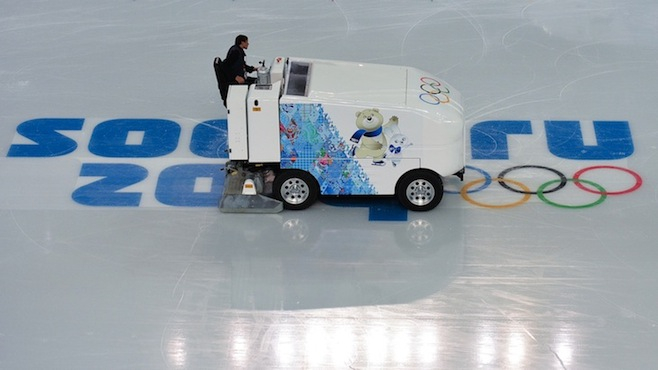 Russia has not said how much the Winter Olympics cost in the end but the figure of $51 billion cited by media is more than four times the $12 billion price tag of Russia's initial bid.

Not everyone shares his certainty, not even every soccer official. Some locals also wonder whether the national team is up to the job of showcasing Russian football after failing to get past the initial round in Brazil despite having a highly paid and experienced coach in Italy's Fabio Capello.

"Our football is like murky water, a gateway for corruption. This is not going to go away in the run-up to the 2018 World Cup," said Alisher Aminov, president of the national Fund for the Development of Football.

Aminov, a candidate for the presidency of the Russian Football Union, also foresaw financial problems hosting the World Cup so soon after the Winter Olympics, a problem only slightly less daunting than Brazil's hosting the 2016 Olympics only two years after the World Cup.

"The question we need to ask is does our country need the World Cup and other major events?" he said. "So far the government has allocated 620 billion rubles on the World Cup from the federal budget, but this figure will rise. Will there be transparency? Unfortunately experience from the Winter Olympics in Sochi shows this is unlikely."

Aminov described the poor state of soccer in Russia as a "reflection of the country as a whole", an alarming statement for Putin and his hopes of showcasing Russia at the tournament.

Aminov's remarks may also worry international sponsors, especially after Russia attracted bad publicity at Sochi over a law banning the spread of "gay propaganda" among minors.

There were, in the end, no mass protests in Sochi and no attacks by groups fighting an insurgency against Moscow in the North Caucasus region near Sochi. But preventing such protests and guaranteeing security will be harder at a World Cup played in several cities spread over thousands of kilometers.

Putin has promised to waive visas for fans but transport could be costly and time-consuming for visitors.

Almost no Western leaders attended the Sochi Olympics in February and the U.S. and the EU have imposed visa bans and asset freezes on some Russian officials and firms since then over the Ukraine crisis.

But Mutko is upbeat about 2018 and says preparations are on track, including financing and construction, with work under way on five stadiums and due to start soon on the last seven.

At the Luzhniki Stadium, which will host the opening match as well as the final, only a skeleton remains of what was once the Central Lenin Stadium which opened in 1956 and hosted the opening ceremony of 1980 Olympics at the height of the Cold War.

Men in hard hats and overalls are busy at work, with brightly colored seats piled out inside and outside the stadium after being ripped out for the makeover.

It is intended to be a modern stadium that will impress the world but chief construction supervisor Murat Akhmadiyev said inside the stadium: "The spirit of 1956, of the opening of the Olympics, will be preserved here."

After the World Cup, some stadiums will be handed to local authorities and are intended to make money as well as develop sport across the country, a move that follows Putin's decision to revive a Soviet-era national sport and health program.

Many Russians are proud to be hosting the World Cup.

"I think we've got it all ... It's only the cities that we need to bring up to scratch — bus stops and all that — so that when foreigners come, they say: 'Wow, Russia is so beautiful',' said a Moscow resident who gave his name only as Kirill.

Russia Looks Ahead to 2018 World Cup