The Manifesta art biennale, slated to open in St. Petersburg at the end of June, may have to be canceled due to the difficulties of organizing such an event in Russia, chief curator Kasper König told Deutsche Welle.

Manifesta has been plagued by controversies since the decision to hold the event in St. Petersburg this year: About 2,000 intellectuals and arts figures from Europe and Russia have signed a petition in favor of changing the festival’s location due to Russia’s law against gay propaganda.

Following Russia’s annexation of Crimea, Ukrainian artists urged international participants to boycott the biennale, and St. Petersburg art collective Chto Delat, or “What to do,” announced plans to hold their own competing art festival at the same time as Manifesta.

König’s statements are a reversal of previous remarks in which he has defended the choice of St. Petersburg as the location for this year’s festival. In April, König warned against letting politics override the arts festival, saying that “the environment and the possibilities for this exhibition are very rich and it would be a mistake to reduce our possibilities down to the level of just making a particular political statement.”

However, in König’s recent interview with Deutsche Welle, the curator confessed that politics were far from the only problem hindering Manifesta, saying that due to problems with cash flow, Manifesta has only been able to pay its Russian staff irregularly, and the loose, idealistic structure of Manifesta has had conflicts with the conservatively managed State Hermitage Museum, their partner in St. Petersburg. König also said he had been poorly informed about the situation in Russia when he agreed to curate the biennale, adding that “the ink on my contract was still wet when that appalling anti-gay law was passed.”

König said that in the months that he has spent working in St. Petersburg, “It became clear to me that I was working in a country where there is no civil society,” adding that “[in Russia] practically anyone can make a law and it is waved through as long as that person has enough money and power.” 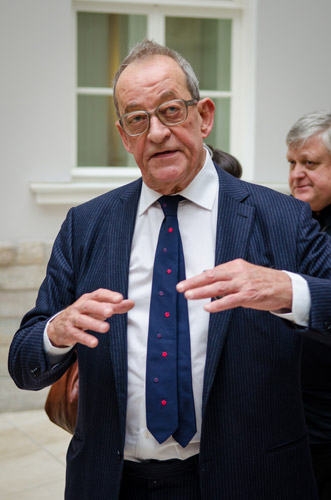 Manifesta curator Kasper König has said the festival may be canceled.

State Hermitage director Mikhail Piotrovsky agreed with some of König’s views on Russian law in a recent interview with The Financial Times. “The anti-gay legislation is nothing in comparison with the real legislation that we have,” Piotrovsky said. “We have legislation against hurting religious feelings ... and this is terrible ... Gay legislation is just a small part.

Piotrovsky commented on the importance of avoiding politics in the Russian art world, adding that art exhibits and performances are too frequently subverted and turned into divisive political statements by one side or another. As director of one of the country’s most visible and respected arts platforms, Piotrovsky must walk a very fine line to avoid stepping on the third rail of politics: “I can be sacked in one minute,” Piotrovsky said.

Deciding to host Manifesta, a roving contemporary arts festival, at the Hermitage was a bold move, and it remains to be seen whether Piotrovsky will emerge unscathed from the aftermath, even if Manifesta does take place as planned. As for König, the German curator seems to have soured towards Russia, and it seems unlikely that he will be making a repeat appearance in the Russian arts scene.

“I am bothered by the Russian tendency of having to come to terms with so many things and by the passiveness … I have stopped watching Russian television — I cannot stand the brainwashing anymore,” König said in the recent interview.