The true mark of Russian hospitality is being offered a cup of tea. In fact, the popular drink's place in Russian history can be dated back to the 17th century, with the first Romanov Tsar Mikhail Fyodorovich being a fan of Chinese tea.

Back then, tea entered Russia via the "Great Tea Road" with a route through Siberia. However, because of the long and difficult journey, tea was only affordable for the upper class and it was only after the Trans-Siberia Railway was built that tea became readily available to all.

"In Russia, people tend to drink tea and coffee all day long. In many other countries like England and Italy, they have a much more specific tea or coffee culture," said Igor Sverchkov, a tea specialist and product manager of the tea boutique chain Untsiya.

According to him, the tea or coffee preference in a country is influenced by its colonial past. Since Russia did not have any colonies and is situated between China and Europe, they took the best of both sides, importing tea from the east and coffee from the west.

"Tea and coffee are both widely drunk in Russia. Supermarkets offer a wide range of different teas as do boutique stores like Untsiya. Russians are spoiled for choice when it comes to tea," Sverchkov said. "People have the opportunity to try all sorts of different types of tea in this country."

Untsiya opened its first tea boutique in St. Petersburg in 2002, rapidly growing and expanding to Moscow. Now, they have more than 100 shops throughout Russia. Their shops showcase a broad assortment of teas from China, Sri Lanka, India, Taiwan, Japan, Germany, South Africa, Rwanda and Kenya.

"We sell teas characteristic of each country but also some less famous tea types," says Sverchkov. "Our approach is creative. We work with tea factories that want to try something new and offer something extraordinary. Therefore, we have suppliers who make some types of tea exclusively for us." 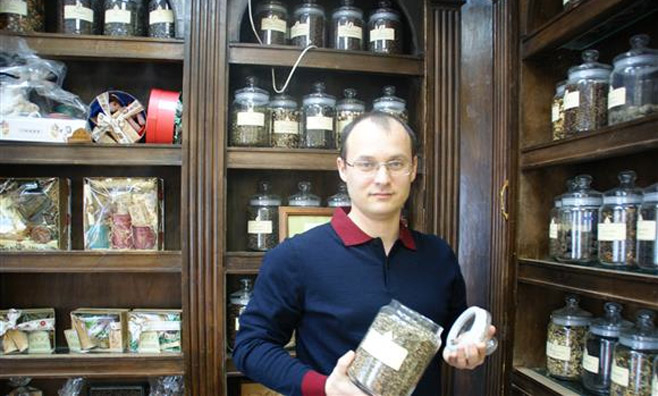 Igor Sverchkov says Russians are now spoilt for choice in types of tea.

Despite there only being two different tea plant varieties, Camellia Sinensis and Camellia Assamica, it is possible to produce endless variations in tea by varying the degree of oxidation often referred to as "fermentation." But there are many other aspects of the tea production process that strongly influence the final taste. Due to the complex, heterogenic structure of a tea plant, the part of the leaf used is important; whether it be the upper part or the lower part, the younger or the older leaves used. For example, the upper part of the plant is responsible for a creating a strong aroma, with more caffeine and theine, whereas the bigger and older leaves contain more vitamins.

According to Sverchkov, it is also difficult to say which kind of tea is healthier because the effects of tea vary from person to person. Also, the taste of the same type of tea can differ depending on the week it has been gathered, he said. "If it rained before the harvest, you can notice that in the flavor." In India, factories sell their tea at a weekly auction. Some factories produce about 100 kilograms of unique, premium-grade tea each week so many tea companies simply buy their tea from a few different factories and mix them all up afterwards. However, as Sverchkov explained, every harvest has its own characteristics and by mixing them, the unique taste of each harvest is lost. Therefore in order to preserve the flavor of each individual harvest, Untsiya does not mix the teas it buys. That is why the same tea may have a slightly different taste as it depends on what week the tea was bought.

As well as selling unblended tea, Untsiya also offers blended tea which they import from Germany, the homeland of tea blending. Their blended tea assortment includes herbal and fruit teas resembling beverages like rooibos and South American mate. "Some teas are better to drink in summer than others," Sverchkov advised. "In Russia, black tea is popular during the whole year. However, during summer we sell more green tea, rooibos and mate because they are more refreshing."

Another refreshing way to drink tea is with lemon, which, according to Sverchkov, is how Russia also contributed to modern tea culture. "By putting two exotic products together, they were the first people who drank tea with lemon," he said.