“The name’s Bond, James Bond” are the most exciting words in the movies and were first spoken on-screen by Sean Connery on the evening of Friday Oct. 5, 1962 at the world premiere of “Dr. No” in London. This first sight of the ultimate Cold War warrior came only two weeks before the Cuban Missile Crisis. It was also the very same day The Beatles released their first record — “Love Me Do.”

Fifty-two years later, in the era of the Ukraine crisis and Edward Snowden, the Multimedia Arts Museum in Moscow is hosting “Designing 007: 50 Years of Bond Style” from June 11 to Sept. 7. The exhibition was originally staged to great acclaim at London’s Barbican in the Bond-rich year of 2012, followed by showings in Toronto, Shanghai and Melbourne. It is curated by fashion historian Bronwyn Cosgrave and Lindy Hemming, who worked as costume designer on five Bond movies, from “Goldeneye” in 1995 to “Casino Royale” in 2006.

“Designing 007” is MAMM’s big summer exhibition. It allows Muscovites to explore 500 props and gadgets, sets and costumes, photographs and production design drawings from the production company Eon’s own archive. There are a dozen themed rooms — such as Q’s Lab or the Casino Room — each taking its cue from the movies, taking the visitor on a journey across 23 films. There is the exploding attache case featured in “From Russia with Love” and the Aston Martin DB5 from “Goldfinger,” Roger Moore’s space suit from “Moonraker” and the villian Scaramanga’s golden gun. The exhibition’s premise is the look and design of Bond since the early 60s, all accompanied by clips and extracts from the movies.

James Bond’s cinematic adventures have been appearing regularly since 1962, are a permanent fixture of the television networks in Britain and have always been available on DVD and Blu-Ray. The last film, “Skyfall,” was a national event in Britain with a world premiere at the Royal Albert Hall in London in October 2012, complete with royal guests, Princes Charles and the Duchess of Cornwall. The hall seemed an appropriate venue as it is traditionally associated with flag-waving that accompanies the patriotic Last Night of the Proms.

Of course, the films were officially banned in the old U.S.S.R., though in the mid-1980s, they did start to surface on bootleg video cassette tapes. With the end of communism, the films started to circulate in Russia and have become so popular to the extent that, according to website Box Office Mojo, “Quantum of Solace” made $18 million and “Skyfall” made $25 million across Russia and the CIS. 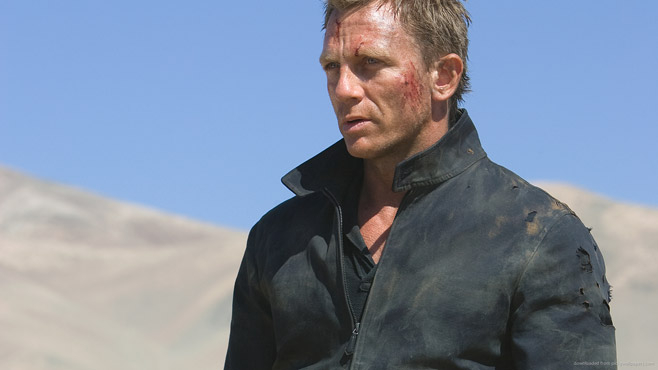 The modern Bond, played by Daniel Craig in films like "Quantum of Solace," is said to be grittier and less refined.

The series has always engaged in a brinkmanship with itself, each successive film attempting to top what had gone before with something more outlandish and more breathtaking. “Skyfall” continued to get mileage out of the formula by offering up a succession of breathtaking action-pieces, which is the reason people watch the films.

Craig’s current hard-as-nails Bond. Bond can seduce a villainess whilst sighing “the things I do for England” in “You Only Live Twice,” ski off an Alp and float down on a union flag parachute in “The Spy Who Loved Me” or break into a Russian chemical weapons factory on a sabotage mission uttering the words “For England” in “Goldeneye.”

In 1995, “Goldeneye” marked a turning point — not only a continuation of the series and a relaunch of the films and characters after a six-year hiatus, but it also addressed the question of how 007 could function in the post-Cold War world. Bond had lived through detente, the 1980s arms race and glasnost. So in the film when Bond confronts the MI6 traitor, it is symbolically in a St. Petersburg junkyard of statues of former Soviet leaders. And that is the secret of the series’ success — it still holds our attention by keeping up with the times. Nowadays it is not the nuclear threat, but rather cyberterrorism that casts its shadow over East and West, something which was at the heart of “Skyfall.”

The next Bond film is due for release worldwide in October and November 2015, but little is known about it other than that Sam Mendes will be directing once again and Daniel Craig is returning to play the role of 007.