As racy Russian plays are criticized by government authorities in Russia, they seem to be enjoying a burst of popularity abroad. In "A Dashing Fellow,"  a play based on three short stories by Vladimir Nabokov, rape, sexual perversion and drug addiction happily exist alongside beauty, love and loss.

The play, which recently ran at the New Diorama Theater as part of the 2014 U.K.-Russia Year of Culture, was presented by Belka Productions, a theater company founded in 2011 that aims to present rare Russian and European plays to English-speaking audiences in innovative new productions.

The play is "a delightful medley of stories about chance encounters," according to Oliver King, the producer of this play and the executive director of Belka Productions. The narrator, the devil taking on the form of an old woman, weaves between the narratives, helping to join the stories together seamlessly.

The devil is the only character able to break the fourth wall, in order to introduce the audience to the characters and the timescale — the play is set in Germany in the 1920s, a poverty-stricken country overflowing with immigrants. The stories in the play — "A Matter of Chance," "A Nursery Tale" and "A Dashing Fellow" — represent a lot of Nabokov's own experiences, such being an exile and an immigrant in England and Germany.

The essence of the stories is the depiction of "a collection of lost souls," King said. In particular, the main character in "A Matter of Chance," seems to show Nabokov's experiences clearly: The man's life has been torn apart; he has gone from living a privileged life with his wife in St. Petersburg to working as a train conductor in Germany and feeling completely alone.

In the current political climate, there are certain challenges in presenting Russian plays to an English audience. Belka Productions stages both little-known Russian plays and new adaptations of literary classics. In the case of this play, Oliver King reported that "audiences are not quite as high" as he would like it, and political issues resulting in the loss of an anticipated sponsorship deal. For other plays, it had been difficult to get visas organized for the Mossovet theater troupe from Russia. 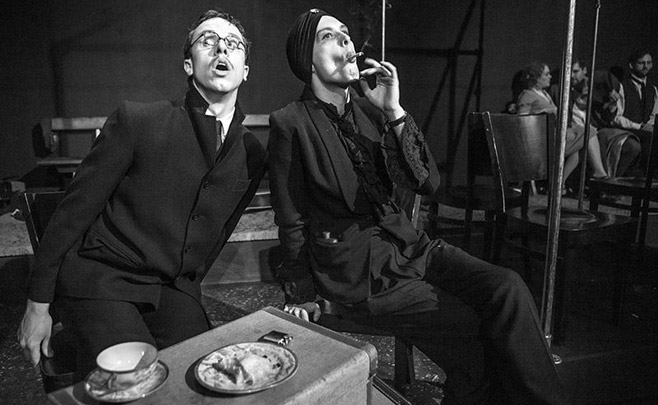 Despite its Russian roots, actors feel the play has a universal message.

However, the plays put on by Belka Production do have a large fan base in the Russian community. The Russian tradition of respect for the arts, whether theater, ballet, dance or music, is inspiring and something that the U.K. should learn from. Russia has brought us influential figures like Stanslavsky, Chekhov, Meyerhold and Vakhtangov which have played a large role in shaping the theater and film worlds.

As well as "A Dashing Fellow," Belka Productions has successfully staged the Konchalovsky season in the West End and "Warsaw Melody." "Warsaw Melody," a play with only two actors about "life and love behind the Iron Curtain," had never been staged in England before. Warsaw Melody as staged by Belka Production was very well received — it was Critic's Choice in The Times, as well as being reviews in the Telegraph, The Guardian and The Spectator.  "A Dashing Fellow" has had very positive feedback so far from the audiences.

While staging Russian plays in the U.K. is not without its challenges, Belka Productions says it is extremely rewarding to bring a rich tradition of theatrical naturalism to new audiences. "A Dashing Fellow" is a play presenting a mix of psychological stories based on universal themes that will be speak to different people in a multitude of ways.

Zasursky headed the department for 42 years and is considered the "father" of post-Soviet journalism.
weekend kitchen

August at the dacha! Down with boring boiled potatoes with shashlik! Long live hasselback spuds!
The MT List

Magnificent art, hot music fest, the return of the Kremlin changing of the guards and much more!