Contribute Today
By Ivan Nechepurenko
May 7, 2014

Fighter jets screamed across a snowy Moscow sky on Monday morning, in the last rehearsal ahead of Friday's Victory Day parade on Red Square.

But this year the annual occurrence evoked more than just the usual awe residents feel when glancing overhead, and some Muscovites noted on Twitter that this was the first time in many years that they had to wonder whether the jets were really just rehearsing or preparing for possible military intervention.

While such parades are commonplace for early May in Moscow, this year's came with a buzz resonating from what many political commentators have dubbed the Russian spring, a surge of patriotism prompted by Russia's involvement in neighboring Ukraine — and more so by the country's blatant defiance of the West after two decades of being relegated to the secondary role of the Cold War's loser.

In one clear sign of Russia's "win" in the Ukraine conflict, this year's celebration will feature the Black Sea Marine Corps carrying flags of Russia's Republic of Crimea and the city of Sevastopol. And the famous Swifts and Russian Knights aerobatic teams will perform in Crimea instead of Moscow.

But analysts say the events in Ukraine and Russia's involvement — while celebrated by many — are part of a larger scheme to provide a coherent state ideology and unite the population.

"The authorities are using these celebrations to bind together the unraveling social fabric of Russian society by making Russians feel their own greatness. I recall how in Soviet times this was a celebration with tears in one's eyes; now there is just too much bravado," said Mark Solonin, a World War II historian.

Russia's "rising from its knees" has turned into a routine mantra after first being coined by President Vladimir Putin years ago, and this idea has been given a powerful boost by his handling of the Ukraine crisis, and particularly by the annexation of Crimea.

If there were any doubts about the impact the Ukraine crisis has had at home, Putin's rating hit more than a four-year high in April, reaching 82 percent, according to the independent Levada Center pollster.

Every fifth Russian believes that Russia is already a superpower, according to another April survey conducted by the state-run VTsIOM institute. More than half the respondents said they believed the country would become a superpower in the next 15 to 20 years.

And in a move that shows how in tune Putin is to the nation's pride in its victory over Nazi Germany, Putin signed a law on Monday making the denial of Nazi crimes and the distortion of the Soviet Union's role in World War II a criminal offense that can result in up to five years in jail. 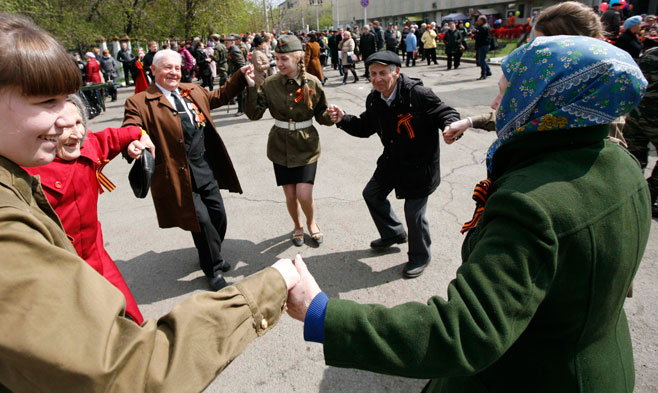 A group of people dancing Wednesday at a ceremony to congratulate veterans of World War II with Victory Day in the Siberian city of Krasnoyarsk.

Earlier in February, Putin proposed creating a single set of history textbooks with a unified concept of Russian history, including that of the World War II period. The measure was said to be designed to promote patriotism among younger generations of Russians.

Following the annexation of Crimea, all government agencies have enjoyed greater public approval than they did one year ago. The only exception is Prime Minister Dmitry Medvedev, who was surpassed by Foreign Minister Sergei Lavrov in terms of popularity.

"The significance of this memory and celebration is growing every year: people's memories, the feeling of gratefulness and duty, are complemented with practical tasks of preventing the revival of fascist ideology in Europe and the world," Lavrov said on Wednesday in reference to the upcoming Victory Day celebrations.

Lavrov specifically mentioned the recent violence in the eastern Ukrainian town of Odessa as an example of such ideology, calling it "blunt fascism." He hinted that ongoing violence in Ukraine added special significance to the celebrations.

Historians interviewed by The Moscow Times agreed that Russia's authorities were capitalizing on the current patriotic sentiment, and some said the memory of Russia's victory in World War II had been turned more into a cult than a sacred commemoration.

"It is sad that today we are left with only one national bond that binds us all together," said Oleg Budnitskiy, head of the Moscow-based International Center of History and Sociology of World War II.

"In addition to what we have from the past, we must also create something that is authentic to our time," he said.

At the same time, while the victory is often used as a tool of Russian politics, it must not be forgotten that the war was a great tragedy for the nation, Solonin said.

"The memory of war and the cult of victory are not the same. People whose relatives fought in the war usually remember it as a great tragedy, with victory being only the beaming light that illuminates people's suffering," Solonin said.