Contribute Today
By Raymond Stults
May 4, 2014

The Stanislavsky and Nemirovich-Danchenko Musical Theater has this season courageously taken on two of the most formidable beasts in the operatic stable, Richard Wagner's "Tannhäuser," which premiered last September, and Giuseppe Verdi's "Aida," which made its debut in mid-April.

Like "Tannhäuser," "Aida" has been treated to an excellent staging. But also like "Tannhäuser," the production leaves much to be desired musically, at least as heard in a performance by the first of two casts.

Once again I was left wondering, as often did in Moscow, why a theater would chose to undertake an opera for which it lacks adequate singers on its own roster and is either financially unable or simply unwilling to fill the gaps with the right sort of guest artists from elsewhere.

Verdi composed "Aida" on commission from the Khedive of Egypt and its premiere took place in Cairo on Dec. 24, 1871. Seven weeks later, the opera made its debut at Milan's Teatro alla Scala, where, unlike Cairo, the composer himself was involved in the production and the singers were his own hand-picked cast. Its melodious score and tale of love set in Egypt of the third millennium B.C. enjoyed instant success and led it soon to become a staple in the repertoire of opera houses throughout the world.

"Aida" first came to Russia in 1875, with productions mounted just three weeks apart in St. Petersburg and Moscow. Its most recent Moscow stagings were a quite clever and generally well-performed chamber version that premiered in 1996 at Helikon Opera and a gaudily decorated, musically underpowered production introduced a year later at the Bolshoi Theater, which mercifully lasted only a few seasons. 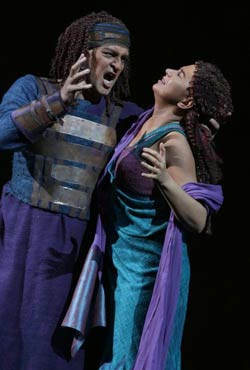 The Stanislavsky’s “Aida” has avoided the traditional pomp of the opera.

To stage its "Aida," the Stanislavsky and Nemirovich-Danchenko engaged  renowned German director Peter Stein, who has done away much of the pomp and grandiosity found in traditional productions of the opera and concentrated his attention on the intimate psychological drama that occupies two-thirds of its length, the tale of the warrior Rhadames, his love for the Ethiopian slave girl Aida and the jealousy of Princess Amneris, daughter of the Pharaoh, who wishes to claim Rhadames as her husband. It all works quite well, though the famous second-act Triumphal Scene has been pared down in scale to the point where it seems rather cramped. There are also moments in the action where a firm hand on the director's part seems to be missing, with the principals left too much to their own devices.

"Aida" plays against very effective monolithic, monochromatic sets by designer Ferdinand Woegerbauer that are nicely suggestive of the architecture of ancient Egypt. For costumes, Nina Cecchi has created an eye-catching mixture that ranges from dress appropriate to the time of the opera's action to what look like modern-day evening gowns.

Of the six principal singers in the first of two "Aida" casts, only the sturdy-voiced Rhadames of Uzbek tenor Nazhmidden Mavlyanov came within striking distance of meeting the opera's vocal demands.

Both soprano Anna Nechaeva, borrowed from the Bolshoi, in the opera's title role, and mezzo-soprano Larisa Andreeva, as Amneris. seemed to me examples of serious miscasting.

Nechaeva possesses some good clear notes at the top of her range and otherwise sings quite sweetly at low volume. But under even moderate pressure, her voice acquires what can best be described as a flutter, which made listening a painful experience, especially in great arias "Ritorna vincitor!" and "O patria mia" and the sublime duet with Rhadames in the final tomb scene.

I have greatly admired Andreeva's light mezzo-soprano and her considerable talent as an actress in other Stanislavsky and Nemirovich-Danchenko productions. But Amneris requires a very different voice, one both smooth and powerful and one that can confidently reach the very depths of the female range and yet soar with ease into soprano territory.

Baritone Anton Zaraev lacked the vocal presence to make much impact as Aida's father, the Ethiopian king Amonasro, while neither Dmitry Ulyanov, as the high priest Ramfis, nor Roman Ulybin, as the Pharaoh, displayed the smooth legato so essential to the roles Verdi wrote in the bass register.

Conductor Felix Korobov's handling of the score struck me as essentially a work in progress, with some passages quite sensitively interpreted and others not yet fully mastered.

Next up on the Stanislavsky and Nemirovich-Danchenko's operatic agenda is a new production of Wolfgang Amadeus Mozart's "Don Giovanni," staged by the theater's artistic director of opera, Alexander Titel, and due to premiere in June. My expectations for that run high, considering the success Titel and the theater have enjoyed with the same composer's "Cosi fan tutte" and "The Magic Flute."