The Soviet Union in early 20th century, a time of social and political upheaval, was also an artistic utopia, and saw the interplay of suprematism, constructivism and futurism — separate but connected art movements. 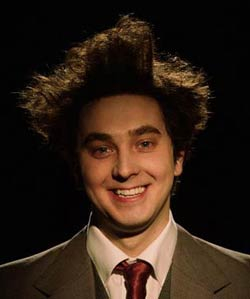 Collectively known as the Russian avant-garde, theater directors like Sergei Eisenstein, poets like Mayakovsky and designers such as Alexander Rodchenko, composers, architects and artists like Kandinsky, Malevich and Lizzitsky were just a few of the many who tried to pushed the boundaries of culture and its possibilities.

A new exhibition by Dutch theater director Saskia Boddeke and British filmmaker Peter Greenaway, "The Golden Age of the Russian Avant-Garde" dramatizes these characters and immerses viewers in the context of that period, exploring the lives and works of its key figures through the language of theater and cinema. Twelve pivotal figures from the period of 1910 to 1930, played by Russian actors, are used to tell the story of this period of cultural experimentation and innovation.

More than 1,000 artworks, sourced from galleries and private collections around the world, are displayed as part of the exhibit, but Greenaway and Boddeke add to that by showing the context in which these masterpieces were created, the exchange of ideas between artists and the debates that surrounded them, pieced together from memoirs, manifestos, newspaper articles, published works and personal artifacts.

The characters are shown on multi-screen projections fused with photos, film reels and film clips. They interact with each other, speaking and arguing across screens, and move from one screen to another. They are not presented in a fixed order, running in 15-minute loops, and one can move randomly from viewing one platform to another. 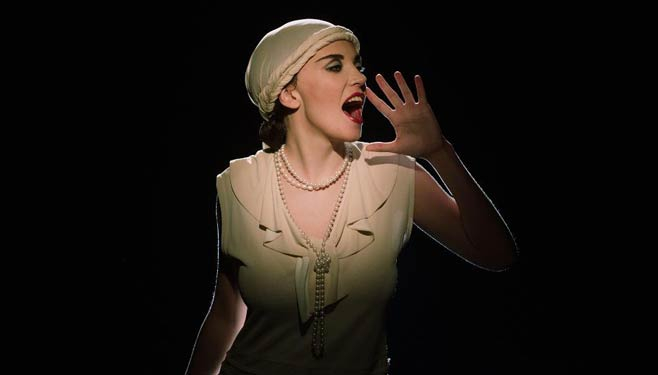 "You may be surprised by this exhibition. It is very subjective," Greenaway said at a news conference prior to its opening on Tuesday, adding that he hoped presenting the works this way would allow them to be viewed in a new light, and that other, previously hidden dimensions of well-known pieces, would be discovered.

Seventy-six-year-old Greenaway was formally trained as a painter but made a name for himself as a movie and documentary filmmaker. He has recently been using multimedia installations to explore the history of art, with his earlier projects focusing on baroque and renaissance painting. His collaboration on installations and theater projects with Boddeke now spans about 20 years.

Their new exhibit presents a completely new way of building and presenting an installation — specially created for the vast main hall of Manezh, it combines digital imagery, visual art, sound, theater and animation, shown on 12 large polyscreens mounted on three platforms, with six smaller screens flanking the walls of the 5,000-square-meter hall. 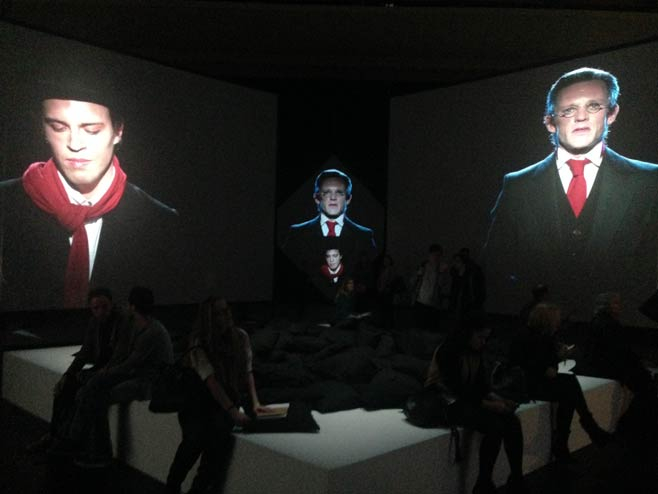 Visitors hang out in the dim hall amid projected historical characters.

"Cinema is dead … We need new ways of satisfying audiovisual demand," said Greenaway, who has constantly been pushing the boundaries of conventional filmmaking since he first started making movies in the 1960s. Indeed, the exhibition is an immersive experience, and the directors recommend that visitors spend at least  1 1/2 hours to take it all in. Marrying the language of art with the rhythms of modern life, the Russian avant-garde brought about an artistic revolution. With their exhibition, Greenaway and Boddeke have similarly moved this period of art history into the digital age.

"The Golden Age of the Russian Avant-Garde" (in Russian, no subtitles) takes place at the Manezh, 1 Manezh Square, until May 18.

Political unrest in Russia and contested elections in the U.S. are coming soon to a theater near you.
SPUTNIK V

From Skepticism to Relief: Why I Got the Russian Vaccine

“I sank into a strange, semi-feverish state.”
weekend kitchen

Jennifer Eremeeva gives us a recipe for the beloved meatballs found in every Russian freezer.
NIPPY DIP

Both believers and non-believers take the plunge.