KIEV — Ukraine's richest man has seized on the standoff between the Kiev authorities and pro-Russian separatists to help forge new political alliances following the overthrow of his former ally, President Viktor Yanukovych.

Steel and mining magnate Rinat Akhmetov is drawing on his local clout in Donetsk to negotiate with separatist protesters to end their occupation of state buildings in the eastern city, his industrial fiefdom where Yanukovych was once the governor.

Beginning last week, sources close to him say, Akhmetov has been actively involved in talking to the rebels — even sympathizing with some of their demands — while urging law-enforcement agencies to stay their hand in using force to end the standoff.

The move is not without its risks. If he miscues, those close to him say, he could be accused of toeing Moscow's line and will find himself at odds with Ukraine's new leaders. That might put in jeopardy the very businesses he aims to protect.

Commentators say the 47-year-old Akhmetov, whose fortune is estimated by Forbes magazine at $11.4 billion, is trying to use the crisis in eastern Ukraine to re-position himself and protect his huge business concerns in the post-Yanukovych landscape.

But equally, the new leadership needs him and his clout, especially in a region where much of Ukraine's population and industrial capacity are concentrated and whose ties to Russia make it crucial to relations with the Kremlin.

A local Donetsk boy, son of a miner from the ethnic Tatar minority, Akhmetov's business interests reach deep into traditional mining areas of the Russian-speaking Donbass region. He has about 300,000 people on his payroll.

That can translate into useful support for the new leaders in a part of the country where people are strongly influenced by Russian cross-border propaganda and look askance at the pro-Western Euromaidan uprising in Kiev that toppled Yanukovych.

Akhmetov emerged into the public consciousness out of bloody regional gang wars in the 1990s after the collapse of the Soviet Union as head of a private business empire that now reaches into steel, mining, energy and the media.

Soccer-crazy, he owns the FC Shakhtar club, its flying saucer-like stadium and star-studded multinational squad. Along with the kind of wealth that made headlines when he bought a $200-million London apartment, Shakhtar has brought him international celebrity. Yet despite sitting in parliament for several years, he is rarely spotted in public — at least, outside of a stadium. 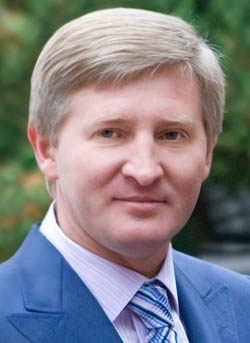 In Donetsk, a steel and mining hub with a population of one million, he has a stock of popular appeal, conducting himself often with the panache and patronage of a generous feudal lord.

He has been known to send sweets to Donetsk's schoolchildren on Valentine's Day or textbooks at the start of the school year.

Western governments also recognize him as a major player.

German Foreign Minister Frank-Walter Steinmeier flew to Donetsk to meet Akhmetov last month, calling him a man "whose word counts round here" and expressing confidence that he and other "oligarchs" were ready to resist any move by Russia to separate the Russian-speaking east as it did Crimea.

Akhmetov's System Capital Management, the corporate hub of his various businesses and holdings, has offices in the capital Kiev. He bought up and is re-fitting the old Soviet-era TsUM department store right by the Euromaidan protest area.

But his close identification with the deposed Yanukovych, whose election campaign he backed in 2009-10, means he is far from popular in the capital. He stayed well clear of protests during the three months of turmoil leading up to Yanukovych's flight to Russia, though he and fellow oligarchs did rush out appeals for restraint during the final, bloody denouement.

In his much-publicized contacts with pro-Russian activists who took over the regional administration building in Donetsk on Sunday, he has sympathized with their calls for upgrading the status of the Russian language in Ukraine and came out strongly against any use of force by authorities to end their sit-in.

If security forces stormed the building, he "would be with the people," news site Ukrainska Pravda reported.

At the same time he urged the separatists to tone down some of their demands, such as an independent "Donetsk Republic" and to hold constructive negotiations with the government.

He favors decentralization of power — along lines already being drawn up by the new leadership — but is at pains to differentiate this from Moscow's call for "federalism," which Kiev says would be a precursor to the breakup of the country.

Though he insists he backs only a united Ukraine, his aides acknowledge that he runs the risk of Russia's propaganda machine exploiting his sympathy for some of the separatists' demands, particularly on language rights.

"He is trying to achieve a solution in such a way that it will not be used for propaganda by Moscow," said a source close to Akhmetov.

He has stayed well clear of contacts with Yanukovych since the deposed leader fled to Russia in late February, aides said.

"He has not met Viktor Yanukovych, or any members of his family, since Feb. 22, when he spoke to him in Donetsk and encouraged him to resign," said Jock Mendoza-Wilson, director of international and investor relations at SCM.

His denunciation of the bloodshed in late February, when police opened fire and more than 100 people were killed, played a part in resolving the crisis. But he will have to work hard all the same to rid himself of the association with Yanukovych and forge new alliances. 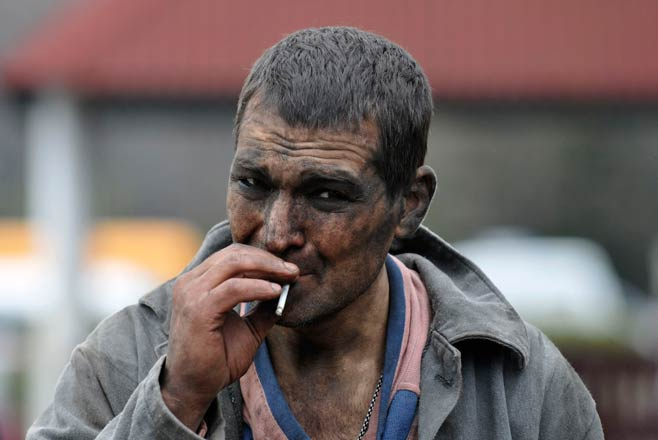 A worker at the Skochinsky mine near Donetsk taking a break on Friday.

Aides say his relations are good with Prime Minister Arseniy Yatsenyuk and boxer-turned-politician Vitaly Klitschko, who is likely to remain a political force even though he has bowed out of the presidential race.

In the run-up to a presidential election on May 25, however, commentators say Akhmetov's support for one or other of the political factions and leaders could become crucial.

The frontrunners in this race are the flamboyant former prime minister Yulia Tymoshenko and confectionery tycoon Petro Poroshenko. Akhmetov's relations with Tymoshenko have long been strained as the two belong to competing business clans. However, "they managed to coexist," said a source close to Akhmetov.

Some commentators say Akhmetov may choose to back an outside candidate, Mykhailo Dobkin, a former governor of the Kharkiv region who represents Yanukovych's now rudderless Party of Regions and is personally close to the Donetsk billionaire.

Akhmetov, however, may feel such an alliance could backfire on him as he studies his options for fostering a political environment that can secure his businesses and help them thrive.