President Vladimir Putin warned European leaders on Thursday that Russia would cut natural gas supplies to Ukraine if it did not pay its bills and said this could lead to a reduction of onward deliveries to Europe.

In a letter to the leaders of 18 countries, he demanded urgent talks with Europe on pulling Ukraine's economy out of crisis but made clear his patience was running out over Kiev's $2.2 billion gas debt to its former Soviet master.

His comments were Russia's most explicit threat to cut off gas to its neighbor, a move that could worsen a dispute over Moscow's annexation of Crimea that has resulted in the worst East-West crisis since the end of the Cold War in 1991.

"… Gazprom is compelled to switch over to advance payment for gas deliveries and in the event of further violation of the conditions of payment will completely or partially cease gas deliveries," Putin said in the letter, sent to European leaders including German Chancellor Angela Merkel, whose country is the largest consumer of Russian gas in the 28-nation European Union.

"Undoubtedly, this is an extreme measure. We fully realize that this increases the risk of [Ukraine] siphoning off natural gas passing through Ukraine's territory and heading to European consumers," Putin wrote in the letter, seen by Reuters.

Putin's warning to Ukraine came as Russia was suspended from the parliamentary assembly of European human rights watchdog the Council of Europe on Thursday, in protest at Moscow's behavior toward Ukraine and the annexation of Crimea.

The 18 Russian parliamentarians who were suspended will not be able to vote in the 318-head assembly, have representation in its main committees or take part in its election observation missions.

But the body, whose members come from 47 European states, stopped short of withdrawing their rights for good, arguing that would not help efforts to resolve the biggest crisis between the West and Russia since the fall of the Berlin Wall.

"The most powerful weapon of parliamentarians is dialogue," said Stefan Schennach, an Austrian Socialist who argued in favor of a limited suspension.

The Council of Europe is known for drawing up the European Convention on Human Rights, which entered into force in 1953 and established the European Court of Human Rights. It presses Europe's governments to uphold human rights and democracy, something many Western leaders warn is under threat due to Russia's recent moves in Ukraine. 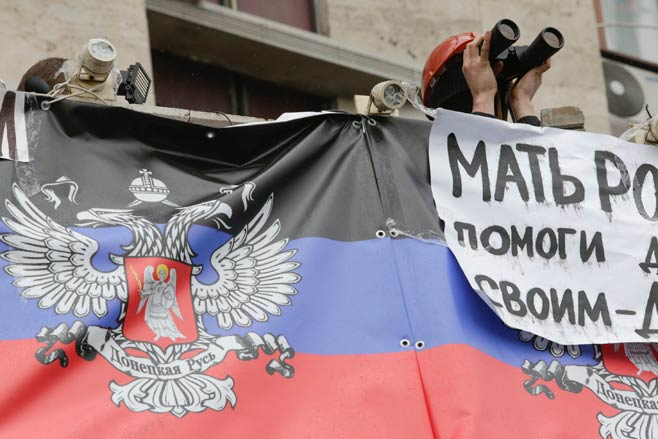 A pro-Russian protester looking through binoculars Thursday in Donestk.

The EU and the U.S. have responded to Russia's annexation of Crimea by imposing targeted visa bans and asset freezes against Russian and Ukrainian individuals.

But some commentators and analysts doubt Europe's readiness to follow through on threats to pursue punitive economic measures given the dependence of some EU countries, particularly those in Eastern Europe, on Russian gas and trade.

Russia meets 30 percent of Europe's natural gas demand and half of its gas transit to the EU goes through Ukraine.

State-controlled gas producer Gazprom stopped pumping gas to Ukraine during price disputes in the winters of 2005-06 and 2008-09, leading to reduced supplies in European countries that receive Russian gas via pipelines that cross Ukraine.

Kiev failed to meet a deadline on Monday to pay for its March gas supplies. Putin discussed how to respond with his government on Wednesday but opted to hold talks with Europe before pressing ahead with any new punitive action.

"We must lose no time in beginning to coordinate concrete steps. It is toward this end that we appeal to our European partners," Putin wrote.

He said Ukraine's economic crisis was partly caused by unbalanced trade with the EU.

"It goes without saying that Russia is prepared to participate in the effort to stabilize and restore Ukraine's economy. However, not in a unilateral way, but on equal conditions with our European partners," Putin wrote.

Russia has nearly doubled the price it charges Ukraine for gas since the ouster in February of President Viktor Yanukovych, who had pleased Putin by spurning landmark trade and political deals with the EU in favor of closer Russia ties.

The Russian leader hasn't commented publicly on the Ukraine crisis in over a month.
'DEFEND OUR LAND'

Belarus Strongman Says Will Go to War if Russia Attacked

Belarus and Russia are set to hold military drills that will focus on a scenario in which Belarus is forced to resist an attack from the West.