It was winter, then spring and now winter again … all I can say is, the Clash of the Titans continues in Moscow, ladies and gents. But don't despair — even though the seasonal rollercoaster is a bit of a pain, we can and will get through it. All we have to do is stay positive, look forward to the May public holidays and, to quote Aerosmith, let the music do the talking. There are, as always, plenty of great gigs lined up for the weekend, so let's take a look at who is in town.

Friday, April 4, is the day James Blunt fans have been waiting for, as this talented British crooner will finally be in Moscow. He rose to fame back in 2004 with his song "You're Beautiful" and has since recorded four albums, performed in a Boeing at 30,000 feet and generally rocked. James is currently on tour, supporting his latest album called "Moon Landing," which came out last year. The very first single off the album, called "Bonfire Heart," reached the No. 1 position on charts all over the world and was certified double platinum. And here is a bit of fan trivia: When I spoke to James in October 2013, he told me the 'making of' story of the video for "Bonfire Heart." Apparently, the crew was in the U.S., driving around and happened upon a bar where a wedding reception was taking place. Blunt and his team were invited to join the wedding party, and that became the "Bonfire Heart" video. So go watch it, feel the love and go get those tickets. They are not going to be available for long. James Blunt takes to the stage at Ray Just Arena on Friday at 8 p.m., so bring your date and don't be late!

Moscow clubbers will be happy to know that their Saturday is full of potential, as usual. There is hip-hop and drum 'n' bass courtesy of DJs Gameface from Britain and Snavs of Denmark at the Moskva concert hall; there is Markus Popp and his world-famous IDM project called Oval, who will be taking over Solyanka and glitching all night long; and Pravda Club is hosting DJs Sian from Spain and Kaiserdisco from Germany for a great techno and house party. 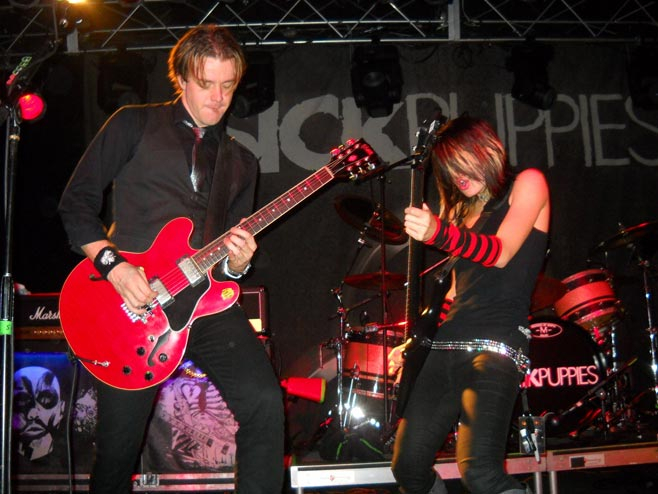 Legendary Australian hard rock band Sick Puppies know how to raise the roof and will play Sunday in Moscow.

But if you are looking for something different, then my suggestion is some good old Russian rock 'n' roll. Bravo is one of the oldest and most prominent Russian bands that rose to prominence back in the 1980s, drawing inspiration from Western music of the '50s. During their 30 years in the business, Bravo released 15 studio albums and tickets for their live shows usually sell out like hotcakes. The line-up has changed over the years, with original vocalist Zhanna Aguzarova leaving the band in 1988, but they remain very popular — especially if you have a soft spot for rock 'n' roll, swing and rockabilly. Bravo will be taking to the stage at GlavClub at 8 p.m. on Saturday, April 5. Remember, music is a universal language, so don't worry if you do not speak Russian: Just go, enjoy the show and dance!

That just leaves Sunday, and this is going to be a day for all the hard rock fans out there because Sick Puppies are in town! If you are freaking out and thinking about dogs and epidemics right now, don't — this is just the name of an Australian hard rock band that knows how to raise the roof and put on a great show. Sick Puppies formed back in 1997, and originally planned on doing covers of their favorite bands, like Rage Against the Machine and Green Day. But pretty soon they realized their original songs were just as good.

Their star started to really shine after a song of theirs called "All The Same," was uploaded to YouTube and used in the Australian Free Hugs campaign. To this day, the video has more than 70 million views, and the band has just released their fourth studio album, called "Connect." This is the Puppies' first ever visit to Russia, so don't miss your chance to go and see them play. The concert starts at 8 p.m. on Sunday at Volta Club.

And this is yet another Moscow weekend — it may be cold outside, but all this live music will hopefully keep you warm. Have a good one!