Manifesta, a roving biennial of contemporary art whose 10th iteration is schedule to be held at the State Hermitage Museum in St. Petersburg between June 28 and Oct. 31, has come in for criticism for declining to take Russia's involvement in the Ukrainian crisis and its annexation of Crimea into account.

The event, which is scheduled as part of the Hermitage's 250th anniversary exhibitions and festivities, has been lavishly co-funded by the city in addition to receiving funding from the European Union, the Netherlands' Ministry of Education, Culture and Science, the Netherlands Foundation for Visual Arts, Design and Architecture and the Mondriaan Foundation.

Already coming under fire over Russia's adoption of anti-gay "propaganda" legislation, a Ukrainian artist has now urged international artists to boycott Manifesta over Russia's annexation of Crimea, while a group of Western European artists launched a petition demanding the biennial be suspended. A local art group has withdrawn from the event to hold its own pro-Ukrainian art festival.

Meanwhile, City Hall plans to use Manifesta to improve the international image of both St. Petersburg and Russia.

"Manifesta 10 is one of the main events of the Year of Culture in Russia," Deputy Governor Vasily Kichedzhi was quoted as saying on City Hall's website on Feb. 12. "Taking into account the ­international reputation of Manifesta and the interest in the event from both professionals and the general public, we believe that successful implementation of the project will contribute to strengthening the positive image not only of St. Petersburg, but of Russia as a whole."

Although Manifesta has claimed that the Hermitage and City Hall acknowledge its "artistic autonomy," doubts have been expressed over how free the organizers are to mount the exhibition of their choosing in a country where a number of media outlets have been stifled and closed for criticism of the authorities.

On March 3, Germany-based Ukrainian artist Yury Leiderman released a statement asking the international art community to boycott the biennial in support of the people of Ukraine.

Leiderman, one of the Moscow Conceptualists of the 1970s and 1980s was born in Odessa, Ukraine and resides in Berlin, Germany. He took part in the first Manifesta, which was held in Rotterdam, the Netherlands in 1996.

"Dear friends! I appeal to you as an artist, a participant of first Manifesta European Biennial of Contemporary Art (1996, Rotterdam) and as a native of Ukraine," he wrote in a statement published on the Art Ukraine website.

"My country has experienced cynical brazen military aggression from Putin's regime of Russia. Nevertheless there was initially a mistaken decision to host Manifesta 10 in a country where freedom of artistic expression is repressed and where imperial chauvinism and obscurantism are nurtured by state ideology," Leiderman wrote, calling on participants to boycott Manifesta

On March 4, a group of artists from Amsterdam and Dusseldorf published a petition urging the postponement of Manifesta in St. Petersburg until Russian troops are withdrawn from Ukraine, which was signed by 1,754 people as of March 22. The supporters included Marta Kuzma, a co-curator of Manifesta 5, which was held in San Sebastian, Spain in 2004.

Maria Alyokhina, Pussy Riot's member who spent nearly two years in prison for an anti-Putin performance, proposed that Manifesta should be held in Ukraine, rather than in Russia.

"The people who have courage and honor to stand for its freedom and victory should see all the festivals of the world in its country. I call for a boycott of holding Manifesta in Russia. Because of troops. Because of tortures and violence in the name of law. Because of the lack of freedom," Alyokhina was quoted as saying on the Kievreport.com website on March 9. 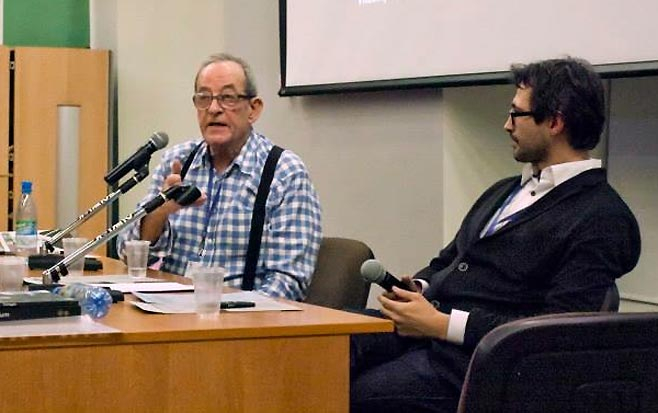 A week after Leiderman made his statement and a petition was launched, the organizers of Manifesta dismissed calls to suspend the event and have refused to relocate the biennial despite Russia's actions in Ukraine having been condemned by the European Union. In a statement dated March 11, the organizers said that "canceling the project plays directly into the current escalation of the 'Cold War' rhetoric and fails to acknowledge the complexity of these geo-politics."

Kasper König, the curator of Manifesta 10, added a personal statement which said that neither he, the Hermitage director Mikhail Piotrovsky, nor the Manifesta Foundation and its director Hedwig Fijen were responsible for Russia's political and military action.

König added that more than 43 artists have agreed to take part in Manifesta after reading the biennial's notice to potential participants that described the current political circumstances as "delicate and unpleasant" and said his contract guaranteed artistic freedom, but "within Russian law." It also warned against "cheap provocations."

"The environment and the possibilities for this exhibition are very rich and it would be a mistake to reduce our possibilities down to the level of just making a particular political statement," the notice to the artists concluded.

At the end of his statement, König warned against those whom he called "political actors."

"We are all aware that this 10th edition of Manifesta could be misused by political actors as a platform for their own self-righteous representation," he wrote.

Following König's statement, the St. Petersburg art collective Chto Delat announced it was pulling out of Manifesta. In a statement on March 15, the group accused Manifesta of pre-emptive censorship.

"It is clearly art over politics. Kaspar König's most recent statement denigrates any attempts to address the present situation in Russia by artistic means, demoting them to 'self-righteous representation' and 'cheap provocation' and thus effectively pre-emptively censoring them," Chto Delat said.

Having withdrawn from Manifesta, Chto Delat said it would work toward a new project, a solidarity exhibition of Ukrainian and Russian artists, intellectuals and cultural figures. "At this terrible moment in our society's history, we are ready to demonstrate our unity and the possibility of taking action against the war together, rising above the flood of hate, lies, manipulation and direct violence, and not above politics," it said.

This is not the first time that the Manifesta biennial has faced opposition to a proposed location. In 2006, an event due to be held in Cyprus was cancelled three months before the opening and moved to Berlin after opposition from Cypriot artists.