Whether you get your news from Vedomosti, Gazeta.ru or The Moscow Times, you'll likely find one thing in common: the unmistakable political cartoons of Sergei Elkin.

With bold, eye-pleasing strokes, Elkin's cartoons satirize Russian political realities in a way that is largely unmatched by his Russian peers. A drawing of President Vladimir Putin holding the Olympic rings like brass knuckles so impressed U.S. television network NBC a few weeks ago that it dispatched a two-man crew to The Moscow Times' newsroom to film a segment for its "NBC Nightly News," the most-watched evening news program in the U.S.

Cartoonist Sergei Elkin talks to The Moscow Times about his work as a cartoonist and how to draw Vladimir Putin.

Elkin, however, did not set out to be a cartoonist. The Moscow-based artist first entered journalism in the 1990s as an editor at a newspaper in Voronezh, located about 500 kilometers south of Moscow. When the newspaper ran short of content to fill its pages, Elkin tried his hand at drawing political cartoons.

"We didn't have a caricaturist," he said. "We just had a newspaper, and we needed something to fill it."

He quickly discovered that he enjoyed drawing more than editing.

Elkin, 52, did not come to be a cartoonist entirely by chance. As a child, he studied at a special school for the arts, and learned to draw from a young age. When he began to draw political subjects, he extensively studied the work of other cartoonists, both Western and Russian, and said he was particularly influenced by the work of Mikhail Zlatkovsky and Viktor Bogorad, who has drawn for the opinion pages of The Moscow Times for about two decades. 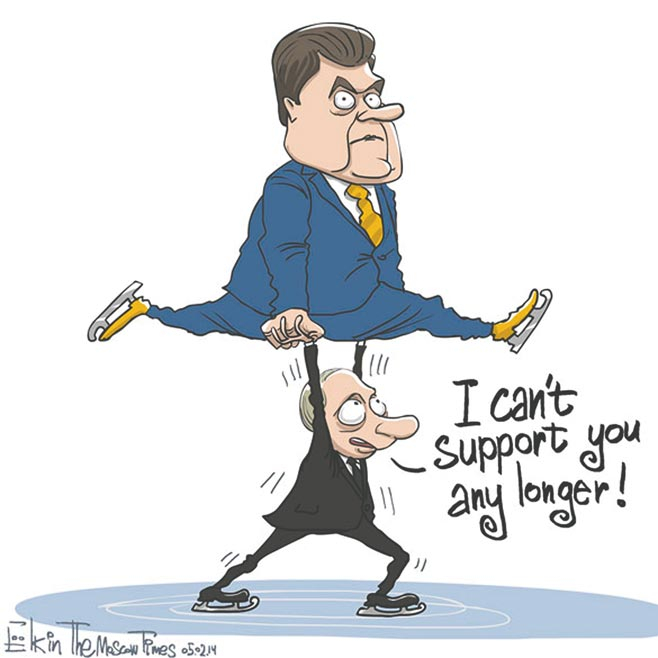 Following the Russian financial crisis of 1998, Elkin began to draw more and more political subjects, and he found himself rapidly gaining fans, laying the foundation for his present popular series of cartoons "Putin's Russia" for The Moscow Times.

Like many cartoonists today, Elkin's drawing is much more high-tech than the classic cartoonists that he looks up to. His work is done entirely on a computer with the help of a special computerized drawing pad, which allows him to produce work much faster than he had done previously. "Where I used to produce two or three cartoons per day, now if I try I can do seven," Elkin said.

This digital format seems fitting, as many of Elkin's clients are in fact websites — while political cartoons are often thought of as the domain of daily newspapers, the majority of orders now come from the Internet, with significantly fewer commissions from newspapers and the odd job for television. 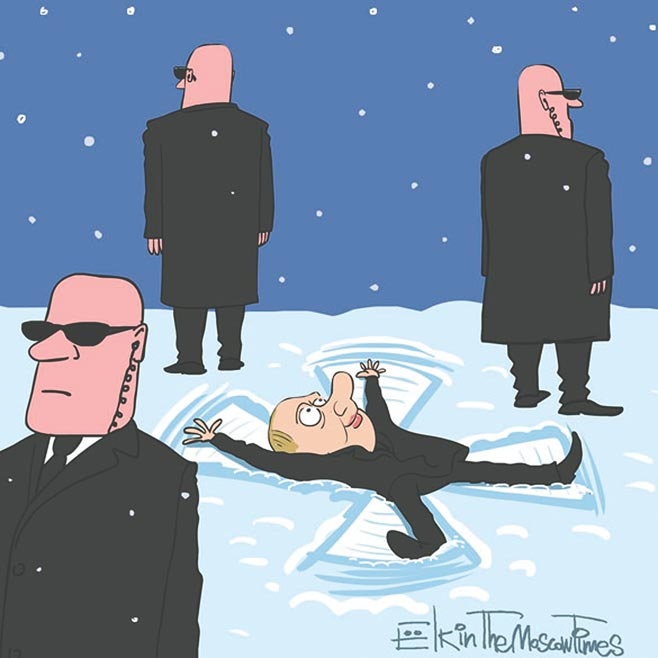 Despite his occasionally harsh commentary on the Russian government, Elkin said he has no fear of censorship. "Personally, I have never had any problems with the government," he said. "As for the media, sometimes when I draw something particularly critical, editors have refused to print it. They feared the consequences."

Elkin said the cartoons generally reflected his own personal opinions on politics, which are as cynical in person as they appear on paper. However, he added that he did also create special work when asked to draw about a particular subject, such as articles for The Moscow Times' opinion pages.

His most frequent subject is Putin, whose face he has drawn to the point of boredom. "Sometimes I just tell myself, 'OK, that is enough, I am not drawing this guy again for a week," Elkin said. "But then people tell me 'send us more!'" 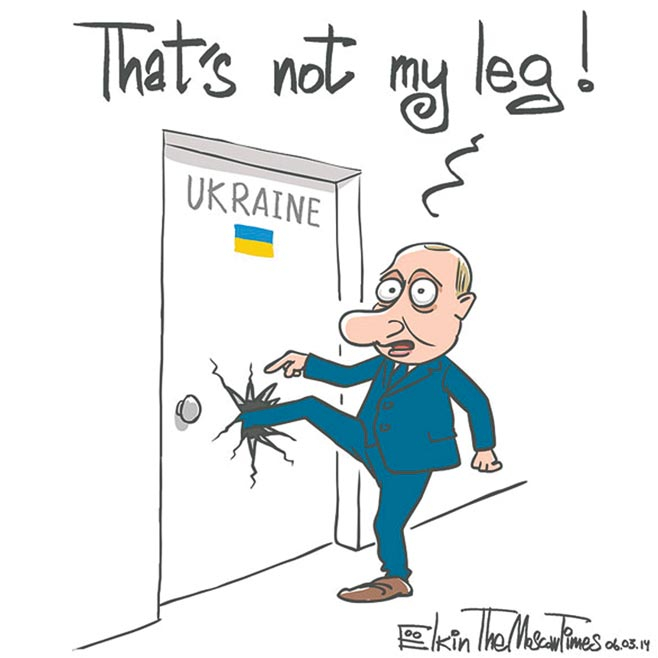 Elkin considers Putin's visual appearance to stand out due to his capacity to withhold emotion. "You need to portray this man who has studied judo … who has encountered Japanese philosophy — his face should reflect no emotions," Elkin said. "You need to show a man with an upstanding appearance and expression, who at the same time is internally prepared for all kinds of serious, harsh measures."

Previously apathetic toward politics, Elkin said his work had made him think much more about world events, and forced him to try to find humor in serious and divisive issues. "It is difficult … you need to find something that will not make fun of people's feelings," Elkin said.

However, Elkin's cartoons continue to grow in popularity, and he said he had no plan to change his activities. "When they shut down the Internet, then I'll have to find a new job," he said.