Vladimir Ovcharenko's "Vladey" auction house, widely heralded as a rare bright spot in the bleak commercial landscape for contemporary art in Russia, sold 57 percent of the 92 lots at their spring sale on Tuesday for a total of more than 1.2 million euros ($1.67 million).

While the proceeds from the latest auction were roughly the same as their previous two, the number of works sold declined noticeably — 70 percent of the lots were sold at their fall auction. Similarly, the works sold tended to go for prices at the bottom of the expected range, or even lower, whereas previous auctions saw buyers bid prices up to well above expectations.

More than a third of total sales came from the auction of a single work — Ilya and Emilia Kabakov's fifth painting from their 2004 series "Under the Snow." The painting sold for 540,000 euros, or 450,000 euros at the hammer price.

Founded in early 2013 by Vladimir Ovcharenko, owner of the Regina Gallery in the Winzavod Center for Contemporary Art, Vladey is the only Russian platform for auctioning contemporary art and specializes in relatively inexpensive works that usually sell for less than 20,000 euros. While many in the Moscow art world doubted the commercial viability of the project, its first two auctions garnered both respectable profits and significant media attention. 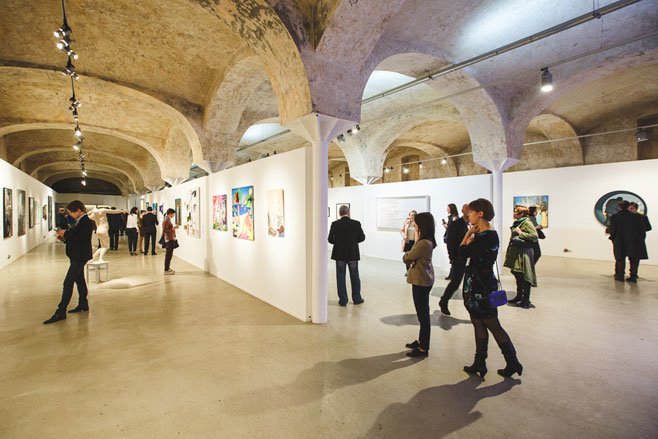 The Vladey auction was held at the Winzavod Center for Contemporary Art.

Ovcharenko preferred to put the fluctuating results down to fickle buyers and the selection of paintings rather than any shift in the market. "Well, there is always a risk — honestly, we never had any kind of plan of how much we should sell, what kinds of prices we should get," Ovcharenko told The Moscow Times.

Ovcharenko said he first got the idea to organize auctions of contemporary Russian art after helping to put together a charity auction to raise money for victims of the flood in Krymsk in 2012. The  charity auction's success led Ovcharenko to reconsider commonly held stereotypes about the difficulties of selling art in Russia, and he concluded that small-scale auctions might well be commercially viable.

"We could see that there clearly were art lovers — maybe not as many as in New York, but all the same they were there," Ovcharenko said, adding that both long-time collectors and amateur art aficionados were patrons of Vladey auctions.

Vladey's first auction, held in spring 2013 at Red October Gallery, brought in more than half a million euros and sold more than 75 percent of the lots. Since then, auctions have added some pricier lots like the work by the Kabakovs, but have kept their focus on more affordable works selling for just a few thousand euros.

While many of the artists that appear most frequently amongst Vladey's lots are long-time collaborators with Ovcharenko's Regina Gallery, each auction has had a wide variety of new and varied artists. 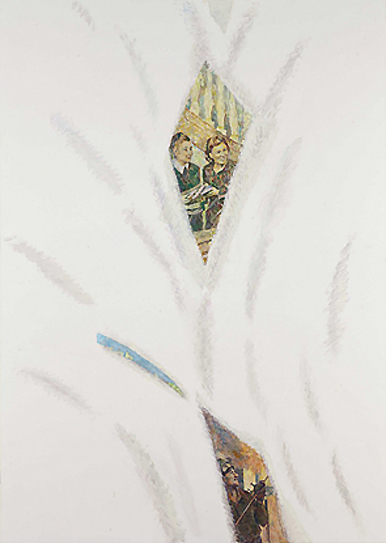 "The idea is to find either some new works, something unexpected from an artist … or old works that people have not seen before, so people will ask 'where did you find that?'" Ovcharenko said. "It is our task to select masterpieces, and others come and check them out and try to give them a value."

The name "Vladey" reflects both this philosophy and Vladimir Ovcharenko's first name. The word "Vladey" in Russian is the imperative form of the verb "to own," echoing Ovcharenko's idea of viewers placing a value on the selected works.

A few works stood out as crowd favorites in the latest auction — Konstantin Zvezdochyotov's work "Mama and Homeland — Most Important" sold for roughly double the suggested range at a hammer price of 56,000 euros. Bidding was similarly contested for Anatoly Zverev's 1983 painting "Untitled," which sold for a hammer price of 15,000 euros. On the other end of the scale, none of the four lots from artist Nikolai Bakharev were sold.

Ovcharenko said he was interested in expanding Vladey into "more than just a company that holds auctions twice a year," adding that he wanted Vladey to be a year-round enterprise working with contemporary art, and that a major step in this expansion would be increasing Vladey's Internet presence.