The European Union and the U.S. on Monday imposed travel bans and asset freezes on more than a dozen Russian and Crimean officials involved in staging the referendum on Crimea’s independence from Ukraine, which the West deemed illegal.

The sanctions are the most visible sign yet of Western anger at Russia's attempt to absorb the Crimea region, reflecting the deepest plunge in Russia's relations with the U.S. and Western Europe since the Cold War.

But many commentators immediately said that the measures — which targeted senior officials including Deputy Prime Minister Dmitry Rogozin, Federation Council speaker Valentina Matviyenko, and longtime Kremlin aide Vladislav Surkov — would not deter the Kremlin from reversing course in Ukraine.

Some pro-Kremlin pundits said the sanctions could even have the opposite of the intended effect, saying they would help fight corruption by officials who are banned by law from having assets abroad and that broader trade sanctions, if imposed, could stimulate economic reforms in Russia.

In the Crimean referendum, which took place Sunday, just under 97 percent of voters decided the region should secede from Ukraine and join Russia, according to the local authorities. President Vladimir Putin will address a joint session of Russia's parliament regarding Crimea on Tuesday, when it is possible the secession will be formalized.

During a White House press briefing Monday morning, U.S. President Barack Obama warned that continued Russian military intervention in Ukraine would only increase Russia's isolation and exact a greater toll on its economy.

"If Russia continues to interfere in Ukraine, we stand ready to impose further sanctions," he said.

Amid fears that Russia might move into eastern Ukraine, Obama said further provocations would achieve nothing except to "further isolate Russia and diminish its place in the world."

Obama said he would travel to Europe next week and that Vice President Joe Biden was headed on Monday to Poland and Lithuania to reassure U.S. allies in the region. "Our message will be clear, as NATO allies we have a solemn commitment to our collective defense and we will uphold this commitment," Obama said.

The Council of Foreign Ministers of the European Union, meeting in Brussels, introduced travel restrictions and assets freeze against 21 officials from Ukraine and Russia, and more European Council measures would follow in a few days, Lithuanian Foreign Minister Linas Linkevicius said on Twitter.

The council targeted "persons responsible for actions which undermine or threaten the territorial integrity, sovereignty and independence of Ukraine, including actions on the future status of any part of the territory which are contrary to the Ukrainian Constitution and persons, and entities associated with them," the council said in a statement on its website.

The officials punished by the European Council were not publicly identified. It was expected that the list would be released later Monday, when the sanctions were officially to take effect. 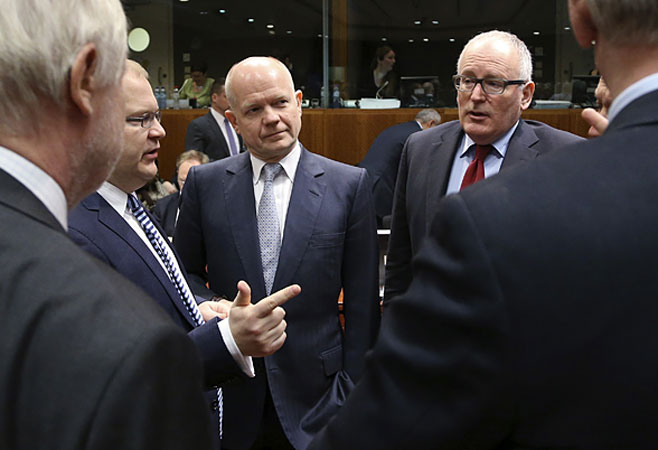 The foreign ministers of Estonia, Britain and the Netherlands in Brussels.

It was not immediately clear which officials, if any, were on both the European and U.S. lists.

Two Russian foreign relations experts dismissed the damage from the sanctions for Russia, saying that on the contrary they would prevent Russian officials from violating the law that forbids them from having bank accounts outside Russia.

Igor Morozov, a member of the Federation Council's International Affairs Committee, and Boris Shmelyov, a senior foreign policy expert at the Institute of Economics of the Russian Academy of Sciences, both pointed out an expected anti-graft effect of the foreign assets freeze of Russian officials.

As for the effect of the entry bans for Russian officials on Russia itself, the measures "affect the interests of certain officials but state interests are not infringed upon," Shmelyov said.

"Of course, contacts will be hindered but … other diplomatic channels will be found," he said.

Possible trade sanctions against Russia would "have a painful impact on the Russian economy and on the social standing of separate citizens" but "in a certain sense, these sanctions may even be useful to Russia as it is a big and passive country and reforms often happen after a kick in the rear," Shmelyov said.

Not everyone had such a rosy view of the consequences of sanctions. "People are most afraid of sanctions. Their volume and … what sanctions there will be and how this will be reflected on the Russian financial system, the economy, the markets and the largest companies," said Konstantin Chernyshev, head of research at UralSib in Moscow.

Many economists expect Russia to enter recession and most have rushed to slash their growth forecasts as a result of the worst showdown between Russia and the West since the fall of the Berlin Wall.

Morozov said that trade sanctions, if imposed, would "primarily harm Western states because Russia is developing fast and would redirect its activity toward Asia, including China and India," he said by phone from Crimea's regional capital Simferopol, where he observed the referendum Sunday.

Morozov also noted that more than 5,000 medium and large European businesses were based in Russia and it would be "counterproductive to apply sanctions against their own enterprises," he said.

"If you look at the ruble's evolution, Russia's isolation at the United Nations Security Council and the fact that Russia is criticized by its own partners like Kazakhstan, Belarus and Armenia, you will understand this and see that Russia instills fear," Asselborn said, Interfax reported. "And when someone instills fear, investments drop and the economy suffers from it."