If you are really thirsty for audacious humor, the Moscow Irish Comedy Fest, or MIC Fest, is for you. This Saturday, prominent Irish stand-up comedian Dara O'Briain will perform for the first time in Russia as part of an annual comedy festival aimed at encouraging Russia's fledgling stand-up comedy community.

Stand-up is usually defined as a performance by one comedian without a so-called "fourth wall" separating the artist from the audience, with both parties often feeding off each other. But most important for a stand-up comedian is to understand the reason he is standing on the stage: He doesn't make jokes just for fun, but rather to express his own ideas. While widespread in the West, this form of comedy has appeared in Russia only in the last few decades, and has been slow in gaining a widespread following.

"A joke is a medium to transmit your thoughts. For example, religion. You cannot talk badly about religion in a serious way. But as a joke, it is OK, and nobody gets hurt," Russian stand-up comedian Anton Borisov told The Moscow Times.

The organizer of the MIC Fest is "Stand-Up Original", a company founded about two years ago by a pair of Russian comedians, Igor Meerson and Anton Borisov. The company's aim is to bring prominent stand-up comedians from different countries to Russia.

Meerson is aware that importing comedy is a risky business because of cross-cultural boundaries and the limited number of Russians who understand English, but he is confident that younger generations are much more interested in Western humor. Moreover, it is important for Russian comedians to watch how international professionals perform to improve their own skills.

With events like MIC Fest, Stand-Up Original is working hard to create a base audience that is interested in foreign comedians. This is the second time MIC Fest has been held in Russia, and Stand-Up Comic has plans to bring many more interesting comedians from the West. 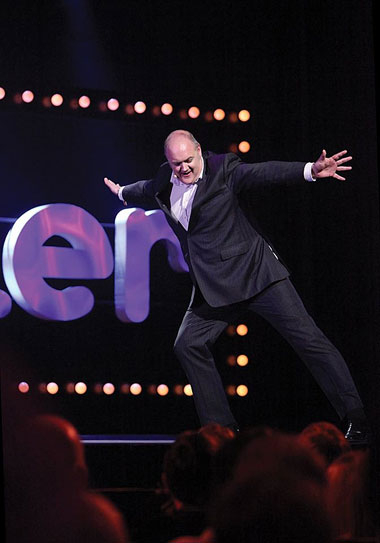 As Stand-Up Original already has a good reputation, it proved fairly easy to convince O'Briain to perform in Russia. The company has previously organized several appearances by Irish comedian Dylan Moran in Russia and Kazakhstan, and Meerson and Borisov are pretty sure that Irish and Russians have lots in common. Both nations like to drink, and Irish humor is very close to the Russian mentality: Irish and Russian people are both prone to pessimism and dark humor.

However, the Russian audience is unique many ways: It is really hard to make them laugh, Meerson says. In the U.S., for example, people are much more open and ready to have fun. Russians tend to applaud rather than laugh out loud.

Meerson says that stand-up has been done by Russian comedians for many years already. He considers Mikhail Zadornov to be the first real stand-up comedian in Russia, adding that the work by Soviet comedian Yan Arlazorov and writer Yevgeny Grishkovets were similar to stand-up too.

Meerson recalls that he was inspired by Grishkovets' pieces and started working as a stand-up comedian about 10 years ago in St. Petersburg. "Our audience were students, we were interested in problems of the younger generation. So we gathered in inexpensive bars, drank inexpensive beer and listened to inexpensive comedians," Meerson said.

Meerson does not want people to compare stand-ups with Soviet comedy television programs like "Anshlag" and others. Soviet comics like Yevgeny Petrosyan did not write jokes on their own, and moreover they frequently resorted to props, costumes and slapstick humor. A stand-up comedian talks about problems he really cares about and want to share what he thinks, that is why stand-up is regarded as the purest form of comedy.

Becoming a stand-up comedian requires a significant investment of time for writing and thinking up new material. Special open-mics allow newcomers to test out their skills, giving all participants two minutes to tell the world what they think and make people laugh.