For much of last week, the events in Crimea and Ukraine were at the foreground of the British media. However, amongst the acres of newsprint and online newspaper blogs which were devoted to reporting and analysing the subject, elements of satire reared their head.

It was only to be expected that The Sun, Britain's best selling tabloid — noted for its sense of humour and a fish and chips-type of patriotism — would be in the vanguard.  On March 3 it published a full page picture of a bare-chested Vladimir Putin on the cover with a sardonic headline rephrasing an old football chant: "Come 'n have a go if EU think you're hard enough." This was a reference to Putin's image as the Iron Man of Russia standing up to the West, notably the European Union.

Meanwhile the veteran satirical magazine Private Eye devoted the cover of their March 7 issue to Putin and the Winter Olympics: "Winter Paramilitary Games Begin," said the headline, with Putin saying "I think Russia is going to win the shooting."

At the more serious end of the journalistic spectrum, The Economist's March 8 issue struck a much more ominous note with a cover showing the eyes of Putin superimposed over a map of Ukraine and the headline: "Kidnapped by the Kremlin."

The Ukraine crisis came at the same time as the Academy Awards, which is always a big event in the British media, so it was not surprising that the political cartoonists sought one to inspire the other. British director Steve McQueen's "12 Years a Slave" won Best Picture on March 2. Two days later, The Times ran a cartoon depicting again a bare-chested Putin with machine gun over his shoulder pulling a chained Ukraine, with the caption: "12 Thousand Years a Slav." Elsewhere a cartoon in The Daily Telegraph pastiched the much-tweeted selfie taken by Ellen Degeneres and nominees during the ceremony and replaced the celebrities with Putin and a concerned-looking Obama, Merkel, Cameron and Hollande.

Meanwhile, Prime Minister Cameron posted on Twitter a photo of himself looking serious while on the phone to the U.S. president with the tweet: "I've been speaking to @BarackObama about the situation in Ukraine. We are united in condemnation of Russia's actions." 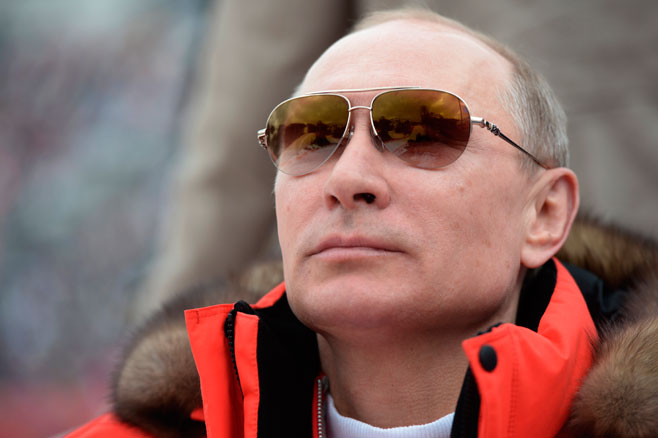 The actor Sir Patrick Stewart, a supporter of the opposition Labour Party, immediately parodied this by tweeting a photo of himself with a packet of Wet Ones wipes held to his ear.

Perhaps the wittiest comment on the crisis came from Peter Oborne, possibly Britain's best political columnist, making the pithy point in his piece for The Daily Telegraph that Britain has at least two foreign policies. Whilst the British Foreign Secretary William Hague has developed a fine line in liberal rhetoric, he was reinforcing it with a pointless gesture: "His trip to Kiev last week was the most meaningless visit to a foreign capital since Sir Alec Douglas-Home flew to Reykjavik at the height of the Cod War" observed Oborne, referring to a long-forgotten dispute from the 1970s between Britain and Iceland over fishing.

A cartoon in The Guardian entitled "Gamesmanship" wondered if the British government was too cautious in their response because they were afraid of losing the large amounts of Russian wealth now parked in London. It depicted an intimidated-looking Cameron at a Monopoly board — renamed Oligarch — with various Russian assets in the capital represented on the board, notably Mayfair — the most expensive district in the British Monopoly — filled with houses.

The caricature of Russia in the media is now of a bare-chested Putin, but it used to be the Russian bear and this goes back to the Crimean War of 1853 to 1856. That conflict between British and Russian armies has also been evoked in the coverage. This is remembered nowadays for the Charge of the Light Brigade, Florence Nightingale and the battle of Balaclava giving its name to the balaclava. Simon Edge in the Daily Express reminded readers: "The first Crimean War, as we may soon start calling it, left its mark on our language and culture, on our health policy, thanks to pioneering nurses Florence Nightingale and Mary Seacole, and the conduct of the media, on the street names of our Victorian towns and cities, and even the way we dress."

The Daily Telegraph's website took a look back in history at Roger Fenton's seminal photography during the Crimean War — the birth of war photography. Fenton's black-and-white pictures brought the Crimean battles to life for the public back in Britain, depicting the grim life for soldiers and nurses in the campaign.  It is certainly a far cry from today's events in the Crimea being played out on rolling 24-hour news channels across the world.