The Turetsky Choir will celebrate its 14th birthday this year, yet the singers in the group have known each other for  20 years, since they first turned their trained operatic voices to the creation of pop music.

By now, it is clear that choir's experiment of turning classical vocals to pop has been successful, as the group's popularity demonstrates. The Moscow Times spoke to Mikhail Turetsky, long-time leader of the eponymous choir, who discussed the reasons for his group's unexpected success.

Turetsky insists that in the Soviet times, singers with bad voices or no voices at all simply were not admitted to perform on the stage. For him, Iosif Kobzon is a paradigm, both of a singer and a human being. "I want to be like him, and everyone in the Russian scene wants to be like him," he confessed openly. Turetsky also pointed to Muslim Magomayev and Yury Gulyayev as examples of singers who were able to sing opera pieces with the same charm as pop music songs.

Turetsky eagerly stressed that his choir was an art group and that he was first in the history of Russian and world show business to teach choic singers not only to blindly follow the instructions of the conductor but to actively move around the stage and dance during the performances. The choir conductor stopped turning his back to the audience and became a mediator between singers and listeners. The repertoire of the choir was not limited to opera pieces, but also included rock, pop music, pieces from famous musicals, coupled with impressive light effects and dramatic composition.

Turetsky has been interested in an eclectic mix of music since the age of 15. He feels that one's musical palette must be varied in order to attract a mass audience. In rock, he was influenced by Pink Floyd, Led Zeppelin, Creedence Clearwater Revival and The Beatles. In 1990, he found himself at the premiere of "The Phantom of the Opera" on Broadway, when no one heard about the broadway musical genre in Russia yet. It was very unusual that the opera singers were not fat, could dance and could work in diverse genres.

In 1985, Mikhail Turetsky organized his first music group, "Voice," with five musicians and six singers. It was a creative experiment, sometimes very naive and a bit amateur, but nevertheless the group was popular and was invited to perform in Estonia, Latvia and Ukraine.

Later, Mikhail met Yury Sherling, the famous Russian theater director, who also was interested in gathering classical ballet, opera and pop artists in one show. The two were experimenting and discussing their ideas openly. 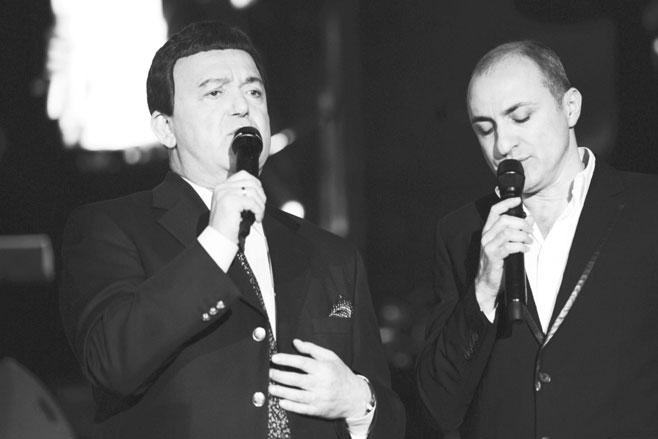 "Look, what do you think about this female opera singer," Yury Sherling used to ask. "I think that she must either lose 20 kilograms, or gain another 40. Because right now she lacks individuality," Mikhail would reply. It was an attempt to find the image for every artist and think about what was the message to people from them. Yury Sherling and Mikhail Turetsky were innovators in their field in the late 1980s.

Mikhail himself has learned quite a lot since he was 19. His education was at the best Russian music and vocal institutions, like the Svechnikov and Gnesin Academies. He is a classically educated musician with a M.A., B.A. and Ph.D. degrees in choir conducting.

The choir started with Jewish spiritual music in 1987, but quite soon it became obvious that the singers were too ambitious to sing only folk music. Turetsky started expanding the repertoire quite successfully and the choir in its present form came to be in 2000. The singers mastered the art of touring around the U.S. after acquiring contracts there, further expanding their audience.

The Turetsky Choir has expanded greatly since their early days, now consisting of 60 staff, including 10 vocalists, four musicians and various technicians and creative assistants. The Turetsky Choir uses a complicated vocal and music technique, though they are no doubt pop stars. However, the roup cannot be called a candy for listeners with primitive demands. Even performing "Murka," Russian chanson song, they are arranging it masterfully, making a good music product understandable by people without higher education.

The Turetsky Choir is most popular with women aged 35 and above. Mikhail Turetsky is in no way a dominating macho, and admits the importance and significance of the role of women in the development of Russian society throughout the country's tragic history. "I realize that the most difficult job is performed by men, anyway, but female employees in my music business, for example, are more responsible, reliable and scrupulous," he says.

Touring around Russia, often in bad road conditions, is one of the least pleasant tasks of musicians. However, performing in Moscow in the spacious hall of the State Kremlin Palace on the day after International Women's Day, is the choir's personal gift to all of Moscow's ladies.