Britain is becoming increasingly well-known for its enclaves of wealthy Russians — from Roman Abramovich's ownership of London's Chelsea F.C. soccer team to the voyeuristic "Meet The Russians" reality show on FOX, wealthy Russian emigres have gotten plenty of headlines in London.

However, a new wave of Russians is headed further north, to Aberdeen and the Scottish region of Speyside, where the booming oil industry and the lure of plentiful Scotch whiskey have lured many wealthy Russians.

"The Scots welcome wholeheartedly all tourists from any part of the world," said Elena Sargeant, head of TransAberdeen Languages and Tours, a company offering interpreting services and tours aimed at Russians. "Russian tourists in particular are very welcome because they are very kind, polite, very well-behaved, very knowledgeable about Scottish and British history," Sargeant added.

Sargeant said numerous Russians and Russian speakers from the former Soviet Union lived in Aberdeen, working in positions ranging from company directors and university lecturers to cleaners and laborers. The number of Russian speakers has steadily grown in recent years, with a large influx of immigrants from the Baltic republics.

The growing local population of Russians, as well as growing numbers of Russian tourists — Russian visitors to the U.K. have risen by more than 60 percent since 2009 — has led to a noticeable number of wealthy Russians visiting Speyside, the region around Aberdeen, which is known for its great quantity of single malt whiskey distilleries.

"We do get a lot of Russians coming in, and luckily they do have a lot of money," said Michael Lord, proprietor of "The Whisky Shop" in Dufftown. While tourism in general has declined since the economic crisis, wealthy Russians have helped to make up for losses with extravagant spending. 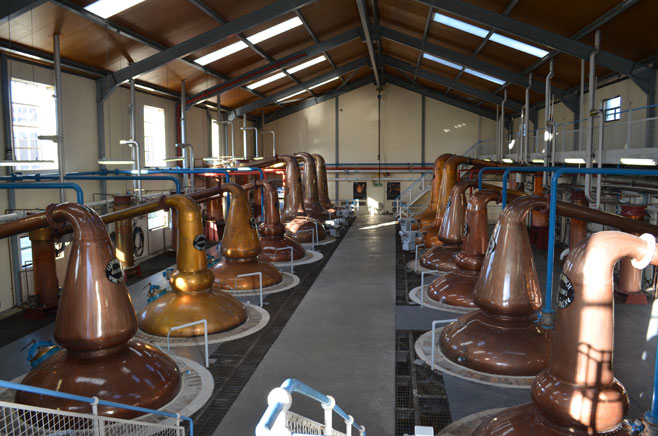 D. Garrison Golubock / MT
Each distillery has a unique set of stills, like these at Glenfiddich Distillery.

While stereotyped as alcoholics, Russians traditionally have had little exposure to whiskey. As single malt Scotch whiskey became available in Russia after the collapse of the Soviet Union, prices were extremely high and availability was limited to only the most elite stores. However, this exclusivity seems only to have increased whiskey's popularity among a certain set of rich Russians, many of whom are now exploring whiskey connoisseurship.

Sandy, a guide at the Glenlivet Distillery, said he had seen numerous Russians on tours who had a fairly good taste for whiskey, much more discerning than the French. He added that Russian women in particular seemed to be getting into Scotch whiskey and that he had encountered several groups of young Russian women traveling together and tasting whiskies. This would seem to belie the common stereotype of Russian men being more into alcohol than women, yet other people in the Speyside whiskey industry also reported seeing more Russian women than men.

Despite the increase in Russian tourists, it is still relatively difficult for Russians to travel to Speyside — there are no direct flights to Aberdeen, and the new EasyJet route to London does not allow for an easy connection, forcing most Russians to fly through Paris or Amsterdam to get to Speyside. Once in Speyside, Russians are faced with limited public transportation to get to the distilleries.

Once again, these limitations mean that only the wealthiest Russians can afford to visit Speyside. Andrew, a local driver and tour guide, recounted a story of a wealthy Russian renting an entire private train to take his family to tour distilleries. While most Russians simply rent cars or hire drivers, the expense is still substantial.

The language barrier may present an additional problem for many Russians, as practically no Scots speak Russian and very few distilleries offer any Russian language information. At present, services like Sargeant's TransAberdeen company offer translation services, and it seems likely that the local tourism industry will soon adapt to serve the growing numbers of Russian tourists.

The yearly Speyside Whiskey Festival is already hoping to increase the number of Russian visitors. Ann Miller, brand ambassador for Chivas Brothers and festival organizer, said that Russians were one of the top groups targeted for growth by festival organizers in coming years. While 2014 saw record ticket sales for the festival in all categories, organizers did note a continuing rise in the number of Russian visitors, which may be aided by the ongoing 2014 U.K.–Russia Year of Culture.

While Moscow's non-elite drinkers may not be able to make it to the festival, one can always hope that Russian consumers will develop enough of a taste for whiskey to make it widely available in their home country. Perhaps the next Russian tycoon to invest in Britain will buy a whiskey distillery and transfer it to Russia!