Nowadays, Russian characters in British and American drama often fall into stereotype images of classical literary characters, Cold War warriors, revolutionaries and dissidents. Viewers will soon witness a new attempt by a foreign actor to portray a Russian on screen, as Britain's most popular drama series, "Downton Abbey" is to feature its first Russian character.

67-year-old Croatian actor Rade Sherbedgia — whose career embraces roles in such productions as "Eyes Wide Shut," "Mission Impossible II"  and "24: Season 6" — will play a Russian refugee, Kuragin who has fled the Russian revolution after World War I and will enter the lives of the masters and servants at fictional Downton estate in 1920s Yorkshire. Viewers will be introduced to Kuragin when Series 5 airs in Britain this fall, in the U.S. in January 2015, and then pretty much everywhere as the series broadcasts in 200 markets.

More often than not, when a Russian character opens their mouth on English-language television, the accent is located somewhere near London or elsewhere in Britain, rather than Moscow, such as Joe Wright's highly anglicized 2012 screen version of Anna Karenina that featured Keira Knightley as Anna, Jude Law as Karenin and Aaron Taylor-Johnson as Vronsky. Or Sir Kenneth Branagh — a native of Belfast and Reading — as the oligarch villain of "Jack Ryan: Shadow Recruit." Or going back to 2001's ambitious retelling of the siege of Stalingrad, "Enemy at the Gates," which placed a quartet of English actors as the Russian participants: Joseph Fiennes, Jude Law, Rachel Weisz and Bob Hoskins, as a Cockney-sounding Khruschev.

But in 2014, it is the Cold War which still captures the imagination and provides dramatists with an image of Russians on screen. It dominated the lives of so many in Europe and the U.S. for four decades — from the Red Scares of the early '50s to the collapse of the Berlin Wall in 1989 — and it still holds a fascination as a subject for popular culture.  Take the U.S. FX Channel's television drama "The Americans," which aired in 2013 — a second series will screen in the U.S. between February and May. Two KGB moles live their lives as ordinary Washington, D.C., citizens called Elizabeth and Phillip Jennings — the Russian characters are, of course, played by an American and a Briton, Keri Russell and Matthew Rhys. Both conform to the Cold War Russian stereotype.

A 2013 episode of the BBC's globally popular science fiction series "Doctor Who" was even titled "Cold War" and took place entirely aboard a Soviet nuclear submarine beneath the Arctic ice in that flashpoint year of 1983 when relations between East and West were at their worst.  Here, the Soviets were not the threat, but a rampaging alien recovered from the ice which sought to launch a nuclear strike that would trigger World War III. As so often before, the Russians were all played by British actors. 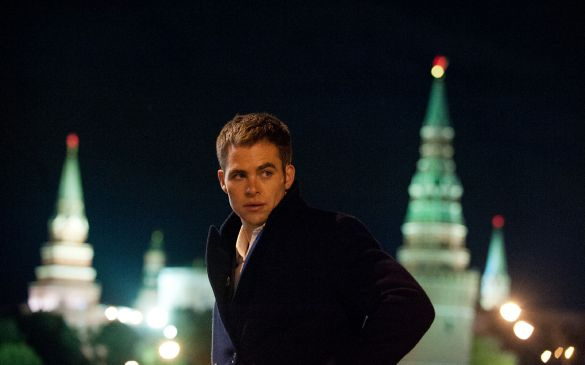 The new "Jack Ryan" film is set in Moscow, yet stars British and U.S. actors.

No doubt inspired by the success of the 2011 film adaptation of John Le Carre's Cold War thriller "Tinker, Tailor, Soldier, Spy" — the definitive Cold War thriller against which most others are measured — later this year the BBC will broadcast a new Cold War spy thriller called "The Game" in which a team of MI5 agents track down KGB sleeper agents hidden in 1970s Britain.

September is the tentative release date for the film version of Tom Rob Smith's 2008  novel "Child 44," wherein Londoner Tom Hardy — best known for playing Bane in "The Dark Knight Rises" — is cast the former Russian agent Leo Demidov investigating a Soviet Ripper-style serial killer in a chilly Stalin-era Russia. Another English actor in the cast is Gary Oldman, who will be remembered being gloriously robust as the ruthless Russian terrorist Korshunov who hijacks the president's plane in 1997's "Air Force One."

Apart from simply listing the many instances in which non-Russian actors portray Russians with varying levels of success in British and U.S. film and television, it is difficult to explain the roots of this phenomenon. While there may have been a shortage of Russian actors in the West 20 years ago, at this point it seem likely that there are crowds of Russian actors who speak English to a sufficient degree to be able to take on a part as an accented Russian villain, or hero.

It must be noted that the Russians are not the only nation frequently given British accents — U.S. World War II movies throughout the 20th century portrayed Nazi officers speaking  Queen's English.

Perhaps in time this standard will change, but in the meanwhile, be prepared for more cockney Khrushchev.