According to legend, the blues were born when Robert Johnson struck a bargain with the devil at a Mississippi crossroads in the 1920s. Boris Litvintsev, the man behind the "The Great British Rhythm & Blues Invasion," a festival that has already begun and will continue throughout all of 2014 in Moscow, has come to any number of crossroads and met a fair share of devils in his own colorful life, but his contribution to the current U.K.-Russia Year of Culture is testimony to the fact that, guided by his love of music, he has managed to keep body and soul intact.

"From the first time I heard English music — the Beatles and Pink Floyd, and especially Led Zeppelin — I knew that music was going to be a big part of my life," Litvintsev said.

As a teenager in Moscow in the 1970s, getting hold of records by the bands he had come to love was no easy task, and Litvintsev can tell many a tale of clandestine meetings in parks and outside Metro stations as he and fellow enthusiasts swapped information on how to obtain copies of releases from abroad.

"It is the way it was in those days," he recounts. "You just got to know other people who had the same interests, and you took your chances."

The collapse of the Soviet Union brought many changes to Russia in the '90s, and for Litvintsev, it was at the end of that decade that he finally got an ­opportunity to really indulge his passion for music. At the time, he was helping his ex-wife and daughter settle in London, and he found time to explore the live music scene there.

"I used to go out nearly every evening, go to different clubs, get to know bands and musicians personally," he said. By simply being friendly and enthusiastic — "just enjoying myself," — Litvintsev quickly built up a large network of contacts in the music business.

Upon his return to Moscow, Litvintsev decided that the best way to maintain contact with the London music scene was by bringing bands across and promoting them in Russia. His first venture in this regard was putting together a tour by a Led Zeppelin tribute band, a project that accidentally coincided with the real Led Zeppelin's reunion gigs at the O2 in London at the end of 2007.

"It should have been perfect," Litvintsev said. "They were friends, and they were eager to come to Russia and the timing was right."

Things did not quite work out how Litvintsev expected, though. Despite investing heavily in the tour, problems with printers, ticketing agents, and just plain bad luck with the weather meant that attendance at the concerts was far short of what was required to make it a success. 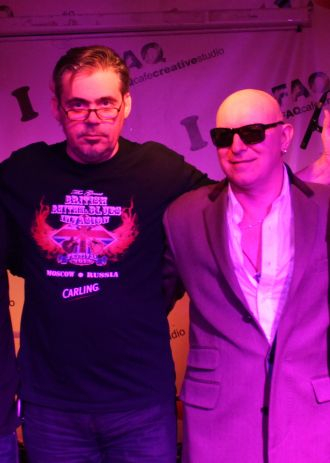 But pay it back he eventually did. It was a difficult period for Litvintsev, but after four years of hard work rebuilding his financial situation and settling lawsuits, he still had enthusiasm for the music and a renewed determination to bring quality music to Russian audiences. This time round, he opted for a smaller-scale, low-key approach.

However, before he could get started again, he encountered yet another setback when, three months ago, he suffered a stroke. But not even this has deterred him in his conviction that promoting the music he loves is the thing that he is meant to be doing.

"I am just more determined than ever to do this," Litvintsev said.

The result is the "Great British Rhythm & Blues Invasion, which kicked off at the end of January with a weekend of sold-out performances by the British blues harmonica maestro Giles Robson. Those performances on successive nights at "Rhythm and Blues Cafe," "B.B. King Blues Bar" and "FAQ Café" established a pattern that will be repeated throughout this year.

"This is the best example of cultural cooperation," says Litvintsev. "We bring great British artists to Moscow and they play with local musicians. They get to know each other, and develop their music together. And the public gets an opportunity to see some great performers they would never have a chance to see otherwise."

The Giles Robson gigs were followed up this past weekend with three shows by guitar virtuoso Eddie Martin. Next weekend sees appearances by the blues and early rock'n'roll influenced Oliver Darling. The February part of the schedule will then be completed when the outstanding British guitarist and vocalist Bex Marshall lands in Moscow as part of her very busy year of world-wide touring.

March will see concerts by the country/soul artist Dani Wilde, the standout blues guitarist and vocalist Big Joe Louis, the Italian blues-rocker Manny Fizzotti, and one of Britain's finest "Chicago blues" exponents, Rollo Markee. And Litvintsev has already booked top names like Franck Ash, Will Johns, Marcus Bonfanti and Ian Siegal for later in the year, with many more to come.

These days the blues is synonymous more with quality musicianship more than with any particular style, and this is reflected in the stellar, eclectic line-up that Litvintsev has put together.

"There will be some very memorable nights," he says with great certainty, and it is hard to argue with him.

Information about dates, times and ticket prices for all concerts in the Great British Rhythm & Blues Invasion can be found on the festival web site at hotdraftproductions.com.