Before sunrise on a recent snowy morning, British filmmaker Hugo Chittenden welcomed me to the office of a local charity for a ride-along as he dispensed supplies to Moscow's homeless.

Chittenden has traveled around the world, working with charity organizations to create a series of short documentary films called "The Volunteer." In his 5th film, Chittenden intends to highlight the plight of those in Moscow and the efforts of the volunteers who work to help them.

After several weeks here, he has found that the popular stereotype that homeless people are unstable, criminal and addicted to various substances is even stronger in Russia than in the West.

Moreover, Moscow's homeless are often targeted by police and vigilante groups for intimidation and violence.

"Often you see them queuing up for food, and they have got massive bruises on their eyes and such," Chittenden said. 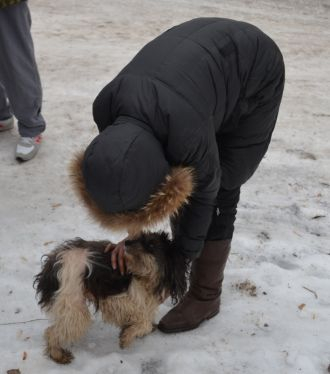 Packs of semi-wild dogs live alongside the homeless in Kapotnya's slums.

Chittenden teamed up with Foodbank Rus, a charity fund that provides materials to a network of smaller groups around the country, and we met at the charity's office on a recent morning. Chittenden supplied the goods himself. Raising money from friends and celebrity sponsors such as James Blunt and Sir Richard Branson, he gathered enough funds to purchase about two weeks' worth of food and a stock of winter clothing.

Now he was documenting the supplies being distributed through Helper and Guardian, or Pomoshnik i Pokrovitel, a small Orthodox Christian charity that delivers goods to the homeless through a fleet of buses.

With only a few homeless shelters, many of Moscow's homeless people take refuge in train stations and abandoned areas, forcing charity workers to drive around to find and assist them.

Taking inventory of the food and clothing, we loaded the goods into a truck and drove them to the office of Helper and Guardian. We arranged the goods in one of the charity's specially designed buses, a vehicle with multiple compartments including a window for dispensing food and a cabin at the back for a doctor to receive patients and dispense medicine.

Several stops were scheduled for the day, some of them at places where the homeless are known to congregate and others intended for "reconnaissance," to make a survey of the area and try to spot homeless people. 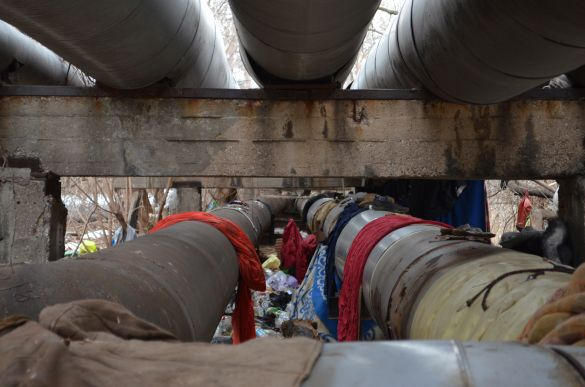 The pipes can reach temperatures of several hundred degrees celsius.

Nikolai Monahov, a social worker with Helper and Guardian, explained the complexities of working with the homeless, saying that it was a challenge to make homeless people aware of the services available to them.

Monahov stressed the importance of creating networks of regular "clients," homeless individuals who regularly come to the same locations to meet the charity buses on their rounds.

Our first stop in the day is in Kapotnya, in the far south of Moscow.

One of the most economically depressed districts in the city, Kapotnya is dominated by the immense Moscow Oil Refinery, which fills the air with an inescapable odor of gas. Yevgeny Semyonenko, a doctor who works with Helper and Guardian, says that just breathing the air close to the plant is enough to make many people light-headed. Long-term exposure can result in serious health problems.

From the center of the plant, a network of miles of pipes radiates outward. Many of these pipes, which carry superheated oil and gas byproducts, can reach temperatures of hundreds of degrees Celsius, and it is under these pipes that a sizable colony of homeless people have chosen to live.

When the Helper and Guardian truck pulled up in the alleyway close to the pipeline, a crowd of about 40 to 50 people was already waiting, most of the regular clients who knew the schedule and expected the visit, as well as a few newcomers.

Not all of those present were homeless. Monahov explained that lots of pensioners living in the nearby buildings could not afford both rent and food, forcing them to rely on charity. One well-dressed elderly woman asked not to be photographed because she did not want her neighbors to know that she relied on handouts. 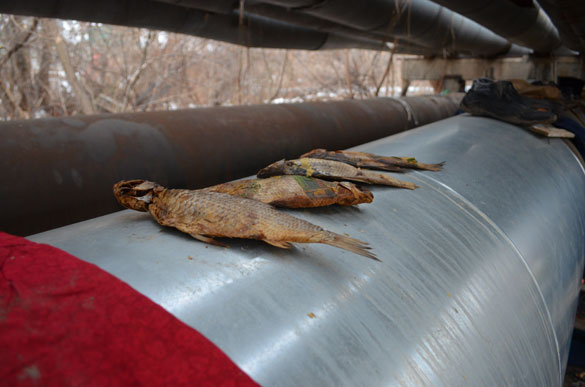 Fish are left out to dry on the pipes.

The people who were truly homeless stood out from the rest — dirty and unshaven, with faces red from cold. They seemed more interested in the winter clothing than the food, and gathered at the back of the truck until all the supplies had been handed out.

As they stood waiting to receive their clothes, I wandered through the crowd and talk to some of them. While a few were drunk and incoherent, and some didn't want to talk, most of them were actually quite conversational. Pyotr, a former longshoreman from the republic of Karelia near Finland, said he had come to Moscow for work, failed to get any, and wound up living on the streets.

He said he had family back home, but they were unaware of his situation, and he had no way of contacting them.

Ivan, a former miner and construction worker from Vorkuta, had a similar story. After losing his job in the mines during the economic turmoil of the '90s, he moved to Moscow, where for some years he made a decent living as a construction worker. However, one day he fell and injured his leg on a construction site. As he had not been wearing a safety harness, his employers declared the accident to be his fault, and fired him without compensation.

Unable to work construction with his crippled leg, Ivan moved to the street, eventually finding his way down to Kapotnya. In his late 60s, Ivan is one of the oldest people living under the pipes, and said he lived separately from the younger men, who tended to drink when they could afford it.

Few women lived under the pipes. I spoke to one of them, who declined to give her name and said that she had only recently lost her apartment nearby and moved under the pipes. She hoped to soon move off the streets, though she did not have a clear idea how she would find a new place to live. 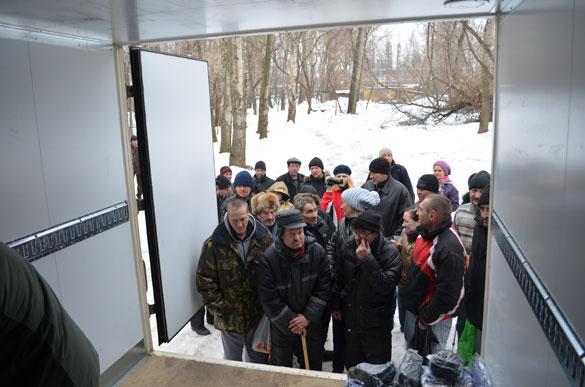 The homeless were glad to get the winter clothing Chittenden had bought.

While many of the homeless had bruises and black eyes, I didn't see any who seemed to be suffering from tuberculosis or the other serious diseases that Moscow's homeless are thought to be a vector for. Doctor Semyonenko said the health problems that he most frequently encountered were caused by the cold — constant exposure to cold, damp, filthy conditions led many homeless to develop boils, ulcers and necrosis.

I followed some of the homeless as they straggled away from the bus to take a look at their shelter under the pipes. The first impression was generally of filth — ragged blankets hung every over the flaking insulation of the pipes, while plastic bottles and cans littered the ground, trampled into heaps of refuse.

However, the shelter did have a distinctly homey feel — the pipes kept the space beneath them heated to more or less indoor temperatures, and dried fish and mushrooms sat atop the pipes, giving off a dacha-like aroma.

A couple of slightly tipsy homeless men lounged on scrounged furniture, drinking tea from a kettle on a small campfire. Together, they laughed and posed for photos. While rejected and homeless, they were not entirely miserable.

Chittenden said he hoped his film, scheduled for release in February, would draw attention to these seemingly forgotten people.

"They do not have the state welfare protection that they would have in Britain or America," he said. "They are left to fend for themselves."

To watch the film once it is released as well as other work from Hugo Chittenden's "The Volunteer" series, check out his website at thevolunteer.com.