One of the reasons that Sochi was successful in getting approving nods from the International Olympic Committee during its bid campaign was the ample amount of lodging space that already existed in the city. Not surprisingly either as multiple sanatoria were built in Sochi while it functioned as the principal Soviet resort. Most of these sanatoria are still in use, but fortunately the city also received some fresher additions to its hospitality base ahead of hosting three major international events in 2014.

Global operators have taken up the management of four-and-five-star hotels and are ready to be some of the first to welcome guests to the Black Sea resort. Their many luxurious offerings are well worth the attention of the Olympic athletes, Formula One racing drivers and G8 politicians who will come to the city over the coming months. You are also warmly invited to join the party. 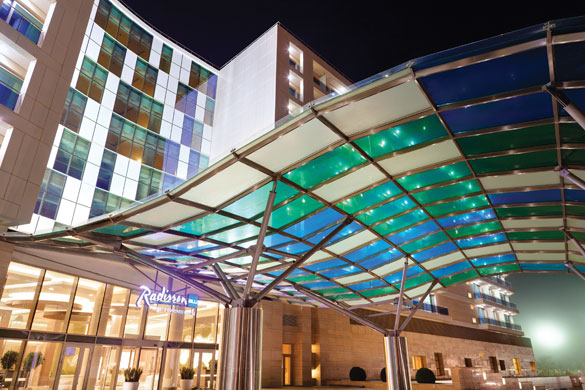 The five-star Radisson Blu Resort & Congress Centre is located so close to the Olympic venues in the coastal cluster that it actually comes inside the area's security perimeter. But the advantages of staying at this hotel are not limited to the Olympic season or Formula One race. Year-round guests can enjoy the breathtaking views of the Black Sea and the Caucasus Mountains from their suite windows, take slow walks along the sea promenade, and explore the nearby Southern Cultures Park.

Each room in Radisson Blu Resort has a safe, satellite television and minibar. A wheelchair-accessible room can be requested in advance. And as you're staying in the world's Olympic capital, don't pass up the many fitness opportunities that the hotel offers. Work up a sweat in the fitness center, complete with modern TechnoGym equipment, and then pamper yourself in the spa. You can take turns going into the Finnish, Russian and Turkish saunas and order some massages and other additional spa treatments. 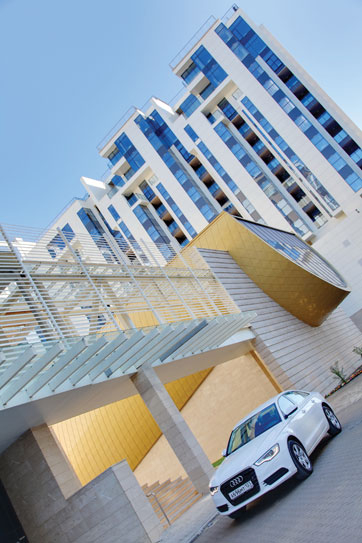 The Russian Seasons gives you panoramic views of all the major sporting events that will take place in Sochi in 2014. The Formula One racetrack runs adjacent to the hotel so you can watch the championship without leaving the hotel. Olympic venues are also just minutes away, though you do have to go through a security check first. International film crews have already booked space on the hotel's roof to film long shots of the celebrations that will take place in the Olympic Park.

The hotel is located 10 kilometers from the Sochi International Airport and is a 10-minute walking distance from the brand new train terminal. Trains come at regular intervals and will whisk you to Sochi or the ski resort at Krasnaya Polyana in less than an hour.

Rooms in this deluxe hotel range greatly in size, starting at the 21-square-meter standard single room to the solitary 310-square meter Russian Seasons apartments. The latter has its own Jacuzzi and Turkish sauna, and is one of the biggest hotel rooms you can book in Russia. All rooms have satellite televisions, minibars, safes, ETRO cosmetics and smooth cotton sateen Frette sheets.

Russian Seasons invites guests to visit its two-level spa complex, the second spa to be operated by the renowned ESPA brand in Russia. Visits to the Finnish, Turkish and Alp saunas, special showers and water foot massages are complimentary for hotel guests. 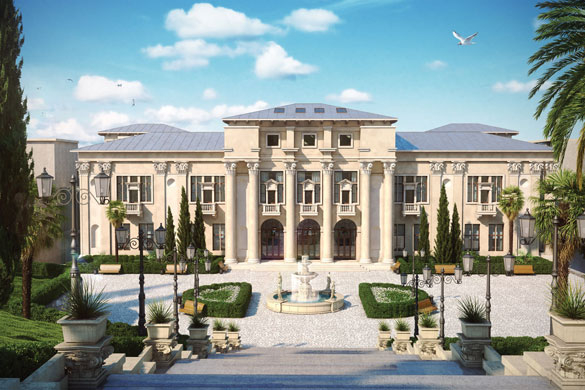 Swissotel Sochi Kamelia is set in a natural park with views of the Black Sea, 23 kilometers from the Sochi International Airport and just 5 kilometers from the railroad station where you can hop on a short uphill ride to the Krasnaya Polyana ski resort. Many of the hotel's rooms have sea views and private balconies or terraces.

The hotel prides itself on promoting Swiss athletic traditions so there are many services to help you get as physically fit and confident as possible. The Spa & Sport complex includes a gym, sauna and swimming pool. The gym has a variety of modern equipment, while the spa features six treatment rooms, two saunas and jetted pools. Swiss-made organic essential oils are used in the massage sessions.

To treat yourself after all these procedures, head to the Rivage restaurant, which specializes in healthy Mediterranean cuisine, or the Swiss-inspired European Cafe Kamelia. 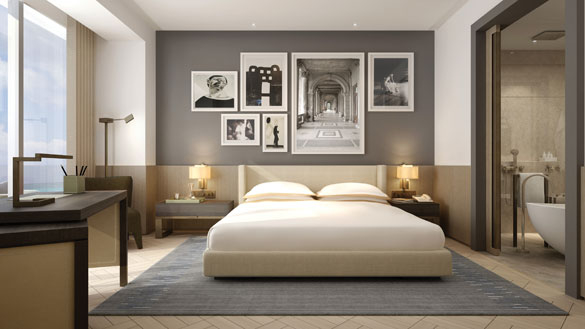 Rising like a glimmering beacon out of the heart of Sochi, the Hyatt Regency hotel has transformed not only the city center's skyline but also the lifestyle of its future guests. The hotel epitomizes comfort and luxury. Its 171 rooms and 28 suites have balconies and floor-to-ceiling windows with dazzling views of the Black Sea or the Caucasus Mountains. The hotel's entrance leads out to Art Square, which puts guests within a short walking distance of Sochi's key attractions and restaurants. Just a couple of steps away are the beach and sea promenade.

The hotel's general manager has previously worked as an executive chef at the Ararat Park Hyatt in Moscow so he pays special attention to the food that is served in the Sochi hotel's multiple dining venues. Parterre is the more spacious of the two restaurants and works through all meal times. It serves European and Russian dishes. The specialty restaurant, Bourride, focuses on Mediterranean cuisine. 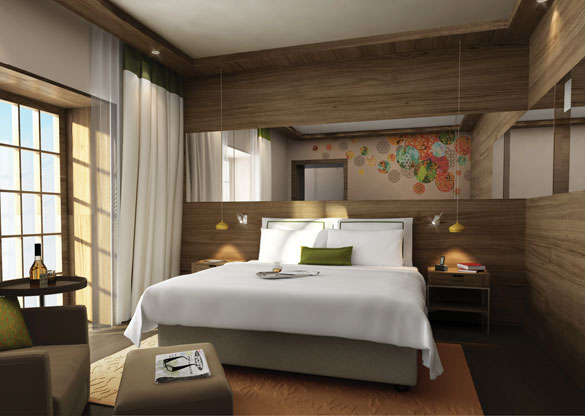 The five-star Swissotel Krasnaya Polyana is located in the central square of the upper skiing village, minutes from skiing facilities and shopping venues. The atmosphere of this scenic location is a serious motivator to take up healthy living, and the hotel dutifully helps its guests to do just that.

After you've finished conquering the ski slopes, take the time to rejuvenate at the hotel's Purovel Spa & Sport complex. There you'll have the options of going to the gym, relaxing in the sauna or steam room, or getting one of the spa's signature massages.

The dining venues at the hotel also promote healthy living with the chefs prioritizing regional and seasonal products in their dishes. The Cafe Carousel has an urban, hip feel. The menu is European with a few Swiss and local interpretations. The Bison Bar serves brasserie-style meals, which also have some Swiss undertones. The Bubble Bar is a luxury, exclusive venue that is accessible only to club members. It has a champagne bar, cigar lounge and wine cellar, and is a great choice for hosting private dinner parties or VIP meetings.

Set in the center of the Rosa Khutor mountain resort, the business-class HELIOPARK Freestyle hotel is a great place to stay — whether you have tickets to some world-class sports championships or are planning to tackle the mountain slopes yourself. The lifts are located a short distance from the hotel and will take you to the key ski runs of varying difficulty.

There are plenty of local activities to take part in during the warmer months as well. You can go on a hike, rent a Jeep, maneuver a raft through the mountain rivers and lakes, or go fishing. Needless to say, you'll get all the health benefits, including the fresh mountain air, no matter what time of the year you schedule your visit.

The HELIOPARK Freestyle hotel also offers plenty of nighttime entertainment options so you won't miss being away from the Sochi city center — though, if you do feel like going there, it's only a short train ride away. Stretch out sore limbs as you dance at the Hot Ice club, play billiards with friends, or sing your heart out at the karaoke lounge. Just make sure not to stay up too late so you can hit the mountain slopes in full force the next morning.

Radisson Lazurnaya was one of the first internationally operated hotels to open in Sochi and has been a welcoming refuge for the foreigners arriving to a strange, unknown city. The hotel might have lost its unique status in light of the major construction that took place in the city in recent years, but it is still a top-rated destination for Sochi visitors and, if anything, its services have gotten better over the years.

The hotel has 299 rooms and suites, as well as a Royal Club with deluxe suites and villas. Russian, European, Mediterranean and Italian flavors are blended skillfully at its three restaurants, cafe and lobby bar. Radisson Lazurnaya can also boast of a fitness center, indoor and outdoor pools, saunas, whirlpools, tennis courts and a beauty salon.

Thanks to the hotel's prime location on the Black Sea coastline, guests get to enjoy access to a private beach and sample the food that is served at the beachside restaurant.

Rodina boutique hotel is as exclusive as it gets. There are only 40 rooms in this small luxury oasis, which is set in a spacious subtropical park near the water so you are guaranteed both privacy and calm. All the rooms — apartments or deluxe suites — had their interior design carried out by the court designers to Queen Beatrix of the Netherlands.

The hotel has one of the biggest spas in Europe with its lineup of exclusive treatments, multiple stylish restaurants, tennis courts, outdoor and indoor pools, golf carts for getting around the large park, and even a library where you can dive into the atmosphere of 1930s Soviet Union.

This four-star hotel has 200 rooms, 21 of which are wheelchair-accessible and all of them nonsmoking, a restaurant that serves regional cuisine and a lively bar.

Mercure's seaside location puts it within a close walking distance of Sochi's main tourist attractions, including the seaport terminal, Festivalny Concert Hall and Winter Theater. You are welcome to bring your pets along for the stay. Dogs, in particular, will probably appreciate the hotel's location when you take them out for their daily walk.

Unlike the staff at the many hotels that opened mere days before the Winter Olympics, Tulip Inn's employees have had the luxury of starting their work months ahead.

This means they also had the time to find and fix any problem areas, which guarantees you a comfortable and well-thought-out stay. The hotel's 148 rooms offer views of the mountains and Mzymta River. There are modern gym facilities, a Finnish sauna, a beauty salon and conference rooms. Meals at The Amsterdam restaurant have Dutch undertones, but also pay respect to regional products and traditions.

The Grand Hotel Polyana complex is a city in itself. You can get anything you need without getting outside of its territory. With regards to accommodation there are 413 rooms, or 15 wooden villas if you prefer more privacy. A gym, four heated indoor and outdoor pools, tennis courts and different saunas will help you keep up your fitness regime. The Chandelle Blanche Medi Spa & Beauty Lounge will bring out your beauty. Food will be served to you at the complex's six restaurants and bars. And to entertain you, the staff will put on films at the premium-class cinema or, if you're staying with younger guests, provide entertainment in a children's playroom.

But although you'll have everything at your fingertips when you stay at Grand Hotel Polyana, we're ready to bet that you'll still venture out of the hotel and won't regret it! Staying mere minutes away from the ski lifts, you won't be able to pass up the adventure that awaits you just outside your door.