On Friday, the National Center For Contemporary Arts opened the festival "Beginning of the Time of the Composer" dedicated to Russian composer Igor Stravinsky. The festival is timed to coincide with the 100th anniversary of the premiere of his opera "The Nightingale" and is intended to show the composer's creative development.

The festival consists of two exhibits aimed to display an exclusive collection of photos, video installations and paintings made by modern artists connected with different periods of Stravinsky's life. Six musical concerts, a unique film "Once at the border. Igor Stravinsky" directed by Tony Palmer and an evening of animation films based on the composer's music will be included in the festival as well. 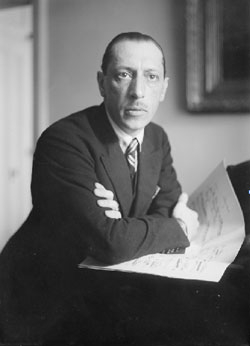 Igor Stravinsky was born into a musical family, his father a bass singer at St. Petersburg's Mariinsky Theater, and he was heavily exposed to classical music from an early age. Stravinsky started taking music lessons at the age of nine, and at the age of 22 he began studying composing under the direction of Rimsky-Korsakov, one of the most influential of Russian composers. Stravinsky's life led him to many corners of the globe — continuously giving performances on tour, he lived in France and later in , where he died at the age of 88 before being buried in Italy next to his wife.

Stravinsky was one of the founders of the style of music termed neoclassicism, and he carved his own niche in the history of the 20th century. His ideas had a great influence on contemporary popular culture, and the images and intellectual movements that he contributed are still highly relevant in the modern art world.

The first day of the festival started with the opening of the exhibition, which was unusual in its focus on integrating classical art with exhibition modern technologies and making acoustics visual. The opening was followed by a musical concert with prominent musicians from Japan, Vietnam and Russia.

Festival coordinator Anastasia Kozachenko, a descendant of Stravinsky, said the festival was "a kind of life project for me," adding that "it took years to make it come to life from the moment of the emergence of the idea."

"It is a rather intimate occasion for me that shows the way I see Stravinsky," Kozachenko said. Many of the exhibits are taken from Anastasia's private family collection, while others are from funds and museums in St. Petersburg and Switzerland.

One interesting detail is that the festival takes place at the Alexander Scriabin Memorial Flat Museum. Scriabin, a contemporary of Stravinsky who has since fallen greatly in popularity, was a rival of Stravinsky, and the two were known to loathe each other.

The "Beginning of the Time of the Composer" festival will run until Feb. 23 at the Scriabin Memorial Flat Museum, 11 Bolshoi Nikolopeskovsky Pereulok. For more information, see ncca.ru.